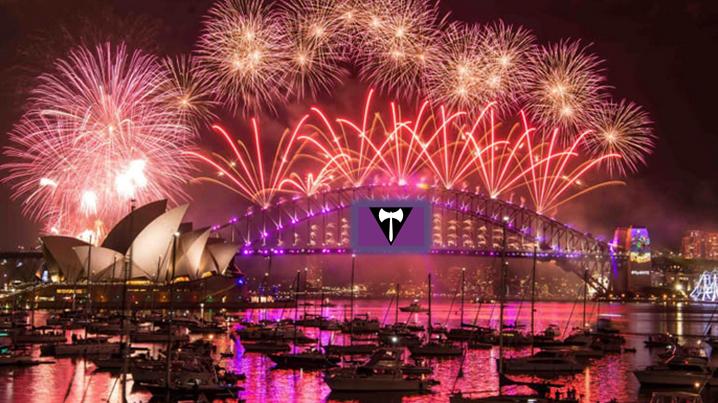 Purple lesbianism hijacks Sydney NYE Fireworks.  It only lacked the labrys symbol on the Bridge. 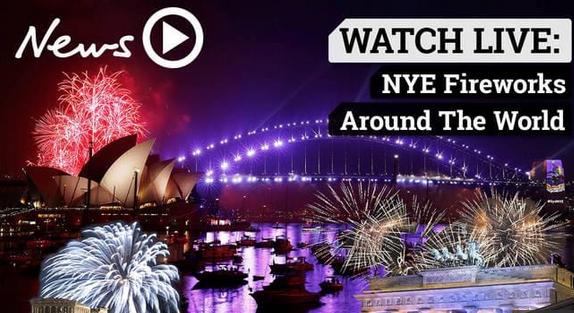 For Sydney’s NYE-2019, the pre-announced theme of this year’s purple fireworks show was apparently the ‘Pulse of Sydney‘ with the display featuring gold, silver and purple pyrotechnics.

Why this particular choice of colours then?  The colours hold homosexual symbolism.

The dominance of purple coloured fireworks and the tribute to the late Aretha Franklin (The ‘Queen’ of Soul) had a double meaning.  The fireworks were timed to Franklin’s famous hit ‘You Make Me Feel Like A Natural Woman‘ and included symbolic heart-shaped fireworks and a smiley-face below the Sydney Harbour Bridge.  Obvious to all revellers, the colour purple seriously dominated the fireworks throughout the twelve-minute display.  So what was all that about? 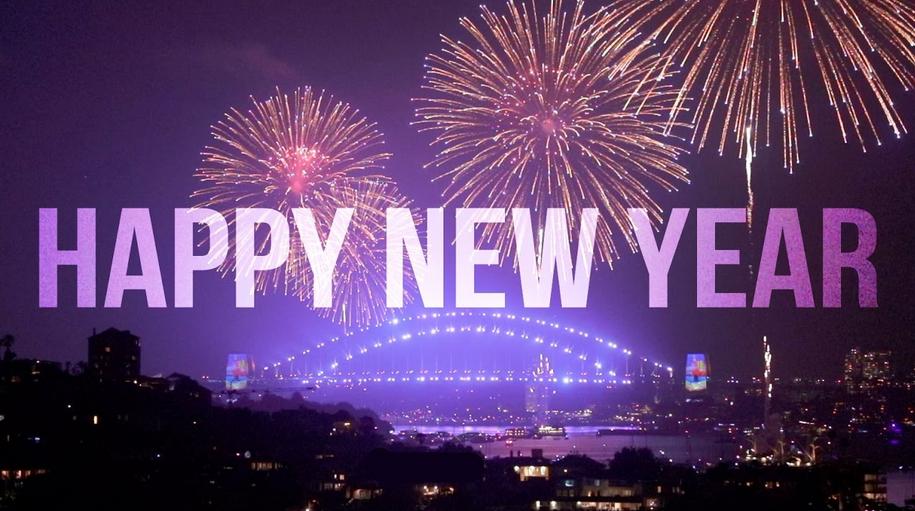 As much as the ‘Pulse of Sydney‘ theme was obscure, the obvious and repeated messages became clear – it was Moore’s attempt to legitimise and mainstream lesbianism.  Purple is the adopted colour of the extreme lesbian lifestyle movement.  Since 1970s militant feminism, Clover Moore has publicly championed as a politician.  But lesbians, ‘You Make Me Feel Like A Natural Woman‘?   Really? 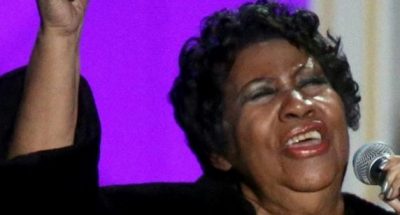 “As the world lost another light with the passing of pop and jazz diva Aretha Franklin, the LGBT community lost another ally and icon. Franklin died today at the age of 76 due to pancreatic cancer at her home in Detroit.  Many of the LGBT icons mourned her death with Elton John, a friend of the singer, posting a tribute on social media.  “The loss of Aretha Franklin is a blow for everybody who loves real music: Music from the heart, the soul and the Church,” Elton wrote.  Franklin’s last public performance was during Elton’s AIDS Foundation benefit in New York last November.  the LGBT community cited Franklin’s songs that guided them and gave them hope, like “R-E-S-P-E-C-T” and “Pride (A Deeper Love).” 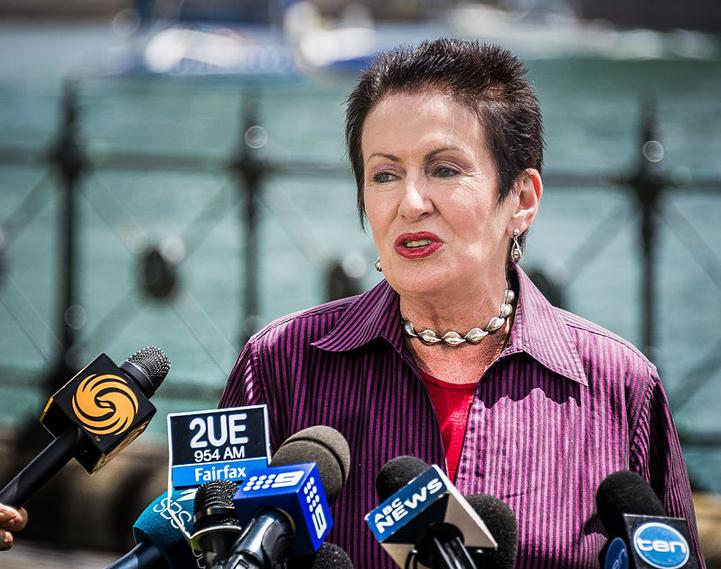 Owns a wardrobe of purple

Sydney’s famous New Years Eve fireworks display, at both 9pm and midnight, initiated back in NYE 1996 as free fun family entertainment along the harbour-side parks and gardens to celebrate Sydney’s natural harbour and to welcome in the new year.

9pm Family fireworks:  “The first fireworks allow our littlest spectators, who may nod off a little earlier, the chance to see a fantastic display. The display includes fireworks released from barges and the Sydney Harbour Bridge.”

But the event was never intended to be politicised nor to convey ideological messages.

But as Lord Mayor, Clover Moore has used and abused her political position and influence in Sydney politics since 1988.  She peddles her personal extreme ideologies at Sydney ratepayers’ expense, most obscenely with her ludicrous and extravagant public art commissions. 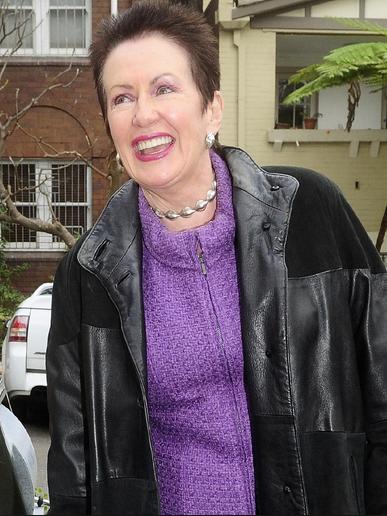 Despite being heterosexually married, perhaps by convenience, she has set herself up as Sydney’s inner city champion of sexual deviance – lesbian, sodomite, bisexual, transgender, intersex and otherwise LGBTTQQFAGPEDOBDSM+ alternative lifestyle fringe dwellers.  Moore has lobbied for and instigated the 1993 Homosexual Anti-Vilification Bill (NSW), anti-discrimination laws (to censors anyone critical of deviant lifestylers), she outlawed poof bashing in Darlinghurst, and lobbied to legalise deviant relationships and marriage.

Moore was the first councillor to publicly support the Sydney Gay and Lesbian Mardi Gras in the 1980s and the first Member of the Legislative Assembly to march in the Parade in 1992. 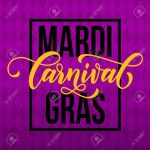 The Sydney homosexual scene attraction to the colour silver stems from the disco ball and the Sydney Gay and Lesbian Choir’s ‘Silver Linings’ concert series.

Moore continues to champion the gregarious sexual deviant extremists as a “resilient and vibrant community”.  She plugs the deviant lifestyle, frequently flying symbolic rainbow flags and banners outside Sydney Town Hall and encourages the painting of rainbow-coloured pedestrian crossings in Sydney’s notorious homosexual precinct of Darlinghurst .

Moore:  “We have this amazing multicultural, harmonious community here in the city…”.  Yet typically 97.4% of Australians indentify as heterosexually normal. 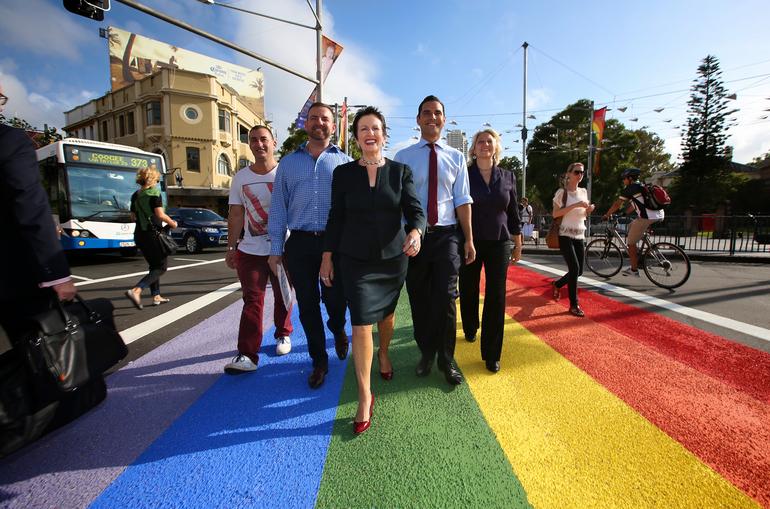 All this of course is designed to lead to socio-economic collapse of the nation-state, anarchy, United Nations One World Communist Government and implementation of Agenda 2030.

Tennis champ Margaret Court has warned that a lesbian lobby is out to recruit children using its mind-control techniques and popular culture.

Purple is the chosen colour of The Greens stooge, Dr Kerryn Phelps, in her recent electoral campaign for a federal seat in Canberra.  She’s a self-confessed lesbian and a vocal lobbyist for lesbianism to be legitimized and mainstreamed. 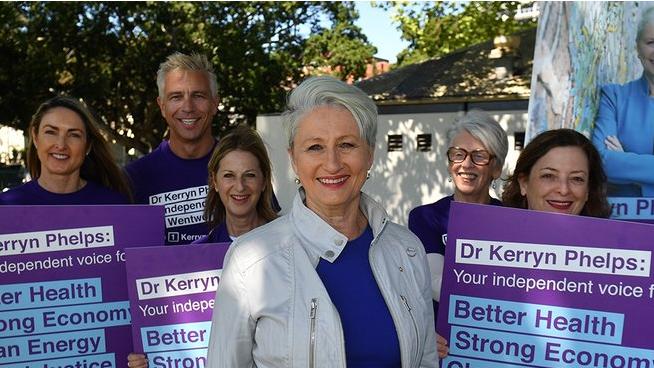 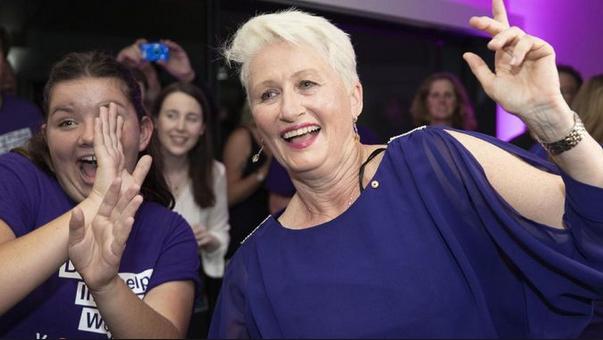 Moore and Phelps get on like a house on fire.  Phelps replaced Malcolm Turnbull in Sydney’s elite harbourside federal seat of Wentworth.  She’s Patron of ACON’s Pride in Health+Wellbeing programme.   ACON stands for AIDS Council of New South Wales.  It’s website is dominantly purple in colour and states: 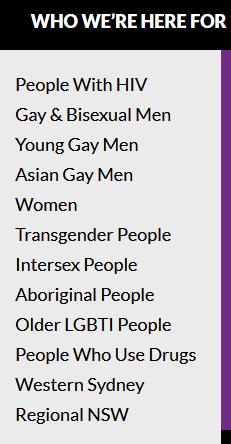 Phelps is also ambassador for the Pinnacle Foundation which helps..

“LGBTTQQFAGPEDOBDSM+ young adults to reach their full ‘potential’, and overcome their disadvantages.  Our goal is to help young people position themselves for success, transform society for the better, and enable them to be an inspiration to the generation that follows them.”

So it’s about trying to legitimise the deviant lifestyle into mainstream society.  It’s choice of colour? 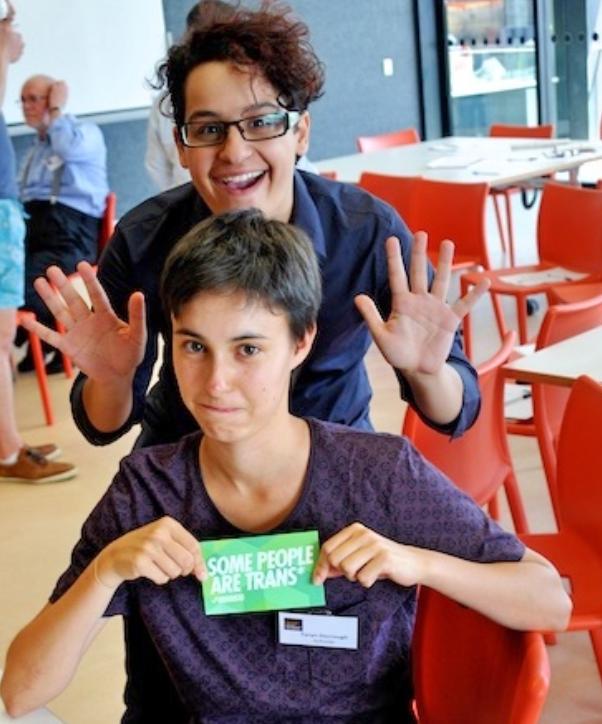 In purple of course 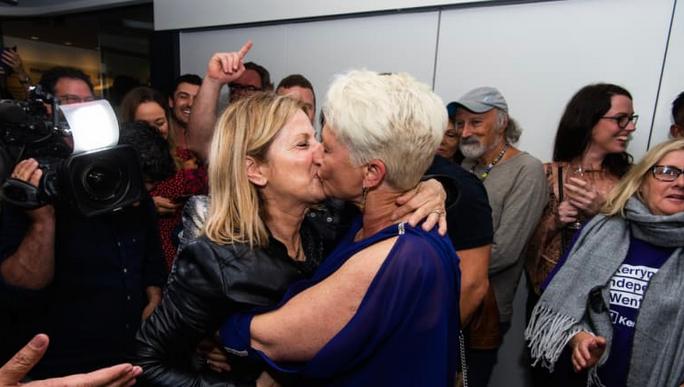 Why purple?  Who knows?  Most of the other colours were ideologically taken, and purple was available, alternative and lurid.  The same could be asked why homosexuals have stolen the rainbow as their symbol.  Rainbows are natural phenomenon, whereas homosexuality is hardly found in the natural world.

So Moore has appropriated $5.78 million of Sydney ratepayers money to fund 8.5 tonnes of fireworks.  But instead of the fireworks simply being Sydney’s fun celebration of New Years Eve for 2019, it was hijacked into deviant propaganda show over 12 minutes promoting lesbianism to a global audience. 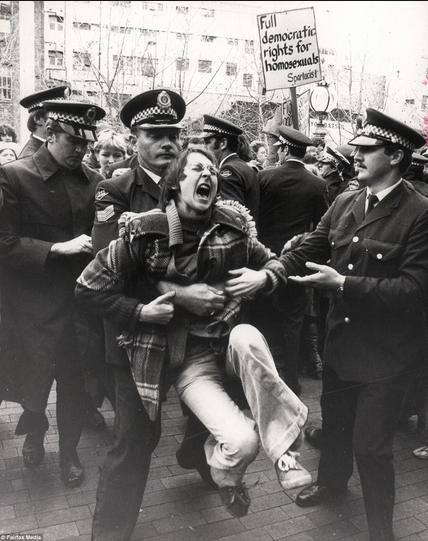 Before colour photography, but one can only surmise – ‘purpled’

Sydney promiscuous homosexuals actually won their rights claim six years later in 1984 when the Neville Wran Government amended the Crimes Act and decriminalised homosexual acts.  So that ought to have been the end of the matter.  But like all Leftist social re-engineering agendas, the 1978 march became a deviant wedge of depravity, with every year getting more and more extreme.

In 1982, Doctor Ron Penny was the first in Australia to be diagnosed with AIDS in a Sydney hospital.  He contracted the infectious disease by engaging in homosexual acts.  The rights march has morphed into an annual LGBTTQQFAGPEDOBDSM+ pride parade and sexually explicit fashion carnival that gets televised globally.   It has become a leftist ideological campaign to try to legitimise and mainstream the deviant lifestyle, into whatever a perverted imagination may venture.  The Mardis Gras immorally promotes sexual deviance, yet despite the advent of a anti-retroviral drugs, there is no vaccine or cure for HIV/AIDS.  Deviant sex is a Russian Roulette lifestyle and HIV/AIDS remains a death sentence. 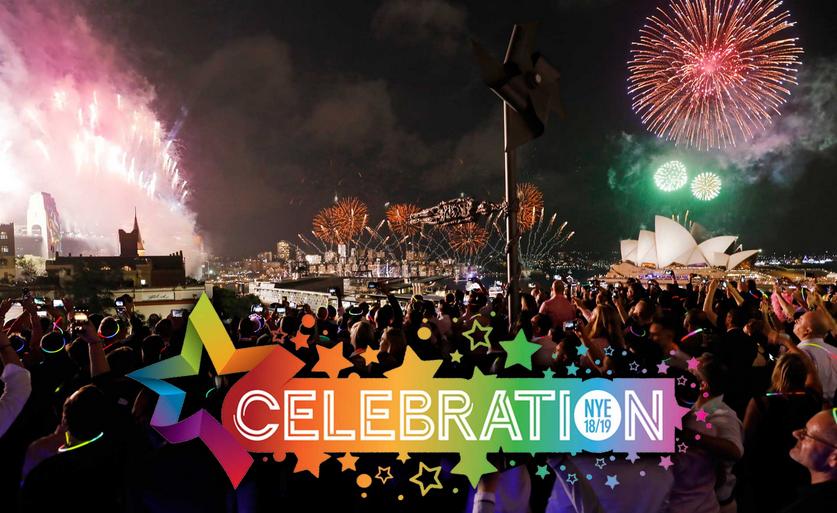 Celebrate Gay NYE in Sydney, with the only Gay and Lesbian New Year’s Eve party on Sydney Harbour.

According to the City of Sydney official NYE website, over 1 million people will be crowding into the Sydney foreshore to watch this year’s fireworks. That’s literally thousands of people elbow to elbow crushed in from early afternoon to try to get a glimpse of the spectacle. Hot, sweaty, sticky bodies with eskies, chairs and children.

Celebration NYE18/19: WHITE is your ticket to freedom! Escape from this maddening crowd and ascend to a cool gay oasis with unobstructed rooftop views of Sydney Harbour, taking in both the Sydney Harbour Bridge and Sydney Opera House, all with easy access from Circular Quay train station.

Entertainment will be provided by not just one, but two amazing world-class Sydney DJ’s! Returning for his fourth fabulous outing on the deck is DJ Mark Alsop. With over 30 years experience behind the decks in Australia, Mark kicks off the night with smooth cocktail sounds that morph into groovier beats as the sun sets and the night gathers round us. Filling out our second spot and having the pleasure of taking the party home after midnight is the gorgous DJ Amanda Louise. Considered a breakaway Sydney DJ, Amanda Louise has provided an eclectic mix of deep, classic house and tech house music for audiences locally and abroad since 2013. Both DJ’s will entwine and entangle themselves around each other in the middle of the evening, in a speciola hour we call our ‘tête-à-tête’ set. Theme for this musical collaboration to be announced soon. Wonder if it will be shiny and sparkly like silver?

Our DJ’s are but the tip of the iceberg, and they will be aided and abetted in their entertainment duties by the incomparable Frock Hudson, direct from South Yarra. As MC for the night, Frock will also keep you up to date on the evening’s festivities and happenings on the harbour.

The lovely queen of Sydney hosting, Gael Donaldson, will greet you at the MCA entrance and ensure that all is in order, before ushering you on to your exclusive access up to the Sculpture Terrace, where you will be greeted with a glass of bubbles (the first of many) and the breathtaking rooftop views out across Circular Quay.

Indulge in a mouth-watering selection of canapés to start your night, with fantastic beverage package (see below for details) to help keep you in the mood. A full buffet and exotic food stations will later help whet your appetite for excitement as the evening deepens.

In celebrating our tenth year, we are giving things a little twist! You must note this year’s special dress code: WHITE. We are requiring all guests to wear white and/or silver in a cocktail or elegant style, to gain entrance to the party.

Make a statement, be remembered! Glamour, Gorgeousness and Gay! and WHITE!

This amazing event runs for six fabulous hours and offers a ‘bucket list’ experience for you and your friends.

Tickets are strictly limited to 300 only and last year we again sold out before the event. That means no door sales!” 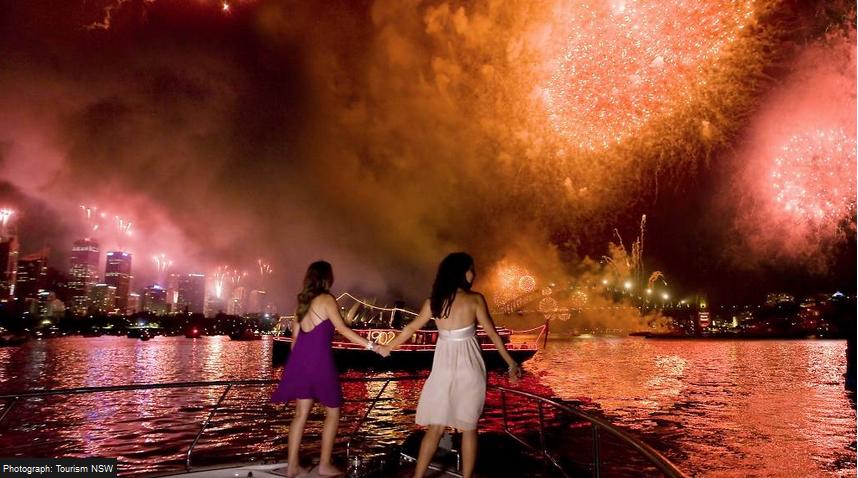 Even Tourism NSW is in on purple lesbian tourism