China’s Communist puppet President Xi Jinping must be brainwashed into believing he’s some kind of born again dynastical emperor by unilaterally invading the Spratly Islands off the coast of the Philippines, some international 500 km from China.

Communist China has been ramming and terrorising neighbouring Philippine fishermen from a reef near the Philippines for four years. 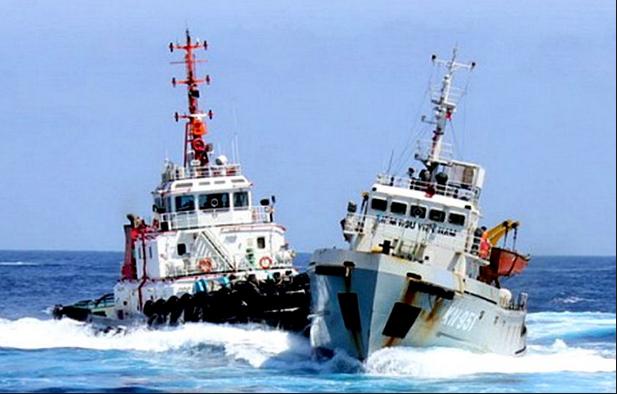 It is harder to be poor without murmuring than to be rich without arrogance. 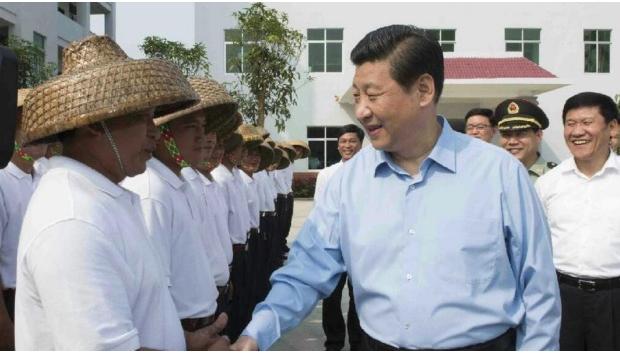 Perhaps the South China Sea should be renamed the ‘Sea of Maturity‘ to take a leaf out of the more mature ASEAN Charter promoting international accountability and compliance.

Perhaps this could teach China into First World behaviour and civilized maturity away from Maoist emulation of North Korea’s bi-polar Kim Jong Un.

On July 12, 2016, a ruling by the Hague Tribunal that China has no historic or legal claim to islands in the South China Sea was ignored by China. This brings the Third World superpower into conflict with regional powers and other states which use and rely upon the international sea lanes.

It is the reaction of Chinese migrants and students in Australia which is a source of concern. While it is true that Chinese state controlled companies have been taking over Chinese language media in Australia, most Chinese hear already the call of Mao’s tyrannical and murderous motherland – and urge all of us to accept China’s claims.

As China’s imperialist interests in Australia grow – over our real estate, mines, farmland, businesses and industry – the attitude of Chinese groups in Australia are of genuine concern.   China has acquired a wealth or our business and political and media opinion-makers to propagandise that its interests are benign. The grab for power over the South China Sea suggests anything but.

The international tribunal in The Hague delivered a sweeping rebuke on Tuesday of China’s behavior in the South China Sea, including its construction of artificial islands, and found that its expansive claim to sovereignty over the waters had no legal basis.

The Philippines filed its case in 2013, after China seized a reef over which both countries claim sovereignty. There has been speculation that the Communist Party of China might respond to the decision by building an artificial island at the reef, Scarborough Shoal, a move that could set off a conflict with the Philippines. 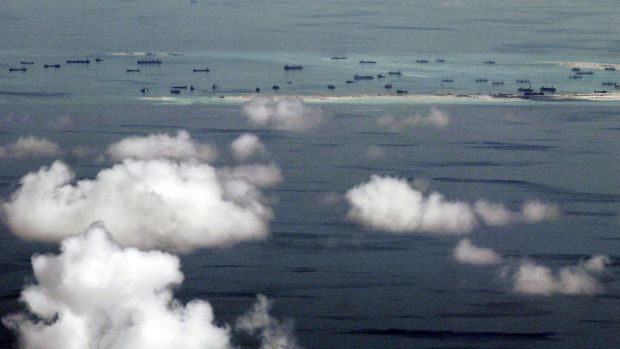 In a judgement that is even tougher on the Communist Party of China than experts anticipated, the Permanent Court of Arbitration in The Hague has rebuked China on everything from its interference in its smaller neighbour’s fishing to the environmental devastation wrought by its large-scale construction of islands on fragile coral reefs.

The tribunal threw out China’s “nine dash line” which asserts the country’s claim to most of the South China Sea based on historic rights, insisting that the United Nations Convention on the Law of the Sea is the prevailing law.

“The tribunal concluded that there was no legal basis for China to claim historic rights to resources within the sea areas falling within the ‘nine-dash line’,” it said in a statement. 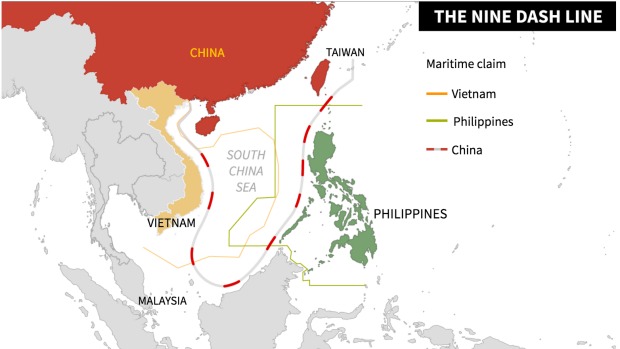 Crucially the judges found that the Communist Party of China‘s artificial islands in the Spratly Islands archipelago do not generate any extended maritime zone because the natural features could not sustain human habitation.

This means it has violated the Philippines’ sovereignty where building has happened within the smaller country’s exclusive economic zone such as Mischief Reef on which the Communist Party of China has placed a military-grade airstrip.

Chinese law enforcement ships had “created serious risk of collision and danger” and thereby breached a UN convention on safety at sea while obstructing Philippines fishermen.

It had also breached Philippines sovereignty by interfering with its fishing and petroleum exploration.
Analysts expressed astonishment that the ruling was so uncompromising in its treatment of China’s behaviour.

The tribunal also said that China had violated international law by causing “irreparable harm” to the marine environment, endangering Philippine ships and interfering with Philippine fishing and oil exploration.

The judgement sets the scene for a tense period in international diplomacy, with the Communist Party of China likely to consider stepping up its activity in the waters as a show of its disregard for the tribunal’s jurisdiction.

The landmark case, rightly brought by the Philippines, was seen as an important crossroads in China’s rise as a global power and in its rivalry with the United States, and it could force the Communist Party of China to reconsider its assertive tactics in the region or risk being labeled an international outlaw. It was the first time the Chinese government had been summoned before the international justice system.

In its most significant finding, the tribunal rejected China’s argument that it enjoys historic rights over most of the South China Sea. That could give the governments of Brunei, Indonesia, Malaysia, Taiwan and Vietnam more leverage in their own maritime disputes with the Communist Party of China.

In Manila, the former foreign secretary, Albert F. del Rosario, who brought the case after years of failed negotiations with China, said the path was now open for a lasting settlement of disputes in the South China Sea.

“The award provides a basis to further talks and cooperation to encompass all parties, including China,” he said.

Land reclamation of Mischief Reef in the Spratly Islands in the South China Sea.

But while the decision is legally binding, there is no mechanism for enforcing it, and China, which refused to participate in the tribunal’s proceedings, reiterated last Tuesday that it would not abide by it.

Speaking at a meeting with European leaders, President Xi Jinping was juvenile and obstinate, dogmatically demanding China’s claim to sovereignty over the South China Sea since concocted “ancient times.”

China’s desk-thumping President Xi Jinping’s Communist Ministry of Foreign Affairs swiftly issued a statement saying the ruling was “null and void and has no binding force”.  Xi accused the Philippines of “bad faith” and accused the tribunal of abusing the UN convention and getting its facts wrong.

“It is an astonishing, emphatic victory for the Philippines,” said Dr Euan Graham, head of international security at the Lowy Institute. “The language is unequivocal, highly critical and damaging to China’s reputation.”

He said it was “huge” that the tribunal had ruled none of the Spratlys generated extended maritime zones. The wholesale dismissal of the nine-dash line was “massive news” for other countries such as Vietnam that are also locked in territorial disputes with China.

Dr Graham said if anything the damning result might leave moderates in China little room to argue against hardliners that they should work within the international system and the UN convention.

Else China has no place in the UN.

By dismissing China’s historic claim to most of the South China Sea, the Hague has given a major shot in the arm to Vietnam, whose extended waters as defined by the UN Convention on the Law of the Sea – the convention The Hague was interpreting – are encroached upon by China’s unilateral “nine dash line”.

China had already shot itself in the foot recently by inexplicably antagonising Indonesia, the big kid within the Association of South East Asian Nations, over its Natuna islands.

For China to lash out in response to The Hague finding now would “be a blatant slap in the face of international law and the mood of most of the international community”, says the Australian National University’s Rory Medcalf.

Unity is vital – not just in ASEAN but through continued firmness from Australia, the US and even Europe, which has too long been muted on this issue.

Rory Medcalf, head of the national security college at the Australian National University, said the finding was “more comprehensively damning than even many of China’s critics had expected”.

He said neither the Philippines nor the US were unlikely to do anything in response to the ruling that could risk military confrontation with the Communist Party of China, but “this could be a first step in more concerted pushback against China”.

While experts have warned the Communist Party of China may respond to the ruling assertively, perhaps by demanding other countries ask permission to fly over the South China Sea, Professor Medcalf said that “if the Chinese leadership is being well-advised it will be looking for ways to try and lower the temperature rather than escalate”.

He said it was striking that the tribunal had been so forthright on the environmental issues.
“There are strong elements of this that go beyond geopolitics and security … to the profound criticism of China’s behaviour in the global commons.”

The crucial question now was how the region responds, Professor Medcalf said. He cast it as a major decision point for the regional grouping the Association of South East Asian Nations, which has previously failed to take a unified stance on China’s behaviour.

“Countries like Australia should now move quickly to encourage solidarity in regional organisations in favour of international law and call upon China to respect the award of the court,” he said.

America and Australia are among the players who have been watching the legal process closely and will have to respond, possibly with concrete action such as so-called “freedom of navigation” patrols close to the territory claimed by China.

Both Professor Medcalf and Dr Graham said they expected a cautious response from Australia, though Professor Medcalf said the Turnbull government should reserve its right to carry out naval patrols close to Chinese-claimed territory and should absolutely continue RAAF flight patrols over the sea.

Australia’s Foreign Minister Julie Bishop issued a statement late last Tuesday night calling on both sides to abide by the ruling, describing it as “final and binding” and “an important test case for how the region can manage disputes peacefully”.

She stressed the finding was not about who owned the rocks and reefs but about “the lawful uses of our oceans” – an implicit rejection of the Communist Party of China‘s stance that the tribunal had no jurisdiction.

The Communist Party of China‘s dismissive response to the ruling against it by The Hague sums up precisely why we should be worried about rules and law and order as China pushes outward.

“Xi Jinping has lost face here, and it will be difficult for China to do nothing,” said Bonnie S. Glaser, a senior adviser for Asia at the Center for Strategic and International Studies in Washington. “I expect a very tough reaction from China, since it has lost on almost every point. There is virtually nothing that it has won.”