The rampaging mobs of Moslem activists are symptomatic of a deep crisis building in Australia’s cities. Yet they have done Australians a perverse favour – opening their eyes to the danger!

The LibLabs have let these alien masses in unconditionally.  The Australian Government required no undertaking by immigrants to respect and comply with Australian values or to renounce foreign values that are decidedly anti-Australian.  The immigration door since Gough Whitlam has been open and unconditional, despite many migrants allowed in from cultures and beliefs wildly different to Australia’s social mores and laws.

LibLab immigration policy has let in hordes from primitive patriarchal societies who suppress women’s rights and freedoms, which condone violence and prescribe barbarism like female circumcision, capital punishment for adultery and blasphemy by stoning and beheading, corporal punishment for theft by chopping off fingers.

In 2010, the Sydney-born Islamic cleric called for the beheading of Dutch anti-Muslim MP Geert Wilders, continues to preach at an Islamic centre in Campbelltown in Sydney’s south-west (‘New Gaza’). 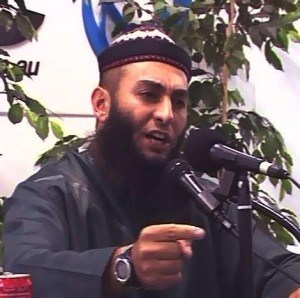 In a speech on his website, Sheikh Feiz Mohammed (pictured) described Geert Wilders, leader of the Dutch Party for Freedom, as “this Satan, this devil, this politician in Holland” and said his head should be chopped off for denigrating Islam.

Feiz Mohammed advocates offering children “as soldiers defending Islam” and encourages martyrdom to children.   Some political and religious figures, including local Islamic leaders, (all for whatever reason), yesterday accused Sheikh Feiz Muhammad of inciting hatred and terrorism through recorded lectures that have been sold in Australia on DVD.

In one of the DVDs, Sheikh Muhammad advocates- “Teach them this: there is nothing more beloved to me than wanting to die as a mujahid (holy warrior),” Sheikh Muhammad says. “Put in their soft, tender hearts the zeal of jihad and a love of martyrdom.”

Not surprisingly, some believe Islamic culture “retarded and violent”.

LibLab immigration policy welcomes in a diversity of cultures including those which outright reject Australia’s Western culture, reject Australia’s predominant Christian religion. Certainly they reject too Australia’s contemporary and liberal democracy which makes the mix volatile.  Many foreigners are welcomed under LibLab immigration policy to our country who fundamentally reject Australian mainstream ways of life, such as having a beer at the pub, women going to the beach in bikinis, men going to the beach in Speedos, women working, women showing their face in public, girls going to school.

LibLab immigration policy goes even further by encouraging its multicultural segregation that rejects assimilation and instead prescribes the right of those having values, beliefs attitudes and ways of life different and contradictory to the majority of Australians to establish recreate their foreign cultures within Australia. Of course, it may be that any ‘assimilation’ would be a disaster for the Australian People, but the ghettoisation of Australian society holds particular dangers.

As a consequence, just like all other European-based countries that have encouraged multiculturalism, Australia has created ethnic enclaves, where foreign cultures can live out their imported ways of life differently to the rest of Australia.  And they come quickly to owe zero loyalty to the host society! Soon after, they grow resentments and hatreds.

One could say that Abbott’s wish is a forlorn hope.  The hatreds are rekindled anew in the multicultural petrie dish.

The naive utopian and indiscriminate theory of multiculturalism is one that prejudices foreign cultures over the prevailing local culture.  Labor’s Racial Discrimination Act of 1975 hands more rights to foreigners than locals.  Foreigners can criticise Australians, but if Australians dare criticise foreigners for not adhering to Australian mores, the racist card is dealt and the Australian is punished by the law.

Alien ghettos continue to be established generally in the capital cities where each ethnic group clings to its own local area.  First rental accommodation is acquired, then houses are bought and then retail businesses.  Shop signage is changed to the language of the new monoculture.  More and more of the monoculture arrive and settle, which overwhelms and intimidates the incumbent Australian population who are compelled to move away, despite sometimes having generations of family established in the area.

The de-culturation of the local people is complete.  The unarmed invasion is complete. The ethnic ghetto is established.

The failed theory of multiculturalism started in Australia back in 1972 under Labor’s Gough Whitlam and has perpetuated under Labor immigration policy ever since. First this policy began by attempting to divide European migrants from native-born Europeans (Australians), but it was always a tool to go to the next step – to create the multiracial society.

Now with the ethnic hordes of anti-Australians, Australia has many apartheid-style ethnic ghettos.

Australia’s First Arab Riot of 2006 at Cronulla was a manifestation of the clash of a suppressed anti-Australian Arab male culture impinging upon ordinary Australian beach-going culture.  Gangs of Arab males in large numbers came to Cronulla and walked across its beaches as the local Australians soaked up the sun.  The Arab gangs came not to engage and integrate, but with bad attitude perving at Aussie girls and looking for trouble with the lads.  And they found trouble and copped it.

Last weekend saw Australia’s Second Arab Riot in Sydney’s Hyde Park, borne out of an extremist jihadi minority having more cultural affiliation with foreign extreme Islamists than with Australia.  Similar to 2006, the ringleaders emanated from a suppressed anti-Australian Arab patriarchal minority of hot heads, again looking to usurp their influence and looking for trouble.  Again they found trouble and copped it. This time fighting Australian police. 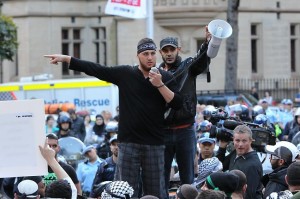 Riots and violent protests are not just criminal acts deserving criminal prosecution, they intimidate and undermine the freedom of ordinary Australians to go about their business and live their lives.  The Moslim Riot last weekend in Sydney’s CBD was civil unrest, such as we are used to seeing it the Middle East.

“This is not Libya. This is not the country where you come to do what we saw yesterday.” 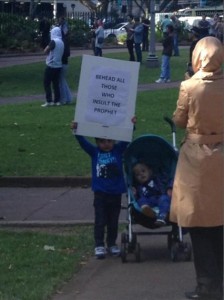 Peaceful protest is decidedly a recurring core of Australian culture.  But both the 2006 and 2012 riots are not the traditional Australian way.  Violent gang riots that attack police and brandish placards calling for beheadings are the actions of foreign Arab extremists that have no place in Australian society.

Both riots are a manifestation of LibLab multiculturalism apologist policy.  Multiculturalism has festered and a foreign alien culture has been nurtured within the foreign ghettos of our capital cities.

Our forebears who fought for Australian values in many wars would be disgusted with the betrayal of Australia’s prized values by successive LibLab governments and the anti-Australian Greens.

What is demanded by the Australian people is not more apologistic mealy-mouthed politicians brushing these issues under the carpet.  Apathetic political inaction followed Cronulla and must not be allowed to happen again.

The Australian people demand the following:

1.    Nationalise and contemporise Australia’s Crimes Act of 1900 – Review the contemporary nature of crimes being committed across Australia as a result of overseas criminal trends reaching our shores – such as rioting, drive-by shootings, home invasions, domestic violence, female circumcision, incitement to violence.  Apply much stricter zero tolerance and custodial penalties for such crimes, abolish plea bargaining, outlaw illegal gang association, introduce custodial sentence for not co-operating with police, and integrate the Crimes Act with the Migration Act – so that all non-Australian born juveniles and adults are auto-deported to country-of-origin if convicted of a serious crime in Australia.  Nationalise the Crimes Act to make criminal legislation consistent Australia-wide.

2.    Nationalise and contemporise Australia’s 1900 Migration Act of 1958 – include an immediate moratorium on immigration and halt immigration from particular cultures, link immigration to resettlement and each State’s carrying capacity, mandate assimilation and integration for any accepted migrants, abolish multiculturalism, mandate immigrant compliance with Australian values and renouncement of anti-Australian values, integrate the Immigration Act with the Crimes Act to facilitate automatic deportation of criminals born overseas.

3.    Australia to withdraw from the Refugee Convention of 1951 – this outdated, open door, one size fits all convention has so many loopholes that it encourages people smuggling, refugee queue jumping and illegal immigration.  It is not fit for purpose.