Moderate Muslims do not exist.  The non Jihadis are either supportive or silent about their nutjob Jihadi cousins.   Inciting terrorism is a crime in Australia, and Muslims are the target persons of interest by authorities.

Suspect Muslim Terrorists in Sydney have been detained under new preventative detention orders after police raids across western Sydney last week in which 15 Muslims were arrested and two charged. 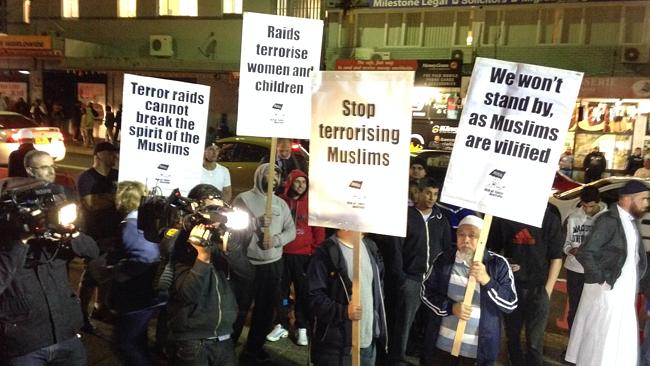 Sydneysiders have been asked to be vigilant.  Australia’s National Terrorism Public Alert Level has been raised to ‘High’.    It is based on advice from security and intelligence agencies, the Australian Government having evidence pointing to the increased likelihood of a terrorist attack in Australia. 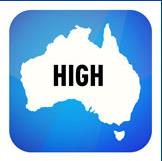 Members of the Australian public can report suspicious activities to the National Security Hotline on 1800 1234 00.

Australia has had a gutful.  It is all thanks to the Labor Party letting them in by the plane and boat loads, handing them welfare and encouraging them to take over Lakemba and Bankstown in south-west Sydney.

In the decade to 2011, foreign Muslims in Australia (mainly settling in Sydney and Melbourne) have grown 70% and most arriving from Lebanon.   Sydney now has 20 major mosques as well as many other minor mosques and Islamic Centres.  Sydney is the Islamic capital of Australia. A total of 208,000 Sydneysiders identified as Muslim at the most recent census. Sydney’s population is 4.7 per cent Muslim — more than double the national average. Their number is forecast to double within a generation.

Australia’s Attorney General George Brandis is set to grant greater powers to ASIO and the Australian Federal Police (AFP) to respond to terrorist threats.  A new Foreign Fighters’ Bill will make it an offence to travel to proscribed parts of the world (like Syria and Iraq) without a valid reason.  Police will be able to arrest anyone looking like a terrorism suspect, such as Muslims acting suspiciously, although they will have to be wary of Muhamed Haneef types.

Sydney has become the prime surveillance area.  Yesterday in Sydney at the perimeter fence surrounding Lucas Heights nuclear reactor, a group of five Muslim men all ragged up were stopped and questioned by police.   A security scare was triggered when suddenly two cars pulled up at the entrance of the Lucas Heights nuclear reactor and five Muslims got out and started snooping around along a bush track.

Caught on CCTV, police swooped on the Muslim group and quizzed the men about their movements, taking down particulars from each of them and checking their identifications. 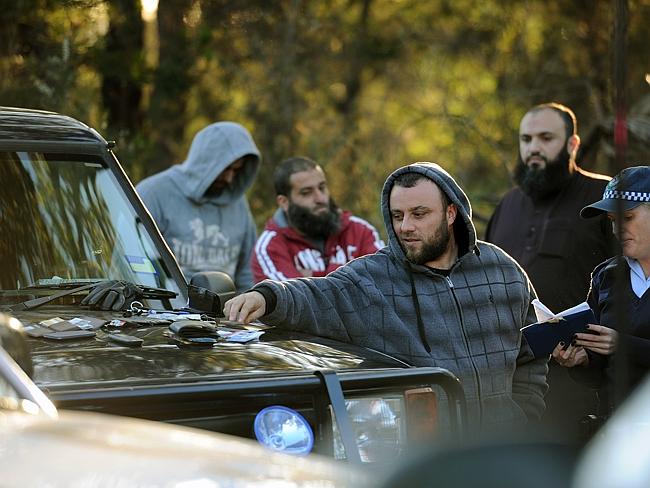 After the Muslims were released, a news helicopter crew captured footage of the same  Muslim men in robes praying on mats still near the nuclear facility.

Australia’s only nuclear reactor at Lucas Heights is situated about 30km from the Sydney CBD on the outskirts of Sydney’s ethnic south-west.  It is owed by the Australian Government and operated by the Australian Nuclear Science and Technology Organisation for radioisotope production mainly for medical applications.

But it has become a preferred target by nutjob Muslim Terrorist in recent years.  In 2003, Willie Brigitte, a French Muslim launched a terror plot.   In 2005, Muslim Terrorist Mohamed Elomar (infamous severed heads man) was arrested over the foiled Pendennis bomb plot to blow up the nuclear reactor.  He’s been let loose and is fighting with ISIL terrorists in Syria.

Sydneysiders have been asked to report suspicious behaviour.  Small pieces of information from members of the public can help keep Australia safe from terrorism. Police and security agencies are working hard but Australians can help them complete the picture.

Watch for suspicious vehicles near significant buildings or in busy public places, and oddly dressed groups in balaclavas or similar. 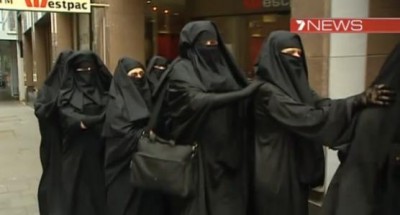 If you see a suspicious person in a public place, with no apparent reason for it being there, here’s what to do:

The way terrorists use, rent and buy accommodation is often suspicious – such as dodgy Muslim bookshops set up as a front for terror plotting.

Meanwhile, Brandis has signalled the Australian Government may widen the scope of control orders to make it easier for police and intelligence agencies to ban people from
being in certain areas or speaking with certain people if they are suspected of engaging in terrorist activities but there is not enough evidence to charge them.

New preventative detention orders will allow police to hold suspects without charge for a fortnight and George Brandis said that while no application had been made for control orders on any of the people detained in the raids, he is open to expanding them.

Another Internet video by ISIL’s Grand Wizard Abu Mohammed al-Adnani calls on Muslims to kill crusaders and disbelievers and the citizens of the countries that entered into a coalition against the Islamic State, “then rely upon Allah, and kill him in any manner or way however it may be.”

Various techniques are suggested in the video.

Unbelievable.  It comes just days after police smashed an alleged plot in Sydney to kill random Australians on camera and also as world leaders prepare to meet at the United Nations in New York to discuss how to combat the problem of Jihadists travelling to Iraq and Syria.