Malcolm Turnbull at Australia’s Middle East Operations base at Al Minhad in the UAE on ANZAC Day.   Turnbull has defiled ANZAC Day by promising to commit Australian troops for the “long term” in the Middle East, ostensibly to assist in the fight against terrorism. And who created al Qaeda in Afghanistan, the father of the Taliban? Might it have been the CIA and MI-6?

Have we forgotten that John Howard joined Australia to the ‘Coalition of the Willing’ in Iraq to take the ‘weapons of mass destruction’ off Saddam Hussein? What did Iraq become and was not ISIS the last creation of that drama?

Then we saw official-Australia become part of dirty war in which Western powers aided and abetted terrorism in Syria for the single purpose of bringing down the secular government of President Assad. What came out of that? The growth of ISIS? Millions of refugees?

No lie has been to small for our politicians to get our country into this mess And to abuse the legacy of ANZAC by associating it with commitments to ‘fight terror’ when we have helped create it – is perverse.

If we are not on the right side of fighting terrorism in the Middle East, it is just time to leave. Understanding who created this cauldron is the start of getting out. Was it not our so-called ‘allies’.

If we look long and hard it might be fitting to see who is really fighting terrorism today. Could it be Russia? Might it not be better to let Russia do that in Syria?

ANZAC Day is not a day for politicians to make war commitments. It is a Day of reflection and celebration of identity. The great national lesson of ANZAC is to realize the truth – it is time to mind Australia’s business and put our interest first. If doing something about terrorism is a part of that national interest it would be far better we just get out of the way of those who are truly doing it!

It was far more appropriate on ANZAC Day that Labor’s Bill Shorten with Governor-General Sir Peter Cosgrove were at Bomana War Cemetery in Papua New Guinea paying tribute to those who served defending Australia during World War II.

“Many would fall here in the jungle, away from the wide brown land they loved, but were destined never to see again. There were heroes among them.  At a time when Singapore had fallen, and northern Australia was being bombed, the fighting here was crucial to halt the Japanese advance.” 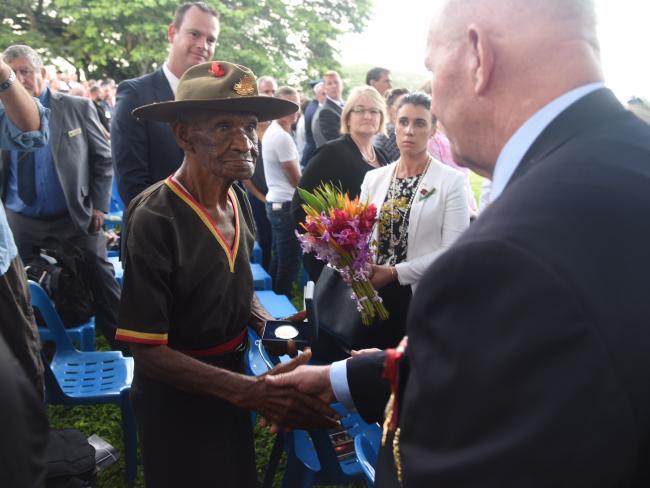 “Each year, more and more Australians are coming to recognise the battles of the PNG campaign — from Milne Bay and Wau to Kokoda — as decisive moments in our nation’s history. In PNG, inexperienced and out-numbered Australians turned the tide against invasion. Ordinary people defended their homeland with acts of extraordinary courage. Spending ANZAC Day in Papua New Guinea also reminds us of the gratitude Australians owe the locals, so many of whom risked their own lives as guides and stretcher-bearers.”

“Today we do not glorify war but we glorify the human spirit and the Australian values that the men and women who have defended us represent.  We also pay tribute to those members of the Australian Defence Force currently on active service overseas, including in Afghanistan and the Middle East.”