Head of Australia’s intelligence service, ASIO, Major-General Lewis has said it is “very clear” that Islamic State had already “tapped into” and radicalised young Australians.

“That’s been well documented.  We have had three attacks involving fatalities and six thwarted attacks in the last 12 months. In perspective, two-thirds of the attacks or planned attacks on Australia have occurred in the last 15 years.”

Yet, just over a year into the job, suddenly as ASIO Director General Duncan Lewis, has been summoned into Coup d’État Malcolm Turnbull’s usurped Office of PM.  Lewis has been ordered, as if under communist dictatorship and propaganda, to go soft on a known, internalised Islamic enemy, that hates Australians and everything we stand for.  We are to bend over, convert to Islam and to ask us loyal Australians to somehow friggin ‘hug a muzzie’.

In noble days of loyal soldiers this would amount to treason.  It still does.

Since when did absolute solemn life-sacrifice surrender to an elitist politician who has democratically usurped power?

Next, Duncan Lewis could do a David Morrison and order proud serving Australians to report for war to a hormone-supplement dependent LDGTBIPAGFGQA+ colonel to engage against hardcore intolerant jihadis!

Who signed up to defend Australia and get fucked?

Such a command has betrayed the honour and the Corps irrevocably. 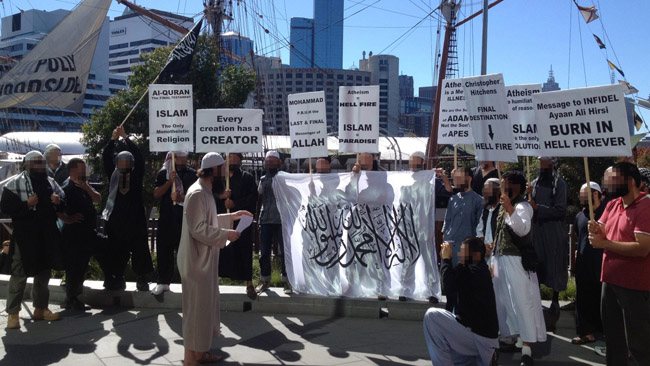 Lewis has phoned Coalition poli­ticians to urge them to use the soothing language favoured by Malcolm Turnbull in their public discussion of Islam.  He has told MPs that their more robust comments “risk becoming a danger to national security.”

Come again?  Who’s a danger to Australia’s national security?  We’ve just had the anniversary of the Islamic terror attack in Martin Place, which ASIO was found wanting. 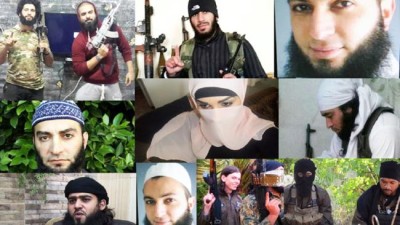 Australia’s Security Intelligence Organisation is effectively a branch of our military – a strategically critical one on which the rest of the military depends.  It is not a government department.  It is not part of party politics.  It is appropriate to be run by a senior soldier, not by a politician.

Yet Lewis has signed up, not to protect Australia, but to dispense Turnbull leftist politics.  Turnbull is an ideological lefty in denial about the threat of Islam.  It seems Lewis now has a Lefty propaganda brief to appease the growing number of Muslims arriving in Australia.   PM Malcolm Turnbull has ordered Lewis to lean on politicians critical of Islam and Islamic terror, with threats to haul dissenters into ASIO’s dungeon below 70 Constitution Avenue for stronger persuasion methods.

So Lewis is playing Turnbull politics rather than performing his solemn duty of protecting Australians from the wholly imported Islamic terror threat.

It seems that Lewis was a political appointment anyway.  As head of intelligence, the Director General of ASIO reports directly to the Attorney General.  But instead, Lewis was hand picked by the Liberal Party’s Foreign Minister Julie Bishop in May 2014.  She has form in backstabbing an elected prime minister.

Lewis is a simple man who can’t grasp complexities and who hasn’t the depth of wisdom required to deal with a threatening ideology like Islam. So like a soldier he does as he’s told, and Malcolm has told him to warn critical politicians to only say nice things about Islam.

What a ‘Peace-in-Our-Time’ idiot!  But then Duncan earned his promotions mainly from peacekeeping roles.  Having served in the 1982 Lebanese War, he probably has Leb mates.

Islamic ideology and values are incompatible with Australian Christian Western values.  PM Malcolm Turnbull insists Australians be tolerant, that we have “a patriotic duty to preserve the fundamental Australian value of mutual respect.”

Since when did Muslims respect us Australians their hosts and our way of life, they came here to benefit from? 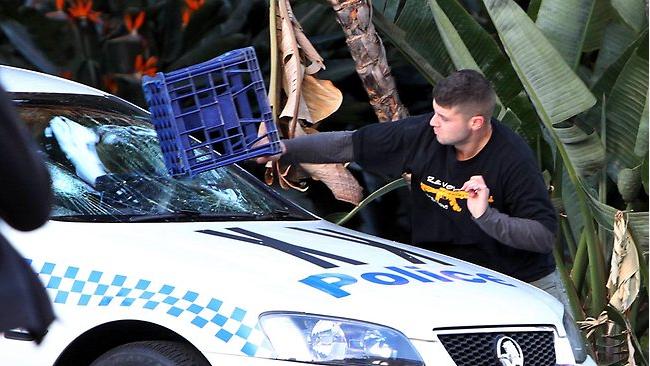 Muslims arrive and stay with their own imports shunning Australia’s way of life.  They follow sexist barbaric practices such as Female Genital Mutilation, they want their children to not attend Australian schools but imported Islamic ones, to enforce Sharia Law, mandate women hide their bodies in public, to only eat halal food, and to harbour extreme jihadism in their youth.

Yet ASIO has been found napping when in February this year, a convicted terrorist and a suspected war criminal, boarded a flight from Sydney airport to Syria using his brother’s passport.   Arab ethnic Khaled Sharrouf in 2008 had been convicted of terrorism in Sydney, pleading guilty for being one of eight Arabs plotting to attack the Lucas Heights nuclear reactor in Sydney’s south.  He only served one year in gaol. 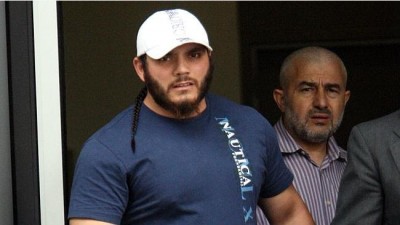 Yet on December 6, 2013 Khaled Sharrouf (then 31) despite being under 24-hour ASIO surveillance as part of a counter-terror investigation, despite being on ASIO’s airport watchlists around the country, and having no passport in his name, walked through border security at Sydney International Airport and boarded a Kuala Lumpur flight and since rocked up fighting with ISIS in Syria.

ASIO then hushed up the embarrassment.  Worse, Sharrouf, continued to receive a taxpayer-funded disability support pension cheque of $766 a fortnight, months after arriving on the battlefields of Syria.  So welfare paid for his flight and mercenary fitout.

Then ASIO allowed his family to join him in the caliphate.  No worries.

Previously in 2011, Sharrouf had violently attacked a man at a restaurant carpark in Sydney.  He associated with a former Comanchero bikie, and in 2013 his business partner Vasko Boskovski is murdered outside his home at Earlwood.  In November Sharrouf was caught unlicensed by police firing a gun on a hunting trip west of Sydney and practicing with AK47s in bushland outside Rylstone.

In 2009, Islamic extremist Wissam Mahmoud Fattal was convicted over a planned attack on Sydney’s Holsworthy Army Base.

We are under attack Major-General Duncan Lewis on Australia’s own soil!  Australian police, our military and ordinary civilians. 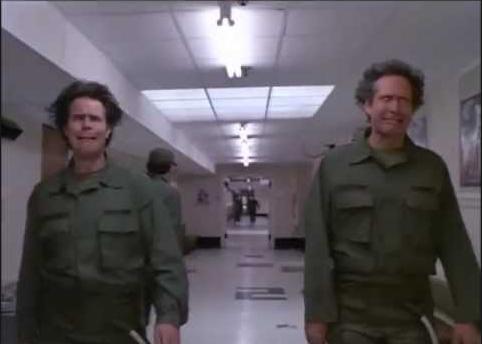 Islam is an evil barbaric cult that has no place in civilised Australia.   ‘Moderate Islam’ is a constructed myth by the Left.  there is no such animal; only silent complicit Islam when their jihadis go rabid.

The Arab Islamic Grand Mufti in Australia, ­Ibrahim Abu Mohammed, after the Islamic terror attacks in Paris blamed The West’s “racism, Islamophobia, foreign policies and military intervention in the Middle East.”  After the Islamic terror attack in at police headquarters in Parramatta, the Grand Mufti refused to label the fatal shooting a terrorist attack, instead blaming social media for teaching young Muslims extremist views. 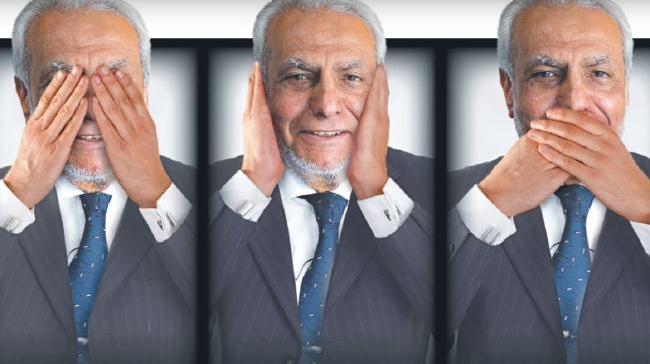 It has been revealed that this Grand Mufti had rubbed shoulders with Lindt siege terrorist Man Monis during a visit to the Villawood detention centre, along with the leader of radical ­pro-ISIS Islamic group Hizb ut-Tahrir.

He has publicly supported exiled Egyptian sheik Yusuf al-Qaradawi who has urged the world’s Muslims to fight in Syria, the Australian reports today.  Yusuf al-Qaradawi is regarded as the spiritual head of Egypt’s banned Muslim Brotherhood.  The Mufti and his Australian National Imams Council are also listed on a petition calling on Interpol to remove Qaradawi from its wanted list.

This mufti has sanctioned suicide attacks on Israeli civilians as “heroic martyrdom operations”, described the Holocaust as “divine punishment” of Jews and has appeared to justify the killing of apostates. He was denounced as a “theologian of terror” in a statement against the use of religion to incite violence signed by 2500 Muslim intellectuals from 23 countries in 2004.

Last month, he released details of a book he wrote saying non-Muslims wanted their women to walk around “exposed as a piece of sweet pastry … ­devoured by the eyes of men”.

­Ibrahim Abu Mohammed shpoudl be replaced as Grand Mufti by the chairman of the Parramatta Mosque, Neil El-Kadomi, who told Muslims after the Islamic terror attack in Parramatta, that they should not “abuse the privilege of being Australian” and “if you don’t like Australia, leave”.

Know your enemy, Major-General Lewis.  The enemy of Australia and of our way of life is within.  It has breached our nation’s borders.  Muslims are anti-Australian in every respect. It is not possible to be a so-called hybrid ‘Australian Muslim’.  It is a constructed term like Islamophobia, just like ‘bogyphobia’ and ‘pogonophobia’. ‘Australian Muslim’ is just as a ridiculous oxymoron just like being a Christian Muslim.

Lewis should read up on his enemy’s ideological mantra in order to better understand what ASIO faces.  Read up on the Islamization of The West.

“His phi­los­o­phy is set forth in Mein Kampf which is, at the best, a good war-cry by which a beaten nation could recover its strength from som­no­lent vic­tors. No liberal-minded man dis­putes about another’s reli­gion. We have all adopted nowa­days the maxim of Fred­er­ick the Great: ‘Every­one must get to Heaven in his own way.’ But speak­ing with proper rev­er­ence, one haz­ards the opin­ion that the Gospel of Christ will still be preached among men, and espe­cially in Ger­many, long after the resus­ci­tated wor­ship of Thor and Odin, of Pagan­ism and race ascen­dancy has died out. Napoleon did not seek to start a new reli­gion, whether founded on race or revelation.”

What is happening to free speech in democratic Australia?

Dennis Jensen, the Liberal member for Tangney, has come out hard against Duncan Lewis stepping into partisan politics:

“I understand what he (Mr Lewis) is saying on it, but I fundamentally don’t agree. I understand the majority of tips ASIO gets come from the Muslim community.  “But to say something is off limits and should not be discussed is extremely anti-democratic. It’s really a slippery slope. Free speech was not won easily. People paid for it with blood. To meekly roll over and give it away is very mistaken.”

At the same time, Duncan Lewis as chief of ASIO has told the Australian people that his intelligence and security authorities can offer ‘no guarantees’ there is no possibility of another terror attack in Australia. 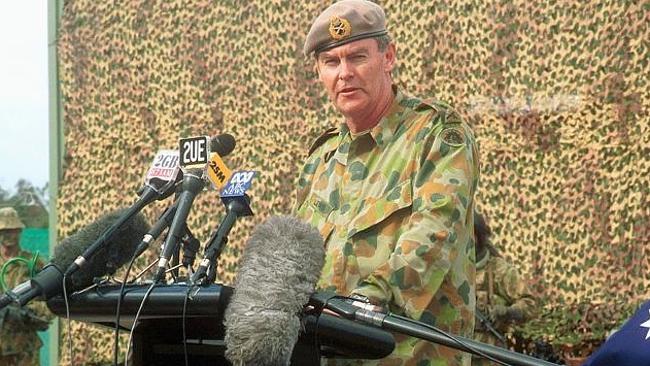 At the same time, Lewis has publicly stated that the greatest threat to Australia and Australian interests is from terrorism undertaken by Islamist extremists, and the evolution of those involved in this, which remains currently of most concern for ASIO.

At the same time, Lewis has confirmed that ASIO and the Australian Federal Police continue to monitor more than 400 “high priority” cases involving Islamics on Australian soil, which he described as a “challenge”, but that “you work as hard as you can” to prevent further terror attacks.

At the same time, Lewis has also confirmed that Australia’s national terrorism public alert system should remain at the “high” level, which means an attack is considered likely. It was moved to that level on September 12, 2014 – when he took over from David Irvine as director general. 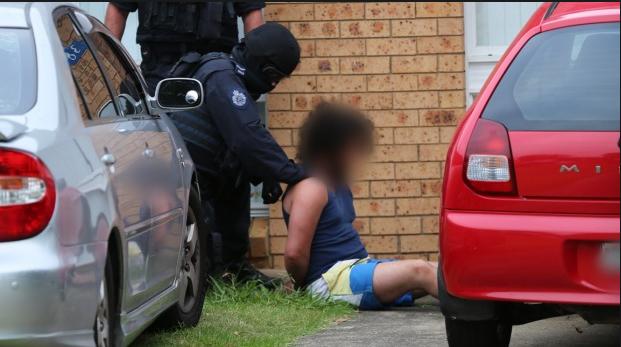 Yet, at the same time, Labor-Lite Turnbull is in Lewis’ ear:

Lewis has reassured Australians concerned about the additional 12,000 Syrian refugees who will come to Australia in the coming days and months, starting with a family from Homs in Syria this week, as part of the broader humanitarian response.

Lewis has signed up to Multiculturalism, which automatically means that he puts Australian culture and our way of life second place to other cultures.

National cohesion is for foreigners to assimilate with Australians, not the other way around.

Lewis needs to sign up to Team Australia or resign as unfit for command.

“I never ‘worry’ about action, but only about inaction.”