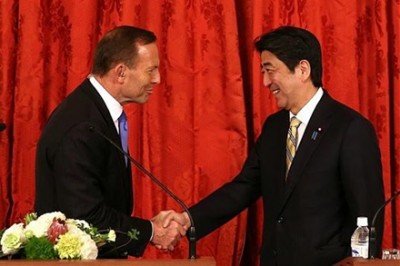 Abe has also been invited to lay a wreath at the Australian War Memorial, but he will not be publicly nor officially apologising to the people of Australia for Japan’s war upon Australia during World War II.

Arrogant Abe will not be apologising for Japan’s war atrocities inflicted upon Australians, for our 8274 killed in action, for our 1246 who died of wounds, for our 5336 who died of sickness or injury while prisoners of war to Japan, for another 2645 presumed to have died while POWs, or for the 13,000 Australians that Japan forced on the Sandakan death marches and into slave labor on building its Thai-Burma Railway.

In 1942, when hospital ship HMS Vyner Brooke was attacked by the Japs, the surviving Australian nurses on a beach near Muntok on Banka Island were subsequently lined up and shot by the Japs – those lying wounded were bayoneted to death.  Arrogant Abe will not be apologising. 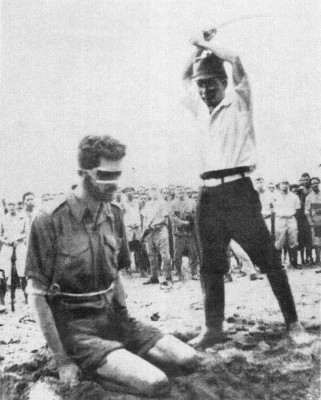 Australian Commando Sergeant Leonard G. Siffleet (27) of Gunnedah was beheaded by Japanese officer Yasuno Chikao on the orders of Vice-Admiral Michiaki Kamada of the Imperial Japanese Navy.
Aitape Beach, New Guinea on the afternoon of October 24, 1943.
Lest We Forget

In fact, Abe is in denial about Japan’s state record of aggression, invasion, mass murder, mass rape and evil barbarism.  He refuses to acknowledge the word “aggression” used in the context of Japan’s wartime actions, just two generations ago.

Abe has arrogantly only acknowledged that “Japan caused great damage and suffering to the people of many nations.”   Abe’s attitude is that of an enemy combatant and if Australia has any respect for its war dead and living, he should not be permitted anywhere near the Australian War Memorial.

Abe should be visiting Darwin and Sydney, where suitable monuments be erected to remind Australians of Japan’s invasion threat just two generations ago.

Abe is though happy to acknowledge his ancestral link to Japan’s former prime minister, Nobusuke Kishi, Abe’s maternal grandfather.   Kishi was a senior government official under Imperial Japan before and during World War II, and was prime minister of Japan from 1957 to 1960.  Kishi did not apologise for Japan’s wartime aggression, but in fact liberated several war criminals and regarded seven executed after the Tokyo trial as “the seven patriots who died for their country.”

Far from being a ‘free trade’ agreement as propagated by the LibLab media, Abbott’s trade mission to Japan on April 7, 2014, was nothing but a political begging mission.

Since Whitlam, Australian industry’s tariffs protecting Australian jobs and living standards have been whittled away by successive LibLab trade liberalisation by Fraser, Hawke, Keating, Howard and Rudd.  So when Abbott arrived in Tokyo, he only had Aussie beef to barter with and the deal Abbott struck was a Japanese skewed one, and drafted by Kevin Rudd anyway.

The Liberals have otherwise kept the trade deal secret from the Australia people, because it is an embarrassment.   Continued calls for Abbott to reveal the full text of the free trade deal have been ignored.

There is nothing historic today about the trade agreement with Japan, and the media spin that it is somehow a ‘free-trade’ agreement perhaps can only cynically refer to the fact that Japan is getting something for nothing out of Australia.

All Australia gets is more beef exports to Japan, but it is a slow incremental benefit.  Japan’s nearly 40 per cent import tariff will halve over 15 years, so don’t hold your breath.  Dairy, sugar, grains, wine and canned food produce will only see marginal tariff reductions by Japan.

Abbott’s Economic Partnership agreement sees Australia promise Japan the removal of the last $1500 tariff on Japanese cars, mass dumping of Japanese car parts and electrical goods on to Australia’s retail market.   It will be the final nail in the coffin to Australia’s automotive parts industry, after the announced closure of Australia’s last car makers Holden, Ford and Toyota.

Abbott has ignored the Australian Dairy Industry.  Fresh cheese exports to Japan will still have Japanese tariffs remaining at 29.8 per cent.    Some negotiator, Abbott just flew to Japan to say “yes” to whatever Abe wanted.  Under the terms of the agreement, the Australian dairy industry will save just $4.7 million out of a total export market of $511 million, or 1%.

So it is all political hype with little tangible gain for Australian industries.  Once again the Liberal Party treats Australian farmers as mugs and second cousin Nationals are just told to wear it.  Barnaby Joyce is all hot desert wind.

While in Australia, Abe is expected to sign an agreement with Abbott for Australia to buy Japanese submarines for Australia’s Navy, and in so doing mothballing Australia’s Submarine Corporation and Australia’s submarine industry at Port Adelaide along with Aussie skills and know-how.

Part of Abbott’s secrecy was him sending Australia’s head of Defence procurement, Warren King, on a top-secret mission to Japan in February 2014 to open negotiations with Japan’s defence agency to buy Japan’s Soryu Class submarines off the shelf.

This is what Abbott can do with Japanese submarines: 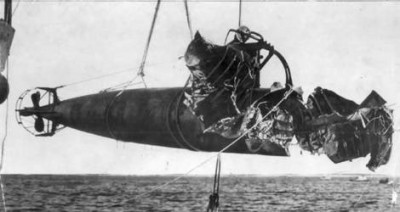 “For ourselves, we shall not trouble you with specious pretenses—either of how we have a right to our empire because we overthrew the Mede, or are now attacking you because of wrong that you have done us—and make a long speech which would not be believed; and in return we hope that you, instead of thinking to influence us by saying that you did not join the Spartans, although their colonists, or that you have done us no wrong, will aim at what is feasible, holding in view the real sentiments of us both; since you know as well as we do that right, as the world goes, is only in question between equals in power, while the strong do what they can and the weak suffer what they must”.