So this week, sadly, has heralded the beginning of the end of Qantas, Australia’s iconic Flying Kangaroo.

Qantas boss, Alan Joyce, on July 8, 2014 this week announced the mass sackings of Australian world-class engineers and back office staff from Qantas operations in Sydney, Adelaide and Melbourne. 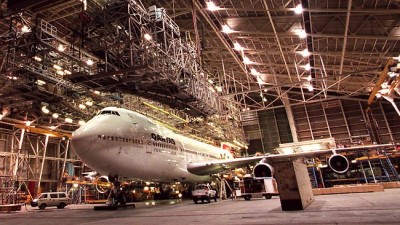 Joyce, the imported tricky leprechaun from low-cost Air Fungus airways in Ireland has announced his axing of 167 Australian aeronautical engineering careers at Qantas.   Some 6000 Qantas engineering employees and 350 apprentices are at risk.

It is quite clearly a knife into the very heart of Qantas’ airline safety, as much as Joyce would otherwise like to fool himself and hundreds of thousands of Qantas’ loyal and frequent flier passengers.

Joyce’s mass sackings of Qantas engineers extends to some 5000 jobs across Australia’s national carrier, or 15% of Qantas entire workforce of about 33,000 employees.  Joyce announced his decision in February 2014 to save $2 billion over three years.  He pockets $5 million year plus a profit share, so staff sackings just earn him more pocket money.

Joyce treats Qantas like low-cost Jetstar.  Joyce only knows the strategy of low-cost competitiveness. Low fares and mass sackings are part of that narrow thinking.  Joyce would be better off running K-Mart or Big-W where everything is imported cheap from China and sold at budget prices.

“Our members will not jeopardise safety and allow that to happen, so more than likely we are going to see in the future there is going to be quite a few delays on Qantas aircrafts,” he told reporters in Melbourne on Tuesday.

Mr Purvinas said the job prospects of the sacked engineers were not promising.   “Unfortunately our engineers are so highly qualified in their field they wouldn’t be able to secure any employment in any other industry,” he said.

Joyce doesn’t care.  He’s not Australian.  He has no passion for Qantas, just for his own golden parachute, if cancer doesn’t relieve us of him sooner. 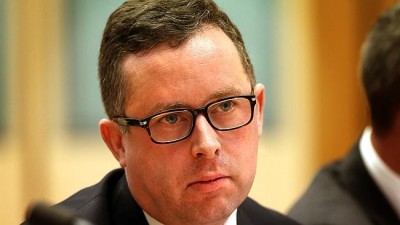 In Australia’s 2011 Parliamentary Senate inquiry into Qantas, Joyce showed no compunction from his rash decision to shut down Qantas for three days world-wide.  This was Joyce’s way of mishandling the quite lawful industrial action by Qantas pilots, licensed engineers and ground staff to his threats of offshoring.

The impotent Qantas Board just went along with him.   Cancer, grow you bastard!

Joyce claims new aircraft and technology means less maintenance required.  But numerous Qantas aircraft sent for maintenance in Asia have been found with corrosion on the wings, multiple cracks, faulty engine indicators and, in the case of a 747 jumbo, three of four engines not held on properly, the aircraft engineers’ union has alleged in a dossier detailing a litany of errors. 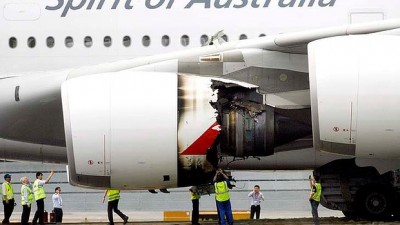 Mr Purvinas has cited no fewer than 600 defects on the first Qantas 737 to have work conducted on it in Singapore in late 2009.

The wrongly attached engines of a Qantas 747 jumbo aircraft was done in Hong Kong, while heavy maintenance in Kuala Lumpur in 2008 resulted in 95 errors on a Qantas 737 such as extensive corrosion on fuselage doors and wings and rusty flight control cables.

The alleged defects included several cases of corrosion on the wings, a cracked floor-beam, damaged wiring and numerous wiring clamps loose or damaged.  The defects were found by Qantas engineers sent to Singapore to look over the plane after locals had carried out their own inspections, the union says.

Mr Purvinas said the Australian travelling public was put at risk by Qantas management’s decision to offshore more work – a claim rejected by the airline. Qantas accused the union of again playing the ”safety card” by compiling a list of maintenance issues dating back 16 years.

Purvinas also alleged in his submission to yet another Australian Senate inquiry in March 2014 into Qantas, that a Qantas 747 jumbo that had heavy maintenance in Hong Kong in 2008 was later found to have three of its four engines ”not held on properly”.   ”If any one of these engines had fallen off during flight, a most likely outcome would have been the loss of the aircraft,” Mr Purvinas said.

The union has also claimed that at least 95 errors were found on a Qantas 737 which in 2008 had heavy maintenance in the Malaysian capital Kuala Lumpur. These included ”extensive corrosion on the fuselage, doors and wings” and rusty flight control cables.

The union has recently claimed that there are so many errors on Qantas jets that are sent to Asia for heavy maintenance over the years, risking passenger lives.

Qantas plans to consolidate its Australian heavy engineering bases – two in Victoria (at Tullamarine, employing 400; and at Avalon, employing 700, including contractors), and the other 400 at Brisbane airport – into one or two bases, with a decision to be made next month. 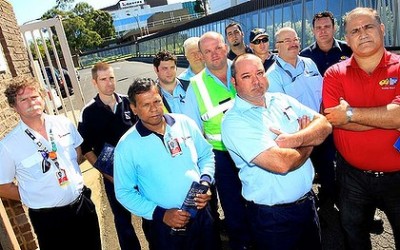 Qantas cost-cutting is an inevitable consequence of its privatisation by the Hawke-Keating Labor government’s sell off to foreign hands in March 1993, pocketing over $2 billion for the Labor Party’s coffers.   Successive Liberal and Labor politicians in Australia have been enraptured in reaping the cash spoils of free market liberalism out of pubic assets like Qantas and the Commonwealth Bank that were not theirs to sell.   Since 1993, under a corporatised Qantas, profit and shareholder return overrule taxpayer values of Regular Public Transport being reliable and safe.  Anyone can be the CEO, even foreigners.

Joyce’s cost cutting of Qantas is just following the global corrosion afflicting first world airlines like Lufthansa, Air Canada and American Airlines.  Air France and KLM have had to merge.  Japan Airlines plans to axe 21,000 staff, or about 30% of its workforce.

Airline cost cutting is a consequence of global deregulation and dumbing down of international airline industry led by a naive low-cost carrier strategy of International Civil Aviation Organisation to make flying cheaper and to expand the aviation industry.   Australia’s Civil Aviation Safety Authority has been all to happy to oblige.

Sophisticated, high-tech, multimillion dollar passenger jet aircraft are being treated like a bus fleet and airlines as bus services so they may be affordable to the Third World masses.

But once a Qantas crashes, it will be the end of Qantas’s reputation and will lead to the ultimate demise of the airline, probably swallowed up by foreign competitor like Etihad or Singapore Airlines. 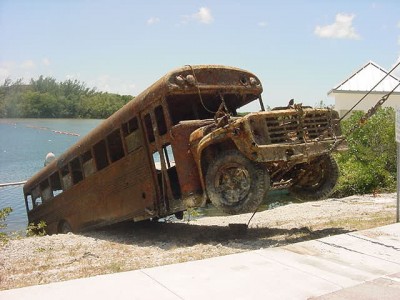