‘Anti Racism’ is NOT the opposite of what we might imagine are foolish or negative attitudes and conduct by a few Australians towards people of different races.

Anti Racists invade media, political groups and educational institutions.  They will act violently to shut up people they call “racists” and they set out to establish a globalised society. 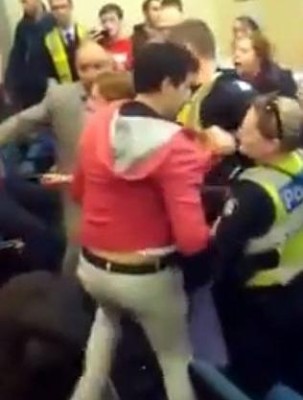 But where did it all come from, how does it work and why should we resist it this age of economic globalism and Chinese superpower imperialism?

The sort of threat of violence from Antifa anarchists that Australian nationals have to put up with in Seat of Lindsay (Saturday May 24, 2014 – the morbidly obese fat chick can’t fit into ANTIFA’s red and black uniform let alone jump).

Speakers:  Dr. Jim Saleam, President of Australia First Party, will chair for a number of speakers who will unravel the ‘anti racist psychosis’.