Australian Competition and Consumer Commission’s current Chairman Rod Sims is statutorily required to respect the public trust of all Australians and to uphold his assigned duties objectively and independently.

The ACCC Chair and its commissioners are not public-bar-liberated to evangelise their own political agenda in the public domain like suggesting the sale of Australia’s national assets.

So why has this closet politican suddenly come out declaring to our Prime Minister:

“There is no doubt in my mind that energy prices, particularly in NSW and Queensland, would now be lower had the private sector owned those network business rather than them staying in the public sector,” he said.  “I don’t think there is any doubt about that.” ? 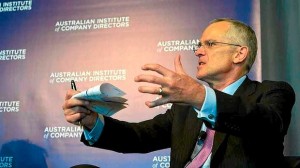 What is Sim’s motive or his political agenda?  Dangerous elites like the euphemistically named Institute of Public Affairs are behind the lobbying.

Rodd Sims can’t even control the Wesfarmers-Woolworths cartel and abuse of market power or the collusive fuel pricing ripping off Australian motorists and our national transport industry.   Before the ACCC, Sims was Chairman of the Independent Pricing and Regulatory Tribunal of New South Wales which year on year agreed to utility price hikes.

The bloke is useless.

Rod Sims bleats on that privatisation is good for productivity.  Crap.  Every time politicians flog off public infrastructure, the price of service to consumers goes up.  Look at all the freeways sold off to private tollways!  Look at energy prices!

Just like Free Trade is better for consumers because cheap imports kill off local business.  Consumers may be able to afford the cheap imports, but won’t have jobs to pay for them.

For ACCC’s Rod Sims to personally propagate privatising Australia’s national public assets is not only outside his official role as an Australian Public Servant but and act of treason.

The man’s outburst is clearly self-servingly and compromised by his own political agenda. He is unworthy of the honour of his high entrusted public office.

Sims in his brainsnap privatisation evangelism has abused his office. He has lost all credibility with the Australian public.  The man has in what he has done revealed himself not as an independent and trusted public servant but as a politicial with a political agenda that risks usurping Australian public wealth over our taxed generations.

Rod Sims deserves to be immediately dismissed from his entrusted public servant post at the ACCC and a full integrity investigation undertake by a Senate Enquiry.