In 2006, Liberals Downer and Howard signed a major petroleum gas drilling deal with Australia’s neighbour East Timor, after already having committing billions and sending in our diggers to liberate the nation from Indonesian imperialism.

Greater Sunrise submarine gas fields are situated 150 km south-east of Timor-Leste and 450 km north-west of Darwin.  They promise 5.1 trillion cubic feet of natural gas and 226 million barrels of petroleum gas condensate, collectively worth an estimated $40 billion. Woodside Petroleum, has long had a leasehold and is uber keen to exploit the field.  Woodside has for years been working hand in glove with the Australian government and senior ministers to score the best possible deal.

The Libs signed a 50/50 revenue treaty over the Greater Sunrise fields with East Timor in 2006,  the Treaty on Certain Maritime Arrangements in the Timor Sea (CMATS).

Howard and Downer have both long since retired from politics, but Downer the self-styled Adelaide aristocrat, went to work for the corporate with most to gain from the exploration deal, Woodside Petroleum.  Why?

During the bilateral negotiations in the two years leading up to the treaty signing, East Timor has since learned that Australian official government spies, ASIS, on orders of Australia’s then foreign minister Alexander Downer, had bugged the East Timorese government cabinet office during delicate oil-and-gas negotiations in Dili in 2004.

Under the guise of being Australian aid workers, a team of ASIS operatives inserted listening devices into the walls of key East Timorese government cabinet office to eavesdrop on the treaty discussions.  Australia’s current director general of ASIO, David Irvine, was head of ASIS when the alleged bugging operation against East Timor took place.

Liberal corporate mates deals once again.  This is an abuse of trust and a gross misuse of Australian intelligence is undermining all the goodwill earned by Australia’s peacekeeping INTERFET leadership from 1999 to 2003.  Australia’s operation cost taxpayers over $4 billion, two Australians lost their lives and a number of other Australians were wounded in action.  Australian forces abandoned East Timor prematurely in 2005 only to return in 2006 to properly help transition the flegling nation to civil government. 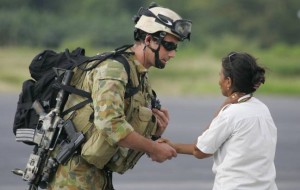 East Timor is seeking to have the 2006 treaty overturned and the $40 billion oil and gas treaty it signed with Australia ripped up. The hearing is due to start tomorrow.

Liberal pollies with mates in big corporates think they can despatch ASIS and ASIO to do their dirty work.   Problem is that ASIS and ASIO are pollie lapdogs in their massive ivory tower.  Typical Canberra.

So who is to benefit from undermining East Timor’s claim at The Hague?  Not Australia’s national security or strategic defence interests, nor its trust and relations with our immediate neighbouring friendly nations.

Woodside Petroleum will benefit most and the Liberals from receiving massive royalties at the expense and treachery against East Timor – our close but desperately impoverished neighbouring nation.