Waves of sexual attacks on European women by so-called ‘asylum seekers’ are being reported all over the EEC.
The German cases have been particularly severe, so much so, that even ‘feminists’, usually associated with the Left, have been forced to protest.
Now the Finnish police say these attacks are organized.

On the night of December 31 into January 1, men in a crowd of about 1,000 assaulted mostly female victims near Cologne’s central train station (Köln Hauptbahnhof).

Eye-witnesses say the women were groped, insulted and became subject to robbery as well. Many of the aggressors were described as being of North-African or Arabic origin. Not one suspect is a German national.

More than 500 victims filed complaints with the police so far.  These attacks are racist attacks that might be likened to ethnic cleansing. 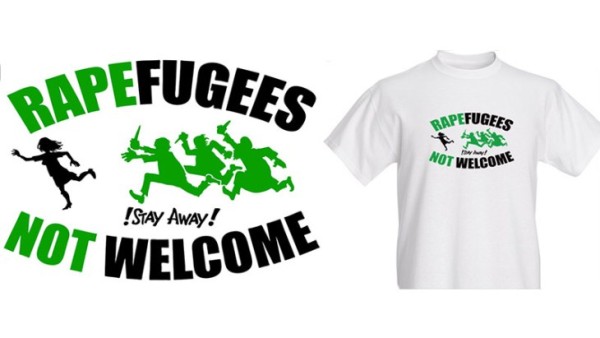 Cologne is the largest city in Germany’s state of North Rhine-Westphalia. It’s interior minister responsible for policing, Ralf Jäger, has confirmed that nineteen suspects were migrants – 10 of them asylum applicants, 9 illegals.  Most are Moroccan.  Jäger has laid the blame with the federal police, responsible for protecting national railway stations like Köln Hauptbahnhof.

It’s all political trading of blame and finger-pointing.

Jäger is quiet about justice has said that he didn’t want to give false hope to victims by promising quick identification and convictions of perpetrators.  Jäger is accused of a multicultist cover up to appease the political Left of Angela Merkel and her open-door policy for 1.1 million Arab welfare seekers invading Germany in just 2015 alone.

This is Merkel’s Migrant Crisis that she has ideologically inflicted upon the good citizens of Germany and European.  They should all go and camp at her place.  Her excuse that accepting them is dictated in the German Constitution is her communist con. Asylum only occurs in the first country of arrival, not the country offering the most Leftist welfare. 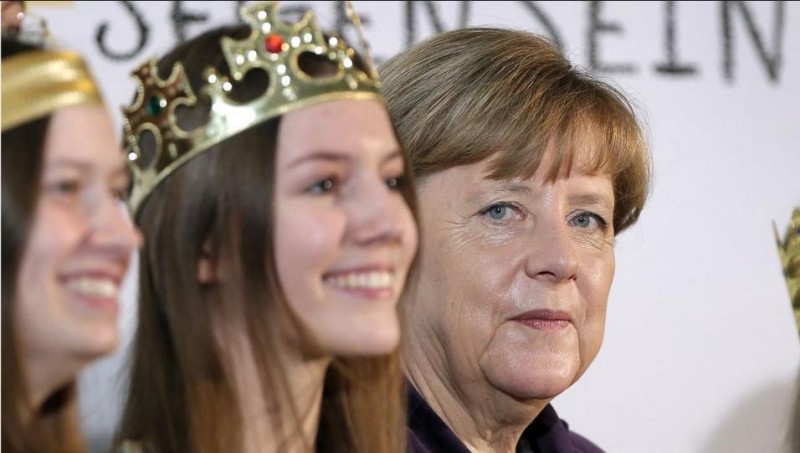 Merkel is unworthy, she’s got to go.

These rapes should be an albatross hung around the necks of Merkel’s Left and specifically feminists that are for more refugee resettlement.

Opposition politicians called the events of New Year’s Eve “the epitome of state failure”.  The Christian Democratic Union (CDU) has demanded an explanation why Jäger still hasn’t corrected police statements about what really happened in Cologne earlier. On New Year’s Day, local police had still reported that celebrations to ring in the New Year had been peaceful.

Jäger and Merkel need to fall on their sword just as police chief Wolfgang Albers has and Cologne mayor Henriette Reker who has blamed the rape victims for the Cologne NYE Attacks.

Meanwhile, to counter further Leftist appeasement, Germany’s Justice Minister Heiko Maas says the sexual assaults in Cologne were ‘coordinated and prepared’ ahead of time. “They were not the result of an opportunistic mob mentality but a thought-out, planned attack on the city’s women.”

The number of cases reported to police after a night of mass sexual assaults and thefts rose to 516 on Sunday, sharply up from a previous 379.

The wave of crime on New Year’s Eve is mirrored in the northern city of Hamburg, where 108 cases were filed, as well as in other German cities such as Stuttgart. 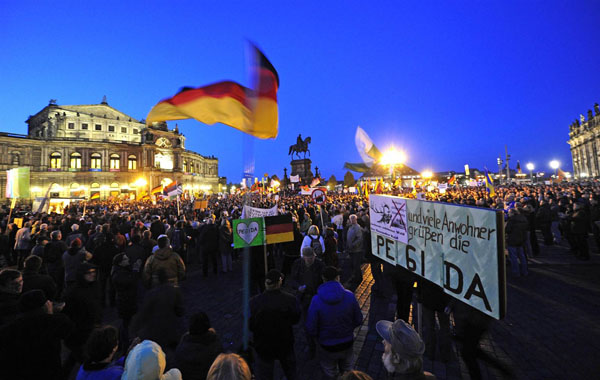 Germans have come out protesting in the streets.  The Alternative for Germany (AfD) party, and PEGIDA held community marches outside Cologne train station last Saturday.  The turnout numbered over 3000.

Interesting that this time the police riot squad turned up in force.  Where were the pussy-footing police on New Year’s Eve? 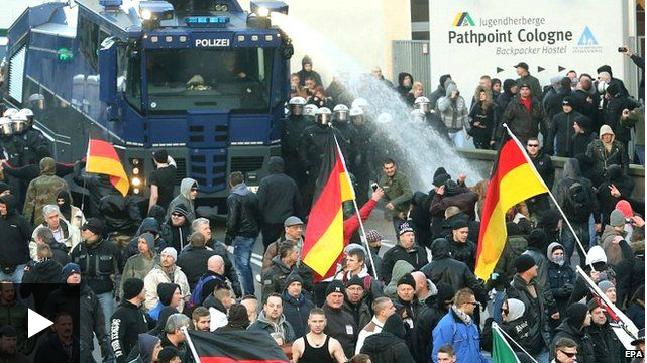 For Pride and Freedom

Thousands of Germans, particularly in Dusseldorf,  the capital of the state of North-Rhine Westphalia, have joined Facebook groups claiming to promote vigilante city patrols in light of the Cologne assaults.

If the police won’t protect society from the marauding Muzzie Sand Niggers, someone has to.

Otherwise Germany will succumb like Sweden, the muzzie rape capital of the West. Sweden began opening its doors to Muslim immigrants in the 1970s. Today it pays a high price for having done so. The group suffering the severest consequences of such an open door policy has been Swedish women.

As Muslim men immigrated to Sweden, they brought with them an Islamic culture sanctioning rape. It is a culture bad enough inherently in the treatment of its own women. Under sharia, Muslim women serve little more purpose beyond catering to their husbands’ sexual demands. A non-submissive wife runs the risk of being raped by her husband.

But under sharia, this rape culture also impacts upon Swedish women as they are “infidels” and, as such, are — according to Allah’s teachings — sanctioned targets for rape by Muslim men. Such an Islamic belief system has born witness to a drastic increase in rapes in Sweden — more than a thousand fold — since first opening its doors to Muslim immigration.

A 1996 Swedish National Council for Crime Prevention report bears this out. It noted that Muslim immigrants from North Africa were 23 times more likely to commit rape than Swedish men. It is no wonder why today Sweden is deemed the rape capital of the Western world.

Between 1995-2006, the Swedish government tracked gang rapes, identifying a drastically increasing trend. Unbelievably, after discovering the problem, it then adopted an ostrich-like “head in the sand” approach, terminating any further studies on them . The Leftist government’s fear of being labeled Islamophobic proved greater than its concerns about warning Swedish women about the threat.

The Gatestone Institute says, “Forty years after the Swedish parliament unanimously decided to change the formerly homogenous Sweden into a multicultural country, violent crime has increased by 300 percent and rapes by 1,472 percent.”

Norwegians, Danes, Finnish and Swiss are experiencing similar muzzie molestations.  They all seem to be co-ordinated. 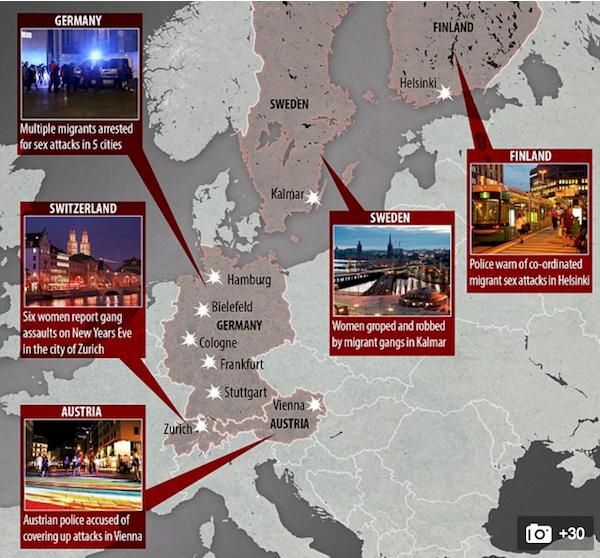 These Muzzie Sand Niggers couldn’t care less about Western laws. The invaders expect the conquered to kneel and submit. so far it looks like Europe will do so.

Germany’s reaction is to arrest and fine anyone one who objected to the invaders raping and pillaging.

In Australia there have also been some similar sporadic attacks over the years. They are likely now to intensify as refugee intakes are spiked by the Liberal government. Yes, they stopped the boats to fly the planes.

In June 2015 and Sudanese (Muzzie Sand Nigger) pleaded guilty in a Melbourne court to a rape in the suburb of Murrumbeena eight years prior.

Jal Galuak (then 13) raped a 17-year-old girl in Springthorpe Gardens, Murrumbeena. Galuak threatened to kill the girl with a cricket bat and then he raped her in a secluded part of the gardens.

Galuak was arrested in 2012 and last year was sentenced to just five years gaol.  But wait for it.  Politically Leftist County Court Judge Wendy Wilmoth has given the rapist a minimum non-parole period of just 3 years, 6 months. She will not put him on the sex offenders register despite recognising that his prospect of rehabilitation was poor.  Judge Wilmoth went on to say

“It is a serious example of a serious offence. It was a humiliating, degrading and terrifying attack.”

She said Galuak had continued to offend, committing violent crimes and serious traffic offences since arriving in Australia in 2005 until he was arrested in 2012.

Judge Wilmouth said he “had not demonstrated any chance of rehabilitation”.  She said Galuak had a traumatic childhood in Sudan and Egypt, was likely to be suffering from post-traumatic stress disorder and was of low intelligence.

Judge Wilmouth needs to be sacked by Australia’s Parliament. She no longer represents Australian values.

But he is being sorted in gaol. The court heard Galuak is currently being held in protective custody in jail and has been the victim of a prison bashing.

But in 2012 he won a reduced sentence because he suffers from post-traumatic stress disorder after a brutal upbringing in Afghanistan.

What about his victims?  He has lost all rights. 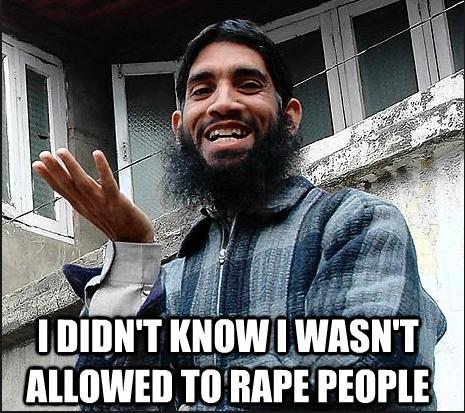