The following article is shared from our friends and Australian Council of Nationalists partners at New Australian Bulletin.

Time Magazine has done the unimaginable and admitted that a “cabal” of “powerful people” were responsible for engineering Donald Trump’s loss at last year’s US Presidential Election.

In an article titled The Secret History of the Shadow Campaign that Saved the 2020 Election’, which we link to, writer Molly Ball concedes the truth. Or rather, she posits it another way, that by operating a clandestine campaign a “cabal of powerful people ranging across industries and ideologies, working together behind the scenes to influence perceptions, change rules and laws, steer media coverage and control the flow of information,” saved democracy from Donald Trump.

Joe Biden didn’t win honestly, but it was a win for democracy. Given that the democratic process had elected (or was likely to elect) Donald Trump, it was only right that in the name of democracy they made sure that by all evidence the outcome was against him. Even if he won he wouldn’t have won. Which is, of course, what happened.

See, democracy couldn’t be trusted because it would have given a result that wasn’t pleasing to the nation’s most powerful people. So, in the name of the majority, they enacted a campaign to deny them their chosen candidate and keep the minority happy. By doing so, they saved democracy. That’s like saving somebody by killing them. That way they won’t come to any further harm.

This is the kind of logic that Xi Jinping would be proud of. The will of the people is whatever they tell you it is. The people cannot expect the system to yield to their will democratically because that would be anti-democratic. Oi vey!

Now, just to state the obvious, you don’t need us to tell you that isn’t a democracy, that is the kind of thing that you expect from a fascist dictatorship. But so addled by the twisted logic is the Time’s writer that she just comes out and says it oblivious to the fact that she has admitted what we’re all getting shut off social media for arguing — that the election was rigged.

This seems to be a major work of spin-doctoring. Nobody could be that insensible having just typed the very words on the screen. They seem to be saying, “Yes, but we did it for the best of reasons, and in that sense, we did nothing wrong.” Despite all their pleadings on behalf of the ‘democracy’ that they’ve shown so much unbridled contempt for.

Ball boasts of her article, “This is the inside story of the conspiracy to save the 2020 election, based on access to the group’s inner workings, never-before-seen documents and interviews with dozens of those involved from across the political spectrum. It is the story of an unprecedented, creative and determined campaign whose success also reveals how close the nation came to disaster.”

She writes of how both the Democrats and Republicans joined forces with big business CEOs, which hitherto supported Trump’s policies, and “inspired by the summer’s massive, sometimes destructive racial-justice protests . . . the forces of labour came together with the forces of capital to keep the peace and oppose Trump’s assault on democracy.”

Trump’s assault on democracy? Yep, after describing how they joined together to assault democracy, she transfers the blame to Trump. How messed up is that? Trump didn’t “assault democracy” they did. They admit it. They explain how they did it. Yet, it’s all okay because if they hadn’t have done it, Trump would have. And we’re not saying that Trump wasn’t above his sly tricks, but that’s been American politics since the days of Tammany Hall.

All right, we’ve established the double-speak and Big Brother logic so we needn’t labour the point, it’s just too surreal. The question then is, who were the movers and shakers behind what she was not shy about blatantly describing as a “cabal” and a “conspiracy”? And we say that fully aware that if we’d have said it, erm, we’d have been accused of spreading “conspiracy theories”. God, our head aches. Anyway, funnily enough, the Time’s story starts with the head of America’s biggest union. Mike Podhorzer has been the senior advisor to the head of AFL-CIO for 25 years. To the Democrats, he’s known as ‘The Wizard.’

Podhorzer had been bamboozled by Trump’s blue-collar voter base. After all, he was a top-tier union spook. But according to Bell, he was imagining scenarios around Trump’s re-election and his refusal to concede. All of this mush aside, it amounted to him feeling around for like-minded conspirators no matter who they were or what side of politics. One of these was the Fight Back Table, which comprised “a coalition of ‘resistance’ organisations.”

With a plan in mind, they set about collecting from “donors” and lobbying powerful people. With their ‘people base’ they set about petitioning big tech to ‘crackdown on Trump and his supporters’, which meant censoring them, and, as we saw, it’s not as though they needed to be asked. Their command was big tech’s wish.

Much funding is reported to have come from Facebook founder Mark Zuckerberg, which shouldn’t surprise anybody. Now that they were all united by the desire to oppose Trump — or reinforce democracy by nobly subverting it as Bell suggests — the Left united with what they’d regard as the Right, the Never Trumpers from the GOP. It was an ideologically bipartisan pact.

Bell sums up their strategy: “They got states to change voting systems and laws and helped secure hundreds of millions in public and private funding. They fended off voter-suppression lawsuits, recruited armies of poll workers and got millions of people to vote by mail for the first time. They successfully pressured social media companies to take a harder line against disinformation and used data-driven strategies to fight viral smears. They executed national public-awareness campaigns that helped Americans understand how the vote count would unfold over days or weeks, preventing Trump’s conspiracy theories and false claims of victory from getting more traction. After Election Day, they monitored every pressure point to ensure that Trump could not overturn the result.”

Yes, they unconstitutionally changed voter laws around postal votes, and we recall how they suddenly came to the fore for Biden when it was Trump who was out in front. Overnight the postal votes came in and wham! The media immediately called the election for Biden.

And how many of those anti-Trumpers would’ve voted for Biden in the first place if Twitter and the big tech cabal hadn’t suppressed the news about Hunter Biden and his sleazy dealings? This was a major story that was suppressed.

Then they tackled ‘disinformation’, by that we assume they meant like that about Hunter Biden, which is now readily admitted, with their Orwellian take on the truth. For instance, when Trump supporters rallied against the COVID-19 measures, such as this compulsory bondage through wearing masks, the complicit media effectively dehumanised them. They outright claimed they were spreading the infection intentionally. But when it came to the Black Lives Matter, well, their “studies” found that BLM’s flouting of the mask protocols was actually “positive.”

Trump claimed the election was stolen and was howled at from all quarters. He became a bigger villain than Osama bin Laden. Yet, here is Time stopping short of acknowledging voter fraud, but admitting everything else. Whether or not voter fraud occurred we’ll never be able to say because big tech is censoring any mention of it. Yet, on the day, so to speak, observers of the vote counting were impeded from acting as a witness to the count, and the only reason you stop people from watching something is that you don’t want them seeing what you’re up to. They talk about “disinformation” and preventing it. But that is code for ‘preventing information.’

All of the issues that Trump’s people raised over voting “irregularities” are being shut down.

So, there you have it, readers — it was all for a good cause. By sabotaging democracy and ensuring “the proper outcome” democracy has been served. What’s left of it. Which is nothing.

Don’t take our word for it, follow the link and read for yourselves. But bear in mind, that all the protestations from those identities on the Left, the Anarchists, Antifa and whatnot, whenever they bleat about ‘the state’ and ‘fascists’, the ‘Proud Boys’ and all the other crap. Just remember, they ARE the state, and here is the admission.

Also, bear in mind the Capitol Hill protesters. Kind of throws their ‘extremism’ into a whole new light, doesn’t it. . . 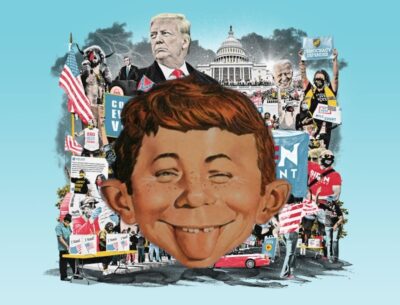 NZ MUST STOP WORRYING AND LEARN TO LOVE ISLAMIST TERROR