When Britain declared war on Germany on 4 August 1914, most Australians greeted the news with great enthusiasm. Volunteers rushed to enlist for an exciting war which was expected to be over by Christmas.

For Australia, as for many nations, the First World War remains the most costly conflict in terms of deaths and casualties. From a population of fewer than five million, 416,809 men enlisted, of which over 60,000 were killed and 156,000 wounded, gassed, or taken prisoner. 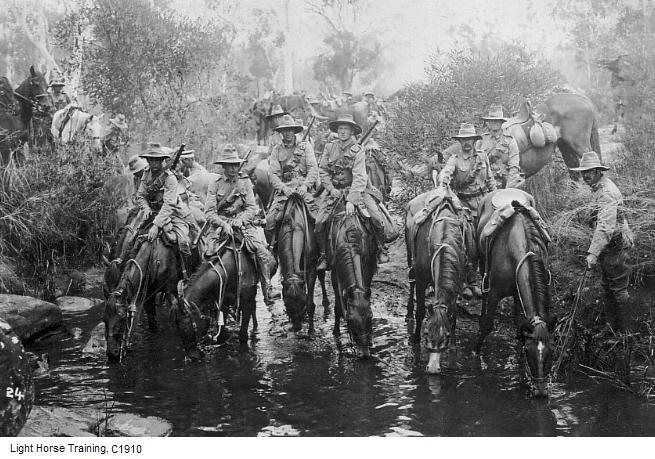 The Guns Of August: In Memorium For Our First World War Soldiers

It is generally held that the First World War commenced on August 1 1914. The guns
of August shattered a long peace. We have lived with a Hundred Years War of social
chaos, political turmoil and war ever since, a historical process which has brought
European Civilisation to the edge of collapse and the old fatherlands and
motherlands of Europe and the new lands like Australia, into an long epoch of doubt
– and demographic colonization by the Third World.

On July 28, Austria-Hungary declared war on Serbia, and the tenuous peace between
Europe’s great powers collapsed. On July 29, Austro-Hungarian forces began to shell
the Serbian capital of Belgrade, and Russia, Serbia’s ally, ordered a troop
mobilization against Austria-Hungary. France, allied with Russia, began to mobilize
on August 1. France and Germany declared war against each other on August 3. After
crossing through neutral Luxembourg, the German army invaded Belgium on the night of
August 3-4, prompting Great Britain, Belgium’s ally, to declare war against Germany.

Australia went to war with Germany and Austria-Hungary on August 4 and with Turkey
in October.

Why? What business was it of the young Nation?

In truth, all the nations were deceived and all the peoples were deceived that the war was a good thing and had to be fought. The war guilt was spread around and hardly just with Imperial Germany, as the Treaty of Versailles stated. For ourselves as Australians, we came out of it with the heroic and beautiful Legend Of ANZAC, which today can help to inspire us to resist globalisation in all its forms, but we also limped out of the war with over 60,000 dead, the slaughter of the best generation Australia has ever produced.

The emperors, kings and presidents, banks and corporations, militarists and idiots,
who gave us this war have long been beyond our reach. However, we are forced to live
with their legacy.

To paraphrase Henry Lawson: Australia must look to itself for strength in the storm
that is yet to break. Our politicians and leaders still send our troops out as
mercenaries in conflicts of no great concern to us. If the First World War should
teach anything it is: mind Australia’s business. Our great national hero (Prime
Minister) John Curtin showed that spirit, when in the First World War he opposed
conscription, but in the Second World War encouraged fanatical resistance against
Imperial Japan – a true enemy. Our enemies are always – really – close to home, or
come to us. Perhaps we will one day fight on our own soil for freedom against the
new ally (sic) of our traitor regime, China – and its proxy powers, like Indonesia?

Because it is the anniversary of the opening of the First World War, we should keep
an inner-silence for our fallen and recall the sacred trust bequeathed to us to
fight against all enemies – for our Identity, Independence and Freedom.