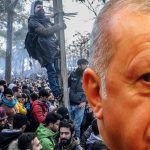 Having discharged a human wave by relaxing control of Turkey’s military zone the Mad Turk has broken his 2016 pledge to the European Union to shelter refugees until the situation recovers. His hostile act confirms that he is, unlike the much-maligned Bashar al-Assad, a global villain.

The announcement came more than a week ago as Russian-backed Syrian Government Forces staged an air offensive in Syria’s northwest Idlib province where Turkish troops are pinned down. Dozens of Turks were killed and close to a million Syrian refugees made their way towards the Turkish border.