Surf’s up and the beaches are yellow, but it’s not the sand.  Chinese tourism to Australia is up 20% on last year, with more than 1.33 million visiting us in the last 12 months. Half of the blighters, some 750000, flocked to Sydney alone.

Regrettably many are not returning back to whence they came.

Canberran Trade Munster Steven Ciobo (a dual Italian illegal) got enraptured over all da yuan spend on his watch. But Ciobo ought channel a small contributive share of all this foreign revenue to Australia’s volunteer surf life saving clubs.  They are overburdened by rescues of delinquent foreigners – especially of hero asians.

So proposed is a $200 Foreigner Surf Rescue Levy on each foreigner entering Australia.  This revenue would go a long way to properly funding the 300 odd surf clubs and 500 odd lifeguards patrolling Australia’s extensive surf coast. Most of their time is spent rescuing delinquent foreigners who choose to ignore Australian advice, by swimming outside the surf patrol flags and outside patrol hours – ignorant and apathetic. 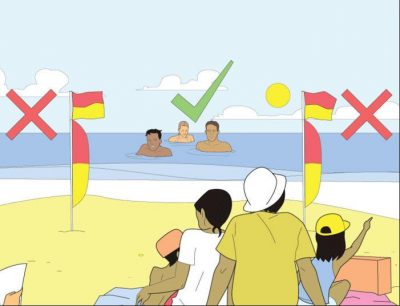 How hard is it?   No translation necessary.

(The image is even leftard multiculti)

Yet how many surf rescues involve delinquent foreigners?

On New Years Day 2018, five asians pretending to swim at Birubi Beach near Port Stephens got caught in a rip about 1km outside the patrol flags.  The surf patrol had just ended, when a 000 call got relayed to the Birubi Point Surf Life Saving Club at 5:05pm (after hours). 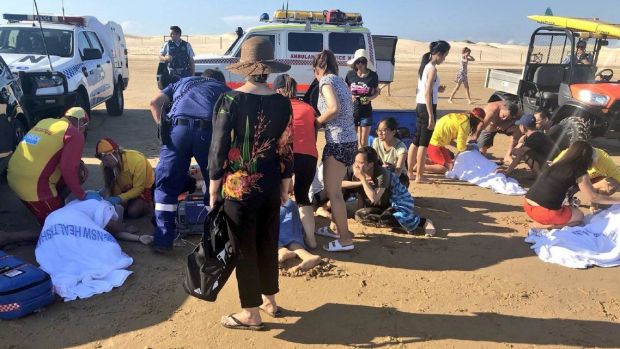 The surf patrol captain should have just said:

“You swimming outside flags big time. We’re closed and now onlookers, so sorry.”

Two weeks prior, a foreign woman and her family of five were pretending to swim at unpatrolled Diggers Beach at Coffs Harbour at around 5.40pm (so after hours) when they all got caught in a rip.  The media reported that they were British.  Fake news!  They were pakistanis with British passports.  One succumbed.

On New Year’s Eve, two ethnic brothers from Parramatta (probably arabs) went swimming in a rip at Frazer Park Beach on the New South Wales Central Coast, and one succumbed. It was 300 metres from the patrolled beach and around rocks.

On Christmas Day, eight Sikh indians who don’t believe in Santa, went for a swim at Point Danger (Tweed Heads).  The local council had renamed the beach Duranbah Beach and the beach was closed (due to Christmas public holiday), so the indians were ignorant.

The indians got caught in the notorious rip and local Christmas revellers on the beach watched on as ‘onlookers’ sipping their champas.  Lifeguards on triple-time attempted a rescue assisted by a few keen surfers, but one Ravneet Singh Gill (22) succumbed.  All eight hindu indians were backdoor immigrants pretending to study business at Southern Cross University. 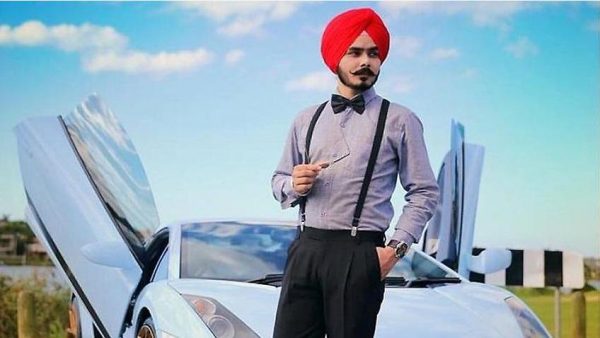 As Sikhs, they don’t do Christmas but wait till January 5 to celebrate the birthday of some 10th guru, Guru Gobind Singh.  Whatever.

They ignore Australian customs and rules like “swimming between the flags’… so whatever.

December 6 and at Coolum beach, south of Noosa, eight so-called ‘swimmers’ had to be rescued after getting into a rip well outside the patrolled beach.  Media don’t report ethnicity because they know we’re on to them, but let’s presume the eight are all ethnic dopes.

December 4 and a 26-year-old ethnic was found floating facedown in big surf (‘freak’ waves) and sewage outflow at Bondi Beach. Last March five tourist ethnics in their sixties decided to try swimming outside the patrol flags at Bondi Beach. A mass rescue again with a 69-year-old succumbing.  Whatever. 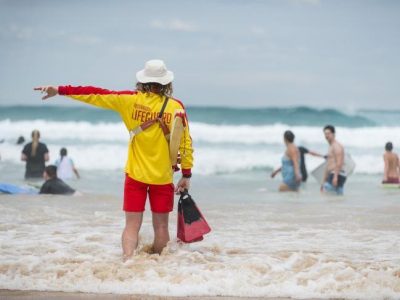 November 26 (2017) and twenty teens got caught in a rip at Surfers Paradise.  Surf Life Savers had to do a ‘mass rescue’- ethnic presumption as media did not disclose again.

Last September (2017), two kids Yazan (12) and Ahmed Hammad (10) and their dumb father (all muzzie arabs) were visiting the unpatrolled beach south of Wollongong.  They got stuck in a rip and a local drowned trying to save the shits – waste of a good Aussie!

The mother, say no more: 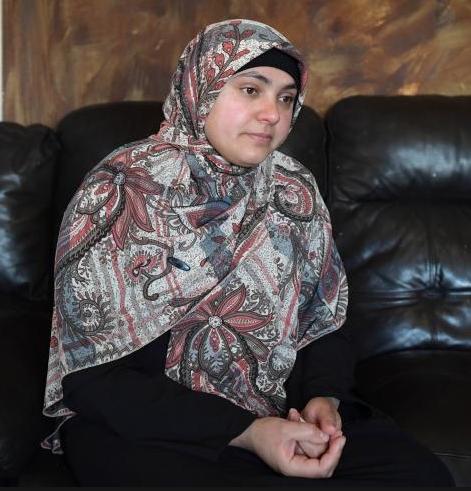 In Victoria, life saving data released in March 2017 showed the number of drownings was up 39% on the state five-year average. Why?

A shitload more problematic ethnics dumped on Melbourne and so surf life saving.   Another 245000 immigrants flooded Australia last year – mainly in Sydney and Melbourne.  Then they wade out into the surf with NFI.  “What’s a rip?”

Who’d volunteer in surf life saving when ya know the odds are you’ll get an ethnic fool or five outside the flags and so risk your own skin for shite?  And mouth-to-mouth with a Third Worlder, you don’t know what you’ll catch. 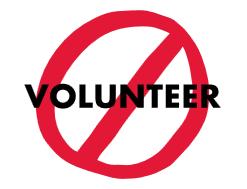 PM Malcolm Turnbull at Christmas signed a taxpayer cheque for a lousy $3 million for Australia’s 300-odd surf lifesaving clubs and 500-odd lifeguards.  It’s supposedly to fund drones just to find delinquent foreigners swimming outside the patrol flags or after patrol hours before they succumb.

That’s big of Mal – stretching the volunteer ethic for his own ego PR or what?

In the year ending October 2017, Canberra let in 8.7 million foreign ‘visitors’, up 7% on 2016.  That’s on top of the 245,000 net immigrant impost.  Combine the foreign visitors and the immigrants (say 9 million foreigners) – and charge them each $200 Foreigner Surf Rescue Levy, the revenue would well fund Australian surf life saving to the tune of $1.8 billion every year.  This would way allow Surf Life Saving Australia to better cope with delinquent foreigners swimming outside the flags.

Did ja hear the one about the japanese surfer dude at Bulli Beach this year?

January 14 2017 and a jap (37) goes surfing solo off Bulli Beach near Wollongong and manages to get swept 6km out to sea.  He spends the night sitting on his board until in next morning a 300-metre long container ship, the MSC Damla, picks him up after spotting him in its shipping lane around 9am.  Beats surf rescue paddling out on their mal to rescue the idiot.

“They told me there was a big set out the back”

As if all the asian rockfishers aren’t a worry not wearing life jackets.

Over in Western Australia, the number of asian rock fishing drownings at Salmon Holes near Albany is so prevalent that the locals dub the spot ‘suicide rock’.   WA could feed off Dan Andrews’ euthanasia tourism initiative in Victoria.

Salmon Holes on April 18, 2015 and chinese nationals Jiaolong Zhang and Chunjun Li were swept into the Southern Ocean while fishing in a massive six-to-seven metre swell.   What a boon for onlooking tourism – like a maritime colosseum!

Albany local and career St John Ambulance officer Michael Ficko, an experienced fisherman and surfer, said when he turned up at the scene he was shocked at the “horrendous” size of the waves.  He said he was “dumbfounded” and it was “mind baffling” why anyone would consider fishing that day.

Someone said “big seas means big fish” and so hero asians are all into it.

Thirteen people have died at the same spot since 1974 — six in the past 10 years – mainly chinese. 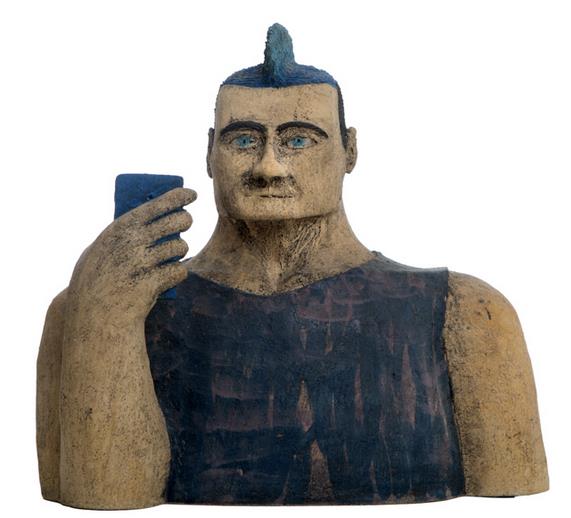 Outside the patrol flags or after hours, surf patrollers have a right to revert to onlooking at ethnics flailing in surf.