Mike Baird, arrogantly continues to dismiss community rejections, protests and court action. He is unilaterally ordering most of the state’s local government councils to disappear and be merged into large, more convenient mega councils with less staff and fewer, distant services.

“You have no choice.  I know what is right.  Today is that day.” 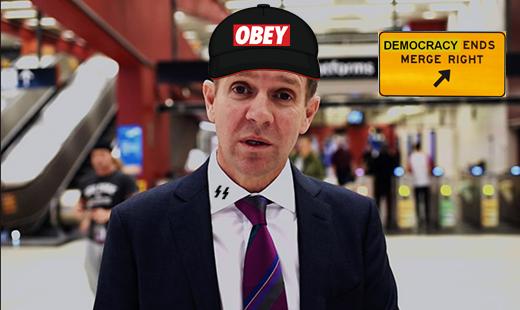 Under the Baird Liberal Government’s plans, the number of Sydney councils would be slashed from 43 to 25 and NSW regional councils cut from 109 to 87.

It is part of the Liberal Party’s Asianisation ‘Fit for the Future‘ model to accommodate mass immigration. “It is about stronger mega councils, reducing waste, reducing red tape, and saving $2 billion over 20 years,” declares Herr Baird.  He claims that council amalgamations will lead to lower rates and improve service quality.

But this is crap.  The Libs entire amalgamation ploy relies on one dodgy report they commissioned at taxpayer expense.  They outsourced a review to one of its bribing political donors, overcharging accounting KPMG, which rung in a consultant who prepared a cooked amalgamation report to suit the Liberal’s merger plans.  Using wrong formulas with the wrong data means you’re going to get the wrong result.

Professor Brian Dollery, the director of the University of New England’s centre for local government, described the report as being “awash with errors”.

Professor Dollery said KPMG had presumed employment costs across merged councils would decrease, but he said recent history in Queensland showed staffing costs grew by 8 per cent a year after mergers, at a rate much higher than non-merged councils.  He also accused KPMG of employing different calculations in reports commissioned by state governments – who support amalgamations – and recent commissions from local councils, many of whom wanted to argue against them.

Professor Dollery said KPMG had presumed a 2 per cent reduction in costs of materials after amalgamation in its analysis for the state government. But in a similar report, commissioned by a regional council, KPMG had used a lower saving of 1.5 per cent.

“Across the state that would amount to millions of dollars in difference,” he said. “One has to ask why this difference exists. One explanation is in the maxim, ‘he who pays the piper calls the tune’.”

The thousands of council staff sackings will cost millions in redundancy payouts by the Baird Government.  But KPMG’s dodgy report underestimated the cost considerably, presuming wrongly that the rate would be based on a national employment award, but they are not and in fact far more generous.  Try $10 million!

The report cost $400,000, and the entire programme, including IPART’s involvement and the hollow consultation process, has cost far in excess of that.  Yet Baird has refused to release the pivotal report publicly.   He is unilaterally imposing forced mergers based on secret information.  The entire amalgamation is another Liberal Party thought bubble.  It is corrupt from the outset and likely dreamt up at one of those Liberal Party Fundraiser dinners.

Baird’s Blitzkreig attack on 42 councils today is a convenient ‘one-size-fits-all’ centralisation of command and control, dumbing down and silencing local dissent.

The entire programme is driven by developer vested interests and a few Liberals corrupted by receiving donor bribes.   It ties into the Liberal Party’s neo-liberal mantra of ‘Jobs and Growth‘ – but jobs for immigrants and growth from their highrise development.  The Liberal Party is all about globalism (just like Labor) and making urban Australia fit for an Asianised future.

Ordinary Australians don’t bribe so don’t have a voice when it comes to the Liberal Party.  Remember corrupt Barry O’Farrell and his 1959 Penfold Grange donated by corporate vested interests.  Bazza was one fully lubricated Lib. 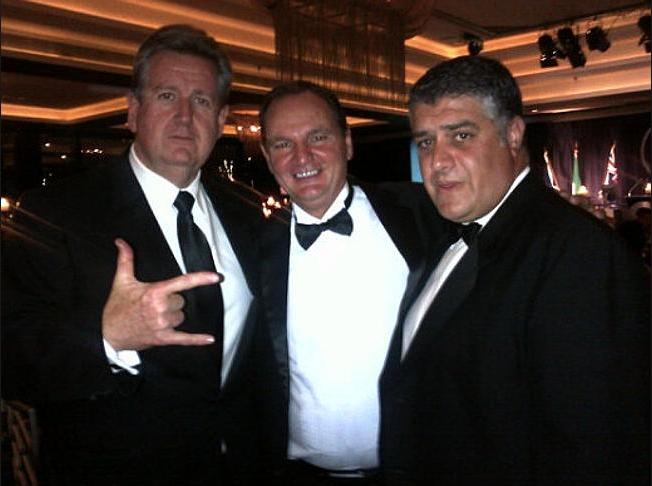 The Libs in New South Wales continue to be exposed for dodgy deals and corruption, following the similar culture of Labor.    Liberal laundry man Arthur Sinodinos was NSW treasurer of the Liberal Party who oversaw millions in illegal donations from developers to the Liberal Party, according to the NSW Independent Commission Against Corruption recently.   He stood to make ‘tens of millions’ as chairman of Australian Water Holdings, a secret donor to the Libs money laundry fund, the a shadowy Canberra-based organisation called the Free Enterprise Foundation.

The Libs have been exposed so far with another twelve MPs linked to secret developer donations. 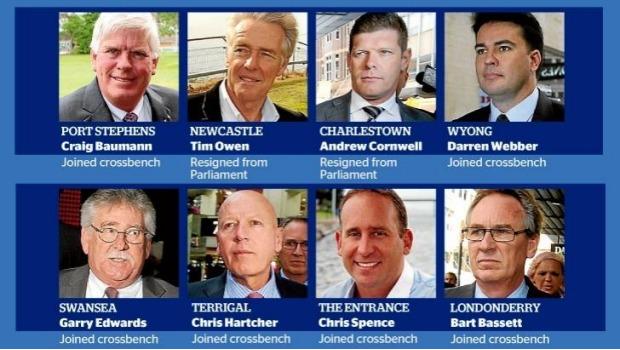 But less highrised councils of Marrickville, Manly, Randwick, Rockdale, Holroyd, Ryde, Lane Cove, Gosford, Pittwater and Dubbo and their heritage and community infrastructures will disappear from tomorrow.  Suburban Sydney and NSW Towns are just not fit for mass chinese! 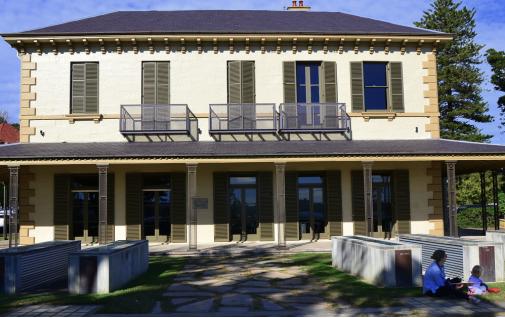 As to be expected, the Liberal Party’s prized strongholds like the Hills Shire and Hawkesbury City in Sydney’s north, Shoalhaven and Kiama in the Illawarra, and Walcha and Tamworth in New England are each reported to have been saved from forced merger,  because of the looming Federal election. The Liberal Party’s bastion of Hunters Hill, the state’s smallest council has also been given a stay of execution.

Far-Right Politics has disdain for democracy, instead favouring the vested interests of a privileged class like big business (banks, developers, gaming) and perpetuating the establishment power and its social hierarchy.  Cronyism, entitlement and corruption is rife. 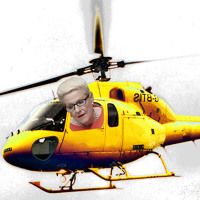 The Liberal’s narcissistic dictator knows what’s good for the rest of us.  Baird’s Brown Shirts have already gone in and evicted the councillors and staff of the targeted councils. The locks are being changed tonight.

Das Führer has announced that his Big Brother Blitzkrieg will be launched against the following councils:

There are historic parallels associated with Far Right Politics. 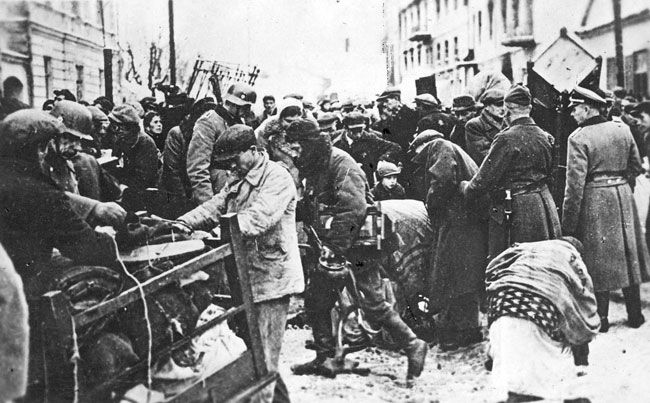 A variety of councils across NSW have taken take legal action against the NSW government to stop amalgamations, including Botany Bay, Woollahra, Kiama and Walcha councils.

Pending the legal challenges by the following councils against the Big Brother Blitzkrieg, das Führer has threatened to merge them anyway (after the Federal election is ‘out of the way’):

Mass Sackings and the End of Communities 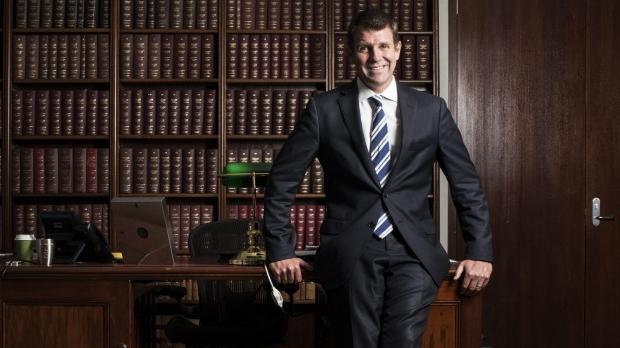 Baird’s forced council amalgamations Blitzkrieg was announced corruptly on December 18, 2015, while everyone was distracted by Christmas.

How sly!   They say the best time to invade Australia is around Christmas time.

The Liberals’ forced council mergers will see most council staff sacked.  None will be able to get a similar paying job locally.  It will sever income to thousands of dependent families.  It will force many staff into unemployment or to early retirement.  Money circulating in local communities will dry up. Many will have to sell up or default on their mortgages.  Not only will the council staff disappear to a sad demise, but the local community services, the familiar comradeship and the heart of local communities will be ripped out.

“I wanted to extend Woollahra’s hand of friendship and support to other councils in this struggle against forced mergers.  Employment of council staff in small communities is one of the drivers of the local economies and the loss of council jobs through mergers will be the beginning of the end for many country towns.” 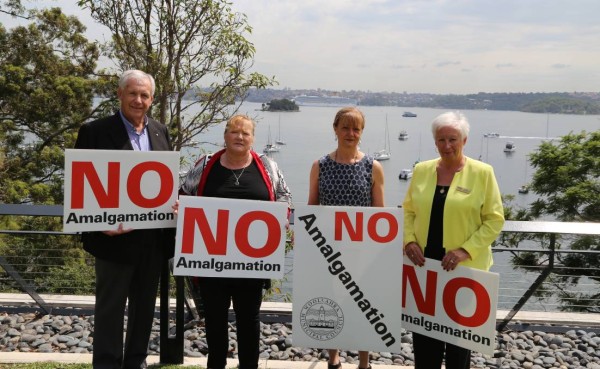 The Liberal’s forced council mergers will decimate councillor representation of residents.   In the Illawarra for instance, one councillor will now serve more than 20,000 residents.  Imaging trying to get through to your local councillor?

Baird’s planned Wollongong/Shellharbour council is to be responsible for infrastructure and service delivery to about 276,000 residents; but with the Liberals’  ‘growth and jobs’ immigration mantra, that figure is forecast to reach 316,000 by 2031.

Wollongong City Council currently has 13 councillors covering an area of 684 square kilometres, while Shellharbour’s 147sq km is represented by 7 councillors.  A combined council would have 13 councillors – a ratio of one to every 21,197 residents.

The special character and amenity of each shire is to be destroyed into a monocultural urban sprawl.  Baird’s simple-minded ‘one-size-fits-all’ approach sees all councils across Sydney and New South Wales eventually fit into the Blacktown City Council template – characterised by high rising, congestion, multiculturalism, crime ghettos and a target for mass immigration.

And it is all completely unnecessary.

Community Backlash set to evict the Liberals from Government 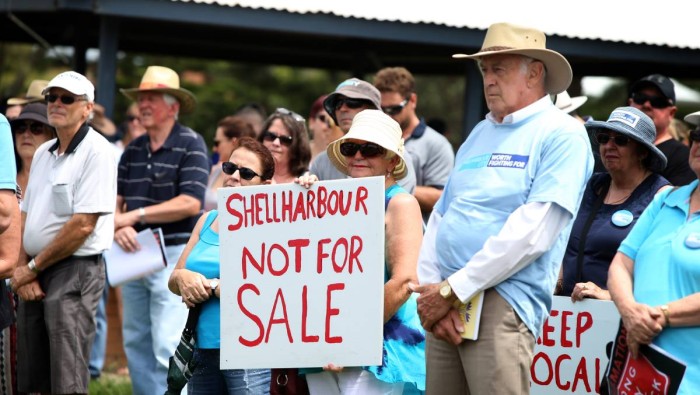 No-one except the corrupt Liberals and their cronies support the forced mergers.  Most residents are fuming that their democratic rights have been railroaded.

Shellharbour Mayor Ms Marianne Saliba says, “This isn’t a merger, this is a takeover. The state government are just absolutely ripping the guts out of the people of Shellharbour … they haven’t provided any genuine evidence to say what the benefits of this are going to be.”

Many councils have joined forces in a united coalition against the Liberal Party’s Right Wing tyranny.  Save Our Council Coalition (SOCC) has been formed with many councils “big and small banding together” to challenge the undemocratic amalgamations.

Mosman Councillor, Tom Sherlock, and SOCC spokesperson says he was in awe of the community resolve shown by rural and regional councils uniting with city councils.

“This is a marvelous aspect of what has been an appalling process. Councils across NSW realise how important community is.  Council is the most important thing to maintain a sense of community.”

Time to Draw Upon the Australian Spirit of Eureka!  Democracy first. Baird last!

Vote the Liberal Bastards Out of Office!