“The fact that extreme-left groups and anti Australians of all types mass on May Day to push the globalist agenda means that Australian patriots should look, ultimately – to reclaiming May Day, that is May 1 annually. 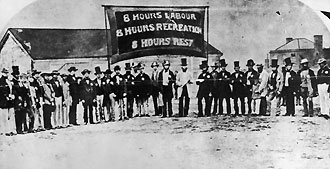 Reclaim May Day – why not?

It’s true, as the great nationalist Labor politician Jack Lang put it, that the Lambing Flat Uprising of June 30 1861, was also a great day in the advance of “free labour in New South Wales”, an event he said on par with Eureka Stockade in Victoria. Lang noted this time demonstrated the advance of cheap Chinese labour and the need to protect a local standard. Clearly, Australian workers can celebrate their achievements on June 30 if so minded and in accordance with our radical-nationalist tradition. 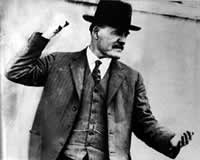 However, May Day also has developed a special significance. It is also a cultural symbol and was in better days a true festival of Australian labour.

Globalisation is the mortal threat to Australian labour today. And with it comes with it not just the destruction of local industry and jobs, but the importation of various forms of contract labour.

Right now, we are threatened by the latest development in globalisation – the Trans Pacific Partnership. Some union men are against and every worker knows in his guts what it will mean. Yet, other than a few groups of nationalists, no one speaks for them.

I note that some of our European nationalist friends have taken to demonstrating on May Day. They have campaigned amongst European workers to demonstrate that the real challenge to globalist capital does not come from the Left.

In co-operation with all other Australian patriots, I think that Australia First Party should in 2016, begin the process of reclaiming May Day for the Australian worker! The challenges are right in front of us and demand a true response.” 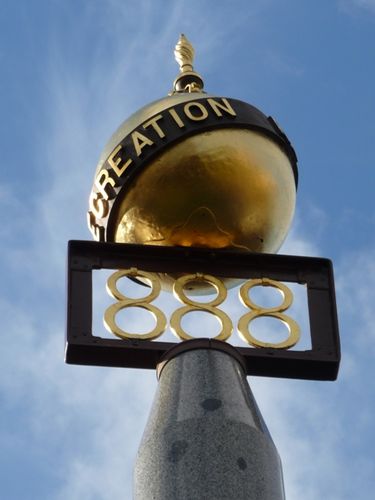 An Aussie May Day badge was designed by A.W. Patrick in 1954, commemorating the centenary of the Eureka Stockade rebellion which occurred at Ballaarat on December 3, 1854.  It began as a miners’ strike and ended in the blood spilled of 22 men.  Eureka Stockade has had an enduring effect on Australian workers’ rights.  As an outcome of protest marches by stonemasons in Melbourne, the eight-hour day was introduced into the building trades in 21st of April, 1856, just two years later.  Full white male suffrage followed and ultimately the birth of democracy in what would become the Australian nation. 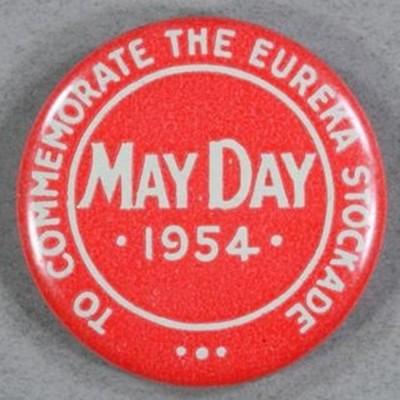