Most of dem immigrants congesting Australia’s city roads got their licences out of a Third World Weet-Bix packet. 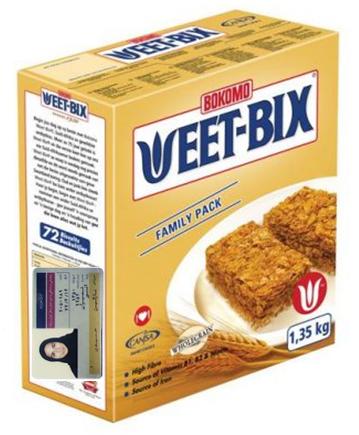 They rock up here flashing their dodgy international driving permits to their Third Worlder compatriots employed by our public service to get rubber stamped proper Aussie drivers licences.  It’s another Canberran immigration rort and a licence to kill us.

This morning in Sydney’s full-blown South West ethnic enclave of Greenacre, an ethnic drove her Toyota Kluger into the Banksia Road Primary School Year 3 class, on Tuesday November 7 2017, mowing down eight year olds.  The 52-year-old mother, was apparently dropping off one of her 15 kids late for school at 9.45am. 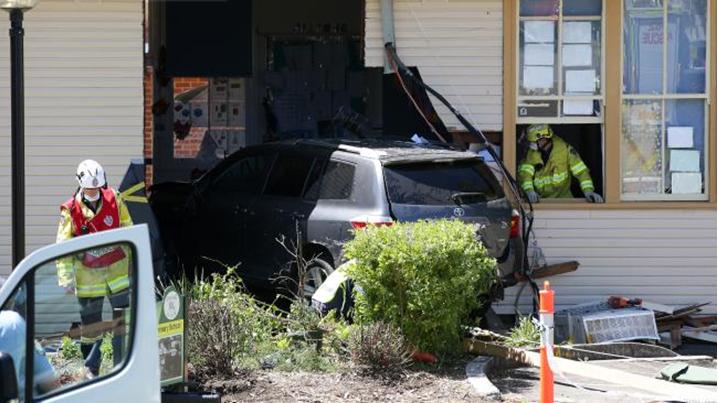 Two boys, aged eight, have died and other kids are maimed or else traumatised for life.   Onlookers rushed in to free the children pinned under wreckage, with some reportedly lifting the side of the SUV, before administering first aid until help arrived.  NSW Ambulance Zone Manager Stephanie Radnidge said the deceased boys had suffered multiple traumas and were unconscious when they were rushed to hospital.

The entire school should commence a class action against Canberra Immigration with its imposed mass immigration of driving retards killing their kids and denying safe schools.

Of course the bitch is ethnic.  Maha Al-Shennag is a fully imported muslim Arab – raghead and all.  No wonder the Saudis won’t let muzzie chicks drive – it’s from experience. They’ve got NFI. 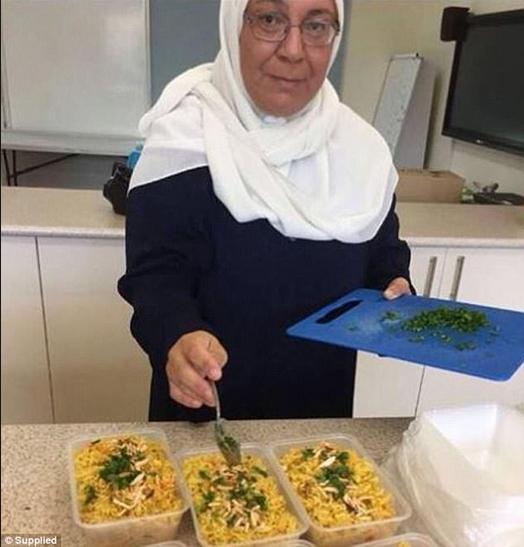 Maha Al-Shennag claims she (it) was distracted from driving when she dropped her water bottle.  But it was an Islamic Terror Attack, another one that government and senior police multiculti propaganda are trying to play down.

So what is the definition of an Islamic Terror Attack?

The deserved punishment is to reinstate ‘Term of Nature Life’ for islamics and to be auto-deported to Gitmo with life banishment from Australia.

How the SUV School Attack Happened

Tuesday morning November 7, 2017:  Full-blown islamic Maha Al-Shennag (52) returns home from another dawn prayers inspiration at Greenacre Musallah (mosque) in Sydney’s South West islamic enclave.  She’s a widow of one of those ISIS fighters who claimed to be Australian, and is vengeful.

9:00 am:  Maha fuels up her 2-tonne Toyota Kluger SUV.  She orders one of her many sons (Muhammed) in the front seat.

9:45 am:  Maha, all ragheaded up, drives straight to Banksia Road Public School at 78 Banksia Road in nearby Greenacre.

She sees the school gate sign that reads ‘STOP, NO VEHICLE ACCESS‘, but she pretends she can’t read because she’s Third World foreign.  She reads the Gonski sign alright and thinks how appropriate!  The kids are goneski, peace be upon allah. 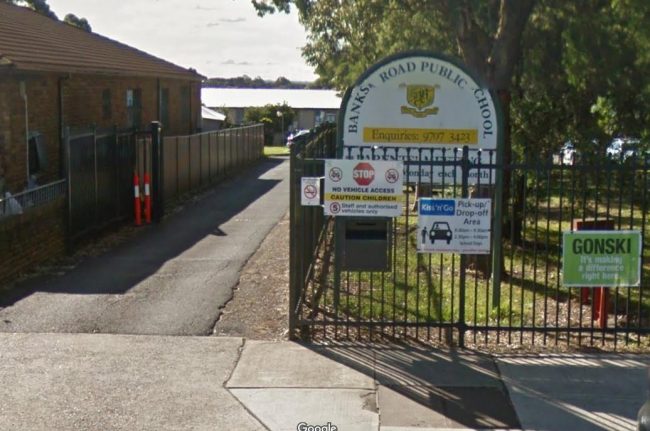 This laneway needs an Israeli Checkpoint

Maha accelerates down the laneway, sees the kids through the Year 3 class window and ploughs her SUV hard into the classroom, muttering ‘allahufuckbaaa‘, then she hops out checks for bodies and goes to the canteen to poison the other students. 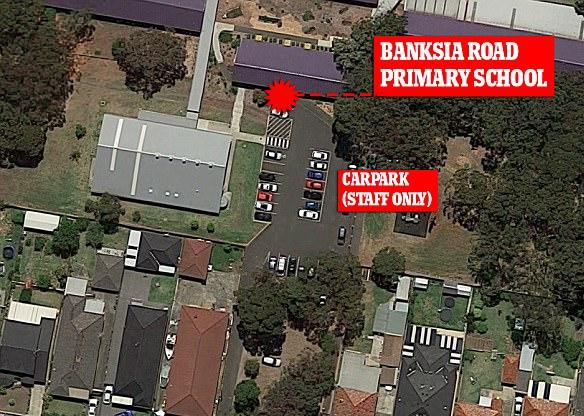 Even the staff car parking does not face towards the Year 3 classroom, so Maha’s water bottle excuse is a deliberate lie. 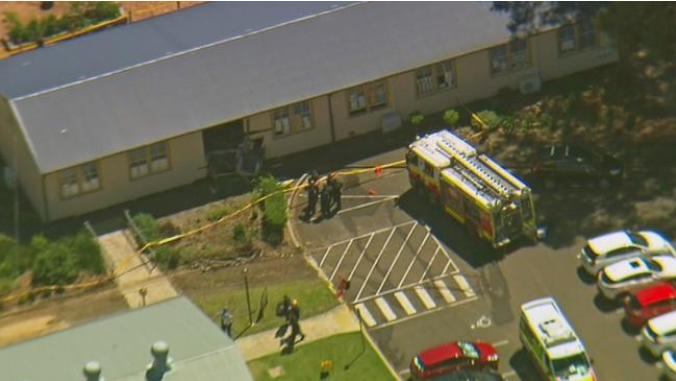 Killer Gets Bail Because Ethnic

Yet Maha Al-Shennag‘s only been charged with dangerous and negligent driving occassioning death.  The local Bankstown Court then has granted her bail because she’s minority ethnic.  The leftard judiciary in Australia apply favouritism to ethnics, especially extreme ethnics like islamics. 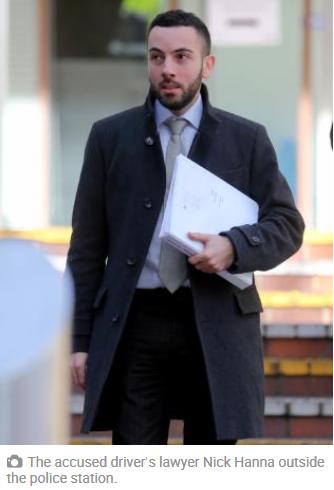 It takes anti-Autralian hate to defend an Islamic terrorist

What of the dead victims?  The judiciary cares not, they always side with the perpetrators of crime – it’s a leftard thing.

The dead victims and their families suffer.  That’s why many take the law into their own hands and we encourage it – true justice.

Following further investigations, police have laid an additional two charges of dangerous driving occasioning grievous bodily harm and causing actual bodily harm by misconduct.  This relates to Maha’s SUV crashing over three other girls, two aged eight and one aged nine, who remain in hospital recovering.  So she murdered two boys (8) and maimed three girls.  Another two are reported injured by the SUV school attack.  ‘Mass murder‘ is defined as killing three or more people. Murderig Maha manages seven, and there were a total of 24 in the class at the time listening to the teacher.

Murdering Maha is scheduled to appear at Bankstown Local Court on November 29, 2017.

A police spokesman said 24 children were in the classroom at the time of the incident. A spokeswoman for the NSW Ambulance service described the incident as “horrific”, and said responders had responded to a scene of “carnage”. 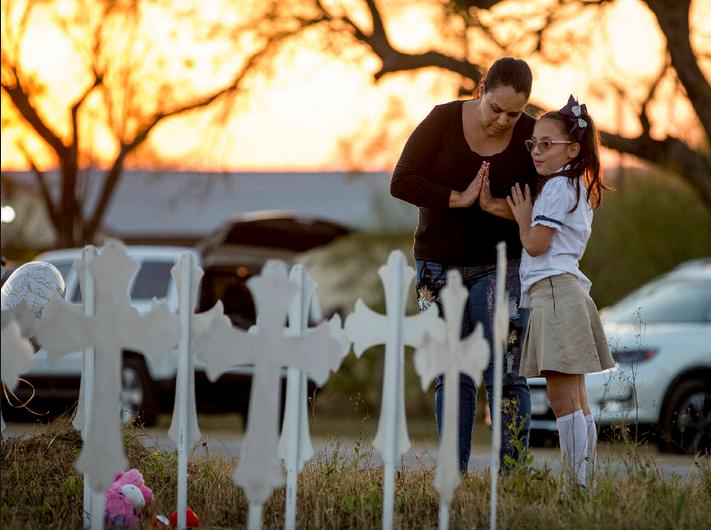 Ethnics do it downunder with SUVs. Bring on a Howard amnesty for ethnics to hand in their SUVs!

It puts a whole different interpretation to ‘safe schools’.  There are so many immigrants, schools can’t even afford decent classrooms, so have permanent wafer thin demountables.

Police reckon it wasn’t an ISIS-inspired attack, but more a brainsnap attack.  Which pedal is da brake?  The Toyota Kluger doesn’t even come in manual – a clutch pedal would have had da dumb bitch in conniption!

It is just multicult government playing down domestic terrorism, and Australians aren’t buying it. 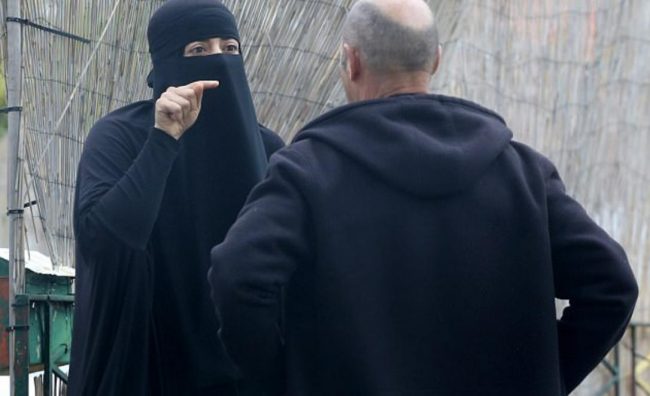 But Stokesy reckoned: “What I think is truly remarkable is that of 54 staff only one is absent from duty today. I think that statistic powerfully indicates the passion and the commitment that these teachers have to the students and the parents — it is their job to serve at Banksia Road Public School. Islamism is just a part of Sydney life now.”

“I can see no greater example of the love and commitment those teachers have for their students that despite the grief and loss they are going through today that they have tuned up to serve.”

And Stokey’s secretary Mark Scott (of ABC infamy) yesterday wrote to 2200 schools around the state pledging the department’s full support for the Banksai Road community in its grief, promising 37 additional staff to provide counselling services, keep the school running BAU and to pay for all the funerals.

No, just ban Islamic raghead chicks from owning SUVs and driving in Australia, like the Saudis do – they ought to know. 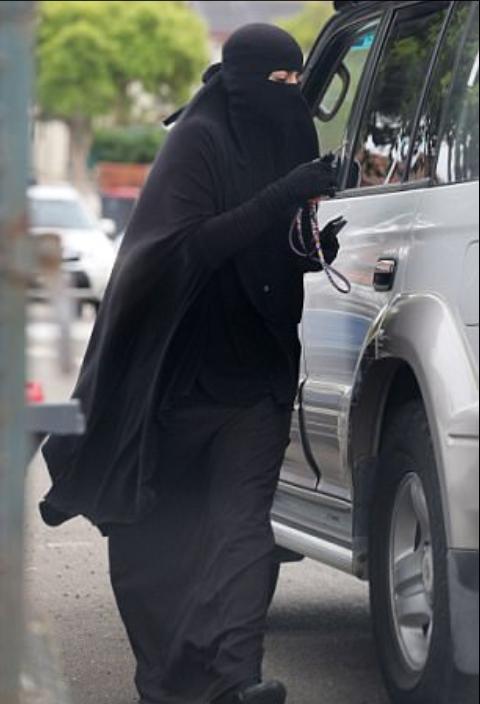 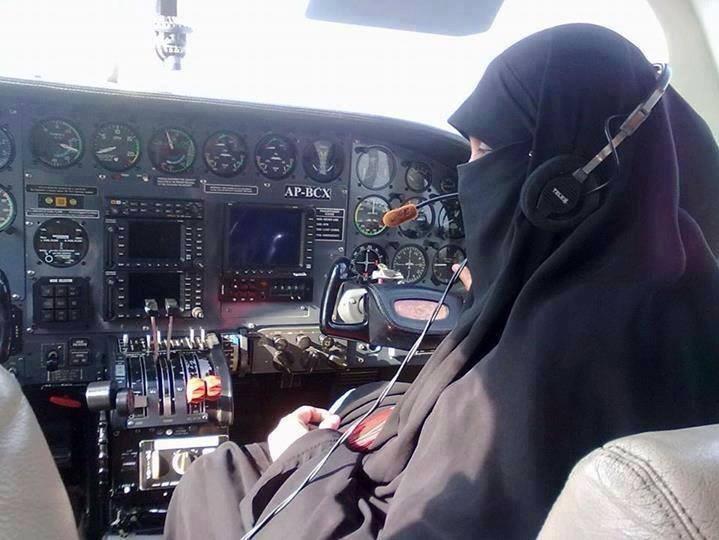 Mohammad Sabune, whose eight-year-old son was in the Banksia Road Primary School demountable classroom when the Toyata Kluger accelerated into it, told the media it was just like a suicide bomber in Baghdad, or an IED.

Now, thanks to Canberra’s Third World diversity lottery, 8 year olds in Sydney get da same pleasure as in Kabul or Baghdad.

Ever been to da Third World and tried crossing da road. Well, ask an Aussie whose dared venture to Bali or Jakarta or any Third World city.

And this foot co-ordination arrangement is just too complicated for Third Worlders to work out. 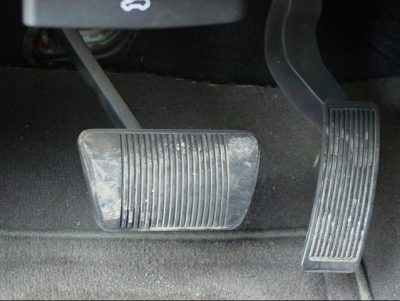 Clearly the murderous bitch needs to have her vehicle impounded, her licence revoked, tried for double murder and for the attempted murder of the other 22 kids in the Year 3 class. Then she needs to be auto-deported back to her Third World hell hole and barred from re-entry to Australia for life.

Ethnic SUV Attacks on the Rise

Ethnic Sydney August 19, 2017:  50-yo Chinese in an SUV accelerates into seven pedestrians including a toddler in a pram outside the Cup Thai restaurant in a pedestrian-only shopping mall in Anderson Street Chatswood (Chinese northern Sydney) 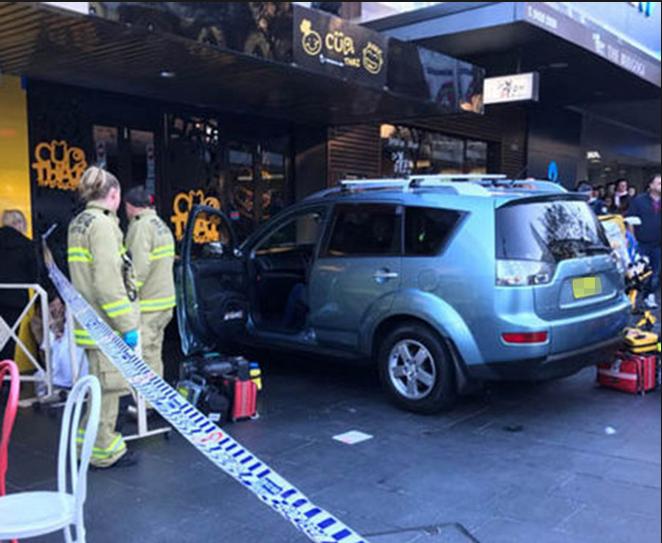 Ethnic Chatswood Friday February 24, 2017:  At around 8:30am – Chinese in a hurry mounts footpath, first striking a pram, before hitting the woman who was walking nearby along the footpath.  The vehicle then crashed into a pole, hit a motorbike and flipped onto its side, coming to rest on the footpath outside a Chinese restaurant. 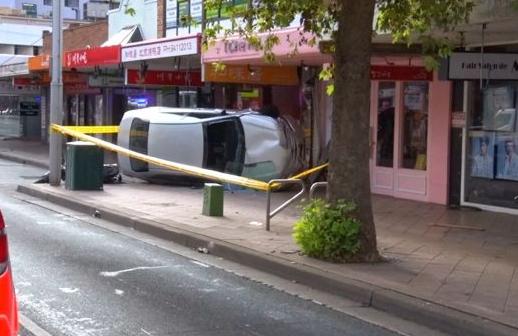 An Aussie driver (below), who wisely has a mounted and active dash cam, captures the lunatic just before he uncontrollably t-bones the bitch.   Like an escapee fleeing Pol Pot, she is spun around then accelerates away and ploughs into a house. 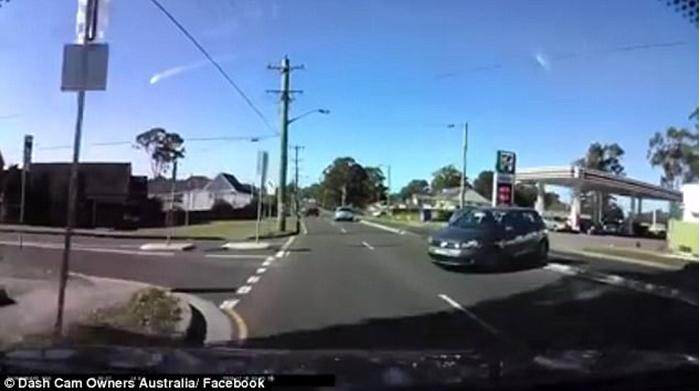 The dramatic moment a ‘confused’ elderly driver smashes into cars after suddenly losing control and ploughing into a house.

Thanks to the dash cam, the Aussie’s insurance paid up, relying upon the dash cam footage as vital evidence.  Otherwise the minority ethnic would have got default judicial favouritism.

The slope menace needs to be deported. One observant social media user wrote: ‘You mixed up the accelerator and brake pedals again!’

Frankly, Third Worlders are best banned from driving in Australia.  How can they suddenly drive in Australia after stepping through customs can they be expected to morph from steering bullocks back in their homeland to driving an SUV with satnav through Sydney? 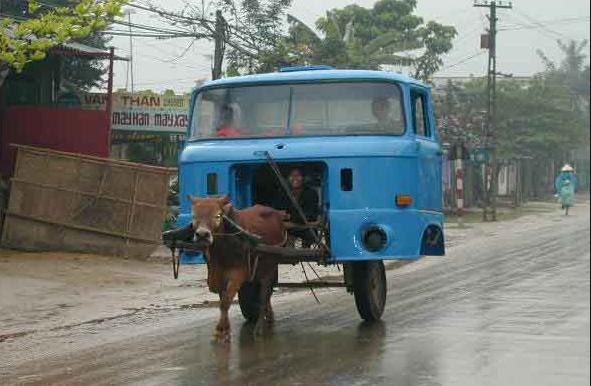 First World advanced nations like Australia could serious do without da Turd World burden.  An international driving licence from da Turd World is a licence to kill.  International Driving Licences are as crap as their diplomas and degrees.

Until the driver licensing laws are changed to protect Australians, us Australians remain at the mercy of incompetent Third Word drivers sharing our roads trying to kill us.  We reckon possibly the best Christmas present for Aussies in 2017…

Cos da efnics are now everywhere with friggen no idea