A female lawyer working for the Royal Commission into Trade Union Governance and Corruption by trade unions has been viciously bashed in a Melbourne car park and left seriously injured.

Police said the female lawyer, 50, of law firm Minter Ellison, was viciously attacked by a man while walking by a car park in the inner Melbourne suburb of Fitzroy at about 10pm last Thursday night.  She is currently recovering in hospital.

Location where the female lawyer was bashed last Thursday night

Detectives have since arrested a 41-year-old man suspected of being her attacker.* He was taken into police custody yesterday morning for questioning and is to face court this morning.  More cowardly criminal intimidation by the CFMEU?

* Since revealed as being one Benjamin George Robinson.

While the royal commission is not aware, at this stage, that the attack is related to the commission’s inquiry, it says it is assisting Victoria Police with their investigation into the unprovoked bashing.

But was the bashing provoked – simply  by a lawyer getting stuck into the Construction Forestry Mining and Energy Union (CFMEU) at the royal commission?  It doesn’t take much to provoke the CFMEU.  Its reason for existing has long moved away from protecting worker safety.  It is all about power and it has deliberately grown into a powerful militant gang.

The royal commission has been holding hearings in Melbourne this week focusing on the Construction Forestry Mining and Energy Union (CFMEU) and the Health Services Union (HSU).

The Royal Commissions is inquiring the governance arrangements of identified trade unions in Australia accused of systemic corruption.  It is investigating the Australian Workers Union, the Construction Forestry Mining and Energy Union, the Communications, Electrical, Electronic, Energy, Information, Postal, Plumbing and Allied Services Union of Australia, the Health Services Union and the Transport Workers Union of Australia.

Specifically the commission is investigating the integrity of financial management and the use of union funds by union officials across these trade unions and the extent to which any wrong doing has occurred – bribery, secret commissions, and the like.

Evidence of union corruption, intimidation and thuggery collated by lawyers are being heard by the royal commission.   It has heard a series of damning recordings, testimony and sworn witness statements implicating the CFMEU in allegations of stand over tactics, bribery, intimidation, death threats, coercion and threats on Melbourne work sites. Allegations have also implicated the union in links to underworld associates turned “union fixers”.

Australia’s Fair Work Building Commission is also dealing with investigations into 140 industrial actions by trade unions nationwide – notably across urban Queensland, Victoria, Melbourne and Adelaide.  The investigations include 19 alleged unlawful industrial actions by unions and nine ­allegations of coercion. Five right-of-entry breaches, one case involving freedom of association laws as well as others on strike pay and workplace rights are also under investigation.

Victoria Police Assistant Commissioner Stephen Fontana speaking before the royal commission in Melbourne has confirmed that police are probing organised crime links and allegations of blackmail and extortion within the CFMEU.  He has said that corruption and criminal activity are widespread within the Victorian building industry and its main union, but investigations regularly collapse because key witnesses fear reprisal.

Evidence presented by Fontana shows that outlaw bikie gang members had infiltrated the union and were being used as “hired muscle” for debt collection and intimidation, he said on Thursday.

The CFMEU is no different to an outlaw bikie gang.  It has its own gang colours and jackets. 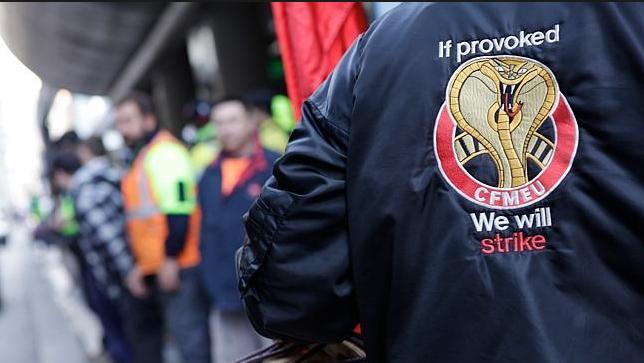 Mr Fontana said protection was needed for witnesses to crimes in the building industry, warning of an increasing problem of witnesses withdrawing complaints out of fear.

“We’ve had examples of where people have been asked to withdraw particular actions or they’ve been stood over for debts with fear of violence and on behalf of union officials or directly by union officials that have made those threats,” he said.  “Witnesses get cold feet … they don’t want to proceed because of fear.”

In Queensland, the CFMEU has been accused of “lawlessly” intimidating the customers of a Queensland crane company, Universal Cranes, unless it agreed to union demands on enterprise bargaining and a multi-million dollar redundancy fund in 2012.

According to evidence presented by the managing director of Universal Cranes, “clients wouldn’t use Universal Cranes so we lost several customers and, in some cases, customers that were in the bag,” he told the inquiry.  “The union made it clear to the clients they wouldn’t allow us to be on the site.” 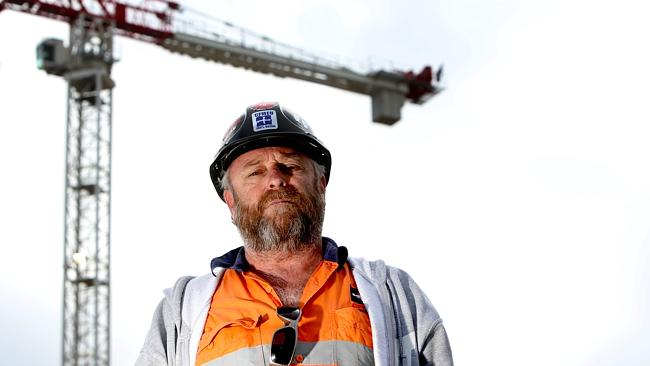 The CFMEU received $3.3 million in the past financial year from Universal Cranes’ and other employers’ redundancy schemes.  The Builders Labourers Federation’s Queensland branch, which has merged with the CFMEU, received another $1.27 million from these schemes and other employers during the same period.

Senior counsel assisting the inquiry, Jeremy Stoljar, said CFMEU officers have acted in disregard and defiance of the law, apparently with impunity.

The CFMEU even has its own Sergeant at Arms in John Setka. 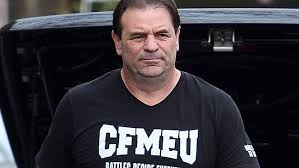 Does this man pass the “fit and proper person test” to hold union officialdom?

In South Brisbane on May 2, 2014, CFMEU ‘bovver boys’ went in with Far-Left militant anarchists Antifa to attack a peaceful march by members of the Australia First Party and Golden Dawn.  There was no provocation.

Members of Australia First were assaulted by the CFMEU in an organised attack along the streets.  While they came to look at the ‘enemy’, and served as theatre props, a small group including a number of Pacific Islanders fell under the influence of the thug group and joined in the street fracas.    Later that day a targeted cowardly attack was made by a CMFEU thug and upon several nationalists at a Woolloongabba hotel.

It has become clear as to the identity of two CFMEU organisers involved in assault with a deadly weapon – with the verbal support of an organizer from the Electrical Trade Union (ETU), Peter Ong – one Joe Myles, a CFMEU Victorian organizer, and Luke Collier a Queensland CFMEU organizer.  Legal action is pending.

Australia First did not cause the CFMEU group to be present at our South Brisbane rally site. We did not cause them to con the workers out of two building sites to swell street numbers that they could stand about as ‘numbers’, as an audience to watch over the violence, for the purposes of the anti fascist street theatre they had arranged. We did not instigate a dozen or so from those sites to fall into line with the plans of these organizers to join them in a punch-on with us in South Brisbane. We did not cause them to stalk some of our friends after the day’s events to a pub in Woolloongabba and engage in a cowardly assault on an elderly man and others and cause injuries. We did not cause Joe Myles to threaten murder at South Brisbane, nor Luke Collier to assault a young man there to steal a flag and break his finger.

We did not know that this CFMEU group would even be there. Whatever happened was their doing and not ours. 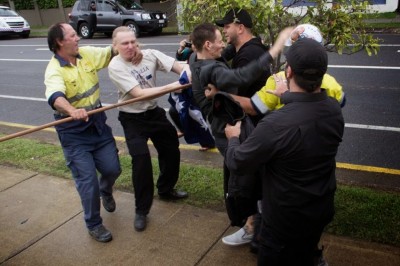 Senior officials of the militant CFMEU have been warned they could face two years’ gaol for subjecting building industry inspectors to repeated intimidation and abuse.

Giving evidence to the royal commission into union corruption, a series of Fair Work building inspectors told of thuggish treatment they received from officials of the CFMEU when they were investigating reports of unlawful industrial action.

The inspectors told how they were branded a “f..king dog”, a “f..king grub” and “lower than a pedophile” during visits to Sydney’s Barangaroo casino hotel construction site in July this year.

One female building inspector was called a “f..king slut”. She said she felt intimidated, fearing for her safety as CFMEU officials and 40 building workers surrounded her and a colleague.

In other evidence, building inspector Seamus Flynn told of the abuse he and two colleagues received when they visited the Ibis hotel construction site in Adelaide following reports that six CFMEU officials were on the premises without right-of-entry permits.

A video recording of the intimidation shows one aggressive CFMEU official, John Perkovic, calling Mr Flynn a “f..king piece of shit” as the inspector attempts to take photos. Mr Perkovic tells Mr Flynn: “You’re just about to have a heart attack, you’re shitting yellow, you piece of shit.”

Another CFMEU employee, NSW branch general manager Kylie Wray, is also under investigation since it has been revealed she deleted thousands of union emails following a notice from the commission to produce all electronic records.   She faces 12 months’ gaol if found guilty of deliberately destroying evidence.