English-speaking Hong Kong Cantonese have had no hope of sustaining First World civilised society since Britain wrongfully abandoned its colony in 1999 to the Chinese Communist dictatorship.

Any wonder that Cantonese have flooded urban Australia’s Sydney and Melbourne, and New Zealand’s Auckland?

Hong Kong’s CEO Carrie Lam (yes, sadly a corporate ruler over a democratic people) is but a socialist bureaucrat and useful puppet for the Chinese Communist Party in Peking. 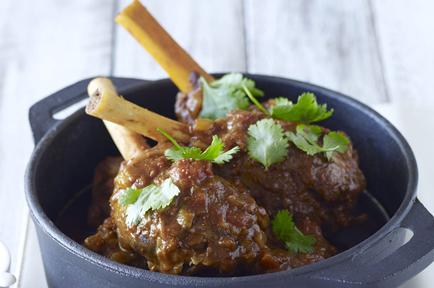 Why do Cantonese reckon she got the gig to rule Hong Kong?

Arrogant, Lam likes to remind people that she always came first in class, if people disagree with her she tries to correct them, she likes to prove that she knows best,” said Kenneth Chan, a professor in the department of government at Hong Kong Baptist University. “She does not take opposition or dissent well. And her intransigence has caused a serious governance crisis.”

She’s Communist and so pro-Peking.

She alarmed many last year when she named China’s president, Xi Jinping, as the leader she most admired. China’s most authoritarian and powerful leader since Mao Zedong has presided over a harsh crackdown on civil society, the reintroduction of mass internment camps in western Xinjiang, and a cult of personality.

Lam told the Financial Times: “I find President Xi more and more charismatic and admirable in the things that he is doing and saying.” However, she insists she is politically independent.

Lam was elected chief executive in 2017 after winning 777 votes out of 1158 from an electoral committee. Under Hong Kong’s Basic Law she is accountable to the central government in Beijing and Hong Kong.  She was summoned to Peking last month, only to return to Hong Kong decreeing Peking’s marshal emergency law to ban face masks by street protesters. 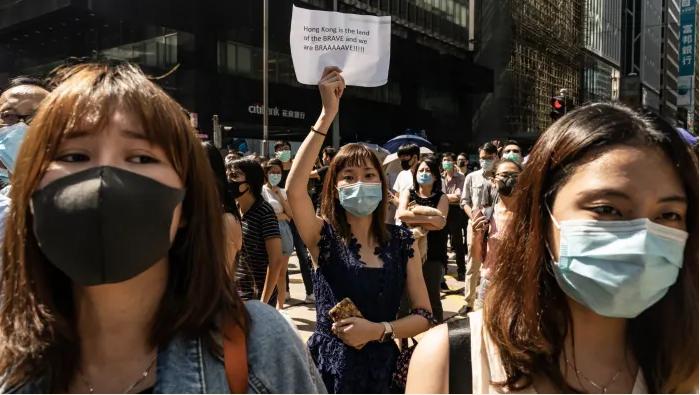 It was a deliberate provocation.

“Hong Kong has long prided herself on respecting the rule of law — the ultimate guarantee of Hong Kongers’ freedoms, human rights and way of life. It is one of the attributes that make Hong Kong stand apart from cities on the Chinese mainland. Our practice of common law, together with an independent judiciary served by high-caliber judges, has earned us the trust and the confidence of friends and trading partners all over the world. Our legal system’s predictability and its freedom from political interference guarantee that no one will fall victim to the arbitrary exercise of power by government authorities.

All of this changed last Friday when Carrie Lam, Hong Kong’s besieged chief executive, unilaterally decided to invoke the Emergency Regulations Ordinance to prohibit face masks and other coverings at public gatherings. The new regulation — formally called the Prohibition on Face Covering Regulation and, more commonly, the face-mask ban — makes it a criminal offense punishable by one year of imprisonment for people to hide their faces in ways that prevent identification, even if they are participating in lawful meetings or marches.

Mrs. Lam said the ban was designed to stop violence and restore order, but her move only added fuel to the fire. Thousands of people — in masks — took to the streets all weekend, even after service was suspended across the entire underground system. There were clashes with police. A 14-year-old was shot in the leg.

The ordinance is an archaic statute from 1922, when Hong Kong was a British colony and the acts of the city’s governor were regulated by the monarchy in Britain. Since Hong Kong reverted to Chinese sovereignty in 1997, it has had its own Constitution, the Basic Law, which is supposed to protect the city’s autonomy from China under the “One Country, Two Systems” principle. Acts of the chief executive should be reviewed for compliance with the Basic Law.

Agree to disagree, or disagree better? We’ll help you understand the sharpest arguments on the most pressing issues of the week, from new and familiar voices.

Article 39 provides that the International Covenant on Civil and Political Rights will continue to apply in Hong Kong after 1997. Article 73 vests the legislative power of Hong Kong in the Legislative Council. Article 8 says that any laws previously in force that contravene the Basic Law cannot be maintained.

On Friday, Mrs. Lam violated all of these provisions. To take one example: She usurped the lawmaking function of the Legislative Council by bypassing the council altogether. LegCo is scheduled to reconvene on Oct. 16; Mrs. Lam could have waited until then to propose her ban as a bill. She now claims that her regulation is subject to “negative vetting” by LegCo, or vetting after the fact. Yet it should not have come into force until after it was reviewed by LegCo.

Mrs. Lam announced the ban by fiat, and with that, Hong Kong has just moved one step closer to becoming an authoritarian regime, ruled at the executive’s pleasure without institutional or systemic safeguards. We are moving away from the rule of law toward rule by law.

The invocation of the emergency ordinance is unlawful, and so the face-mask ban should be deemed inherently void.

Mrs. Lam knows this fact only too well, and she knows that she may yet lose any judicial review of the law’s constitutionality.

So why did she do this?

She is reported to have initially been reluctant to pass the measure. But then, suddenly, she passed it — just three days after returning from Beijing, where she attended celebrations for the 70th anniversary of the People’s Republic of China.

President Xi Jinping might well have given her the marching order. The Chinese Communist Party (C.C.P.) is haunted by the images of millions of peaceful marchers taking to the streets of Hong Kong to demand the freedom, the human rights protection, the rule of law and the preservation of Hong Kong’s way of life that they have been promised under the Basic Law but have been treacherously denied.

The authorities’ calculation seems to be that if masks are banned, future rallies will be smaller. Some protesters will not be deterred. But others — especially peaceful demonstrators who are civil servants and employees of government-funded NGOs, Chinese businesses or conglomerates that actively trade with China — will be reluctant to assemble or march. Already, the local airline Cathay Pacific has fired employees, including pilots, who had expressed sympathy on social media for the protest movement.

“Cathay Pacific wishes to make it clear that we express no view whatsoever on the subject matter of any ongoing proceedings,” the company said.”Cathay Pacific reiterates that it abides by the rules and regulations of all regulators that have jurisdiction over us.”

One of them was arrested and charged for rioting in Sheung Wan on July 28.  The other second officer was sacked for misusing company information on flight CX216 on Monday. On that day, the airport announced that all flights would be cancelled after 6pm, following protests at the airport.

The company warned this week that staff could be fired if they “support or participate in illegal protests,” after China’s aviation regulator required Cathay to submit staff lists on flights to the mainland or travelling through its airspace. “We would like to reiterate our firm support for the Hong Kong SAR Government, the Chief Executive and the Police in their efforts to restore law and order.” 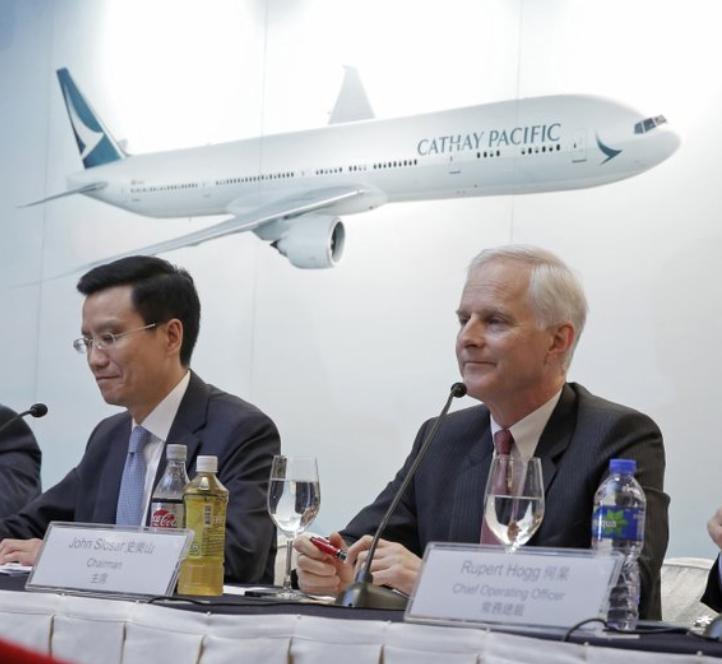 Cathay Pacific Chief Operating Officer Rupert Hogg resigned on Friday, August 16, 2019, following pressure by Beijing on the Hong Kong carrier over participation by some of its employees in anti-government protests.

Further violence on the streets of Hong Kong threatens to be its Tienanmen Square copy cat excuse to massacre Cantonese. 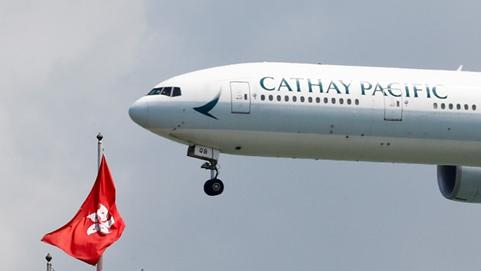 Members of the major pro-government party are also said to worry about their prospects in the district council elections scheduled for late November: Chaos would be a convenient pretext to postpone or cancel those.  Legislators from the democratic camp have started a legal battle challenging Mrs. Lam’s ordinance and are asking that it be reviewed judicially. The High Court refused this weekend to order an interim injunction to stop the ban from taking immediate effect but has said that the case could be heard in full before the end of October.

We already knew that “One Country, Two Systems” was dying; now we know that the rule of law is dying too.

British Honkers is lost to the northern yellow savages!

Whites get out now!  Smart to follow Cathay’s Robert Hogg. 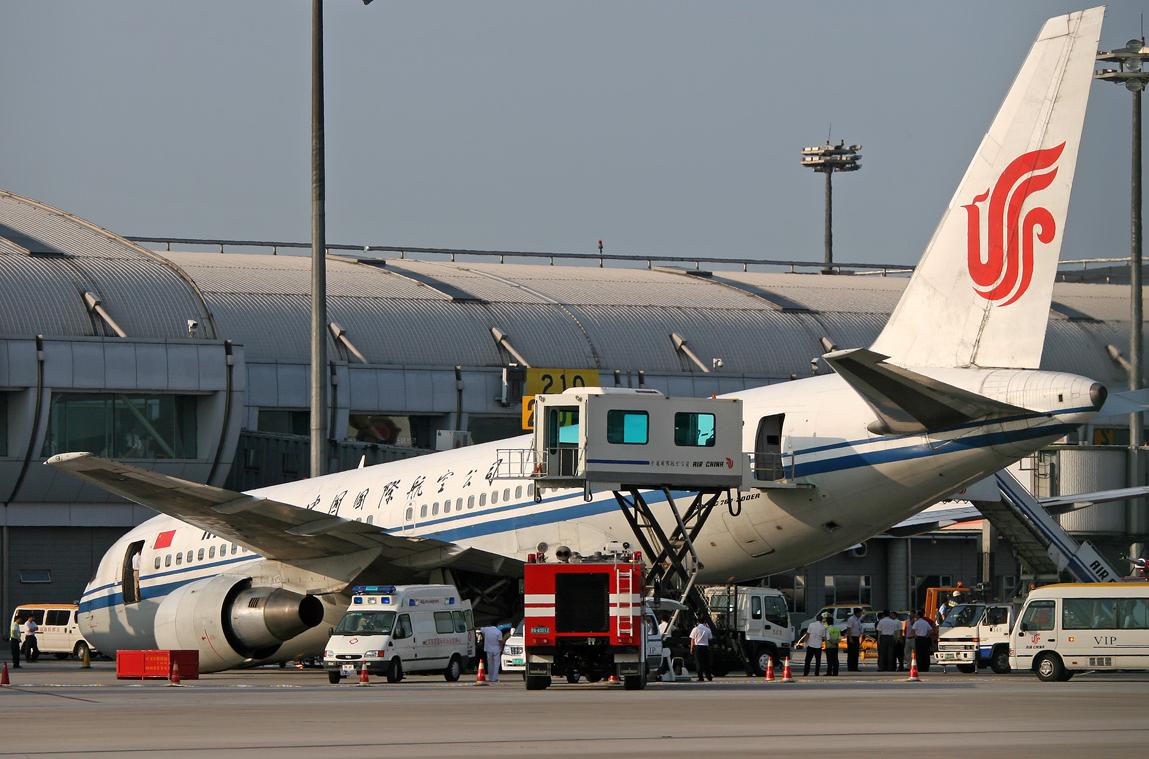