Leftist Angela Merkel has all but destroyed Germany and Europe in just one year of welcome-matting millions of Third World Arabs, doing a faster job than perhaps Adolf Hitler. 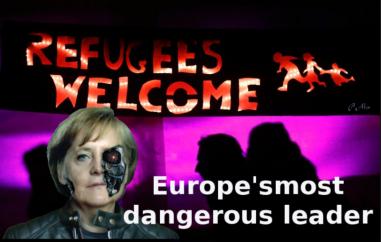 Since Chancellor Merkel introduced her controversial “open-door refugee” policy late in the summer of 2015, many German towns have seen an influx of refugees and migrants – with more than one million Third Worlders, mainly from the sectarian Islamic Middle East, Afghanistan and sub-Saharan Africa, having arrived in the country.  She calls them ‘refugees’.

Most of the immigrants live in requisitioned sports halls, disused aircraft hangars, empty barracks or heated tents.  But many have since had purpose-build hotels built for them.

Crossing multiple borders, these Arabs are beyond fleeing conflict and tales of persecution.  They are after the economic good life and European welfare.

The Prime Minister of Hungary Viktor Orban says he has closed Hungary’s borders declaring, “These migrants are not coming our way from war zones but from camps in Syria’s neighbours … So these people are not fleeing danger and don’t need to be scared for their lives,’ he said. He added how Merkel’s decision to relax asylum laws had caused ‘chaos’ and accused European leaders of ‘living in a dream world’.”

She’s just dumping tens of thousands of Arabs on to German regional cities and towns. Ordinary Germans are being pushed aside to accommodate the invading Arabs – food, housing, healthcare, schooling. 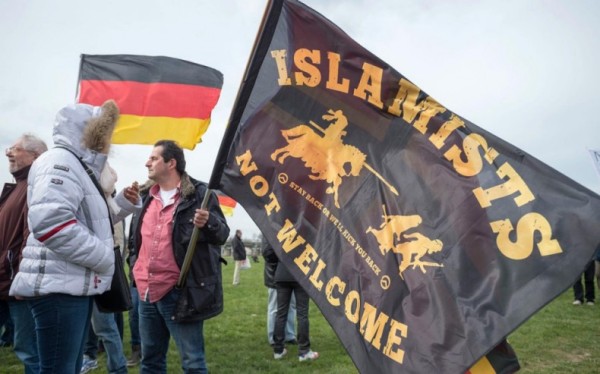 Apparently the numbers that they’ve been selling to their unsuspecting populations are wrong by at least four million. The latest invasion reflects a truer number of five million, not one million — five million invaders.

If that’s not war, what is?

Thanks to one nutjob Leftie woman, Angela Merkel, society in western Europe is on the verge of breaking down amid chaotic violence caused by economic dislocation, mass immigration and Islamic terrorism.

On one day last September, more than 13,000 migrants arrived into Munich, with locals claiming the city is on the brink of collapse. Vice chancellor Sigmar Gabriel, who is also the country’s economy minister, warned Germany is “at the limit of its capabilities.” He noted it’s not just a question of the number of migrants, but also the speed at which they are arriving that makes the situation so difficult to handle.

“The authorities are considering whether to open up the Olympiahalle – a stadium used for the 1972 Olympics and which today serves as a concert hall or sports arena – as a temporary shelter for the refugees.”

Germany’s defense minister admitted the country was on the verge of an emergency after cracks have begun to emerge in the “German generosity.”  SPD politician Brigitte Meier said that we cannot guarantee the public safety anymore. “An insisting cry for help”. 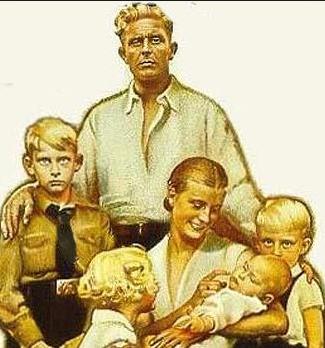 Yet Merkel is in denial, defending her liberal policy by saying she was “convinced it was right.”

But as tensions become inflamed, the German people are becoming increasingly hostile to the hordes of migrants. Frustrated locals are starting to take the law into their own hands, fire-bombing refugee centres. Riot police have been despatched in Hamburg. 4000 German troops have been put on standby.

Some more vocal critics have suggested that a 1000 neo-Schutzstaffel would sort the problem quick smart.  In 1949, 2000 former Wehrmacht and Waffen-SS officers established a small army in postwar Germany that were to be deployed against the Communists in the event of a civil war.

Perhaps history is set to repeat. 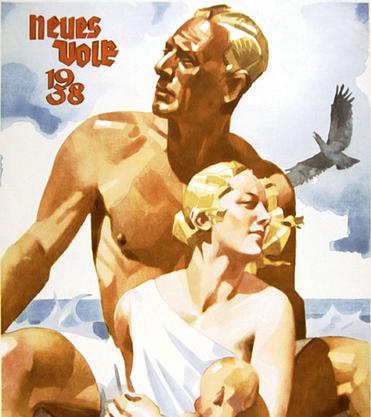 Although the mainstream media has been careful to emphasize pathetic photos of displaced women and children, the vast majority of the invaders are men, Muslim men. 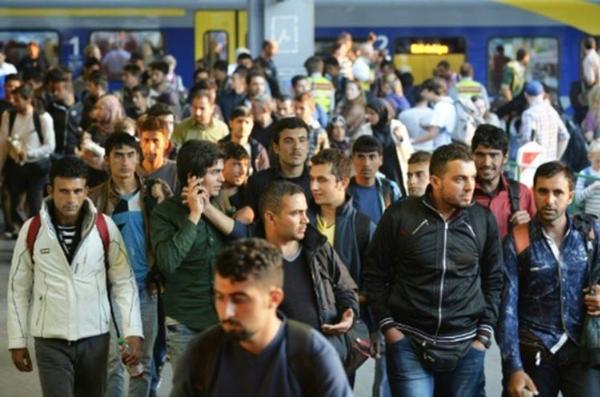 In lieu of actually accepting any asylum seekers, Saudi Arabia has offered to “help” Germany cope by building at least 200 mosques and said it would “build one mosque for every 100 Middle Eastern refugees who entered Germany.”

On New Year’s Eve 2015, the centre of Cologne was transformed into a war-zone as an estimated 1,000 male Muslim Arabs celebrated by launching fireworks into crowds and sexually assaulting German women caught up in the chaos.

Reports are emerging that up to 90 German women and girls have been raped by large gangs of Arab migrants in the early hours of last Friday morning.  Dozens more men have been assaulted and robbed.

One victim, 28 year old ‘Katja L’ spoke of her ordeal as she tried to make her way to the waiting room of Cologne railway station with two other girls and a boyfriend in the early hours of new year’s day.

She told Der Express – one of the largest regional newspapers:

“When we came out of the station, we were very surprised by the group that met us there”. She said the group was “exclusively young foreign men”. Keeping close to her friends, they pressed on:

“We then walked through this group of men. There was an alley through [the men] which we walked through. Suddenly I felt a hand on my buttocks, then on my breasts, in the end, I was groped everywhere. It was a nightmare. Although we shouted and beat them, the guys did not stop. I was desperate and think I was touched around 100 times in just 200 metres.

“Fortunately I wore a jacket and trousers. a skirt would probably have been torn away from me”.

As Katja L and other witnesses who have since come forward said, as they were molested by the gang the men were laughing and pulling their hair, and there were shouts of “ficki, ficki” (fucky fucky) hurled at them as they were called “sluts”. Treating her as “fair game”, there had been so many men groping at her Katja L said she would be unable to positively identify any of the perpetrators to the police.

Others were less lucky. One woman had her tights and underwear torn off by the crowd, and a police source quoted said there had been many “rapes” at the station that night.

So far, police have identified 80 victims of the gangs, 35 of which were subjected to sex attacks.

A press conference hosted by Cologne’s chief of police Wolfgang Albers this afternoon confirmed the attacks had been perpetrated by migrants, all of whom were found to be carrying official immigration paperwork by police officers at the time.

Mr. Albers said “the crimes have been committed by a group of people who mostly come from her in appearance from the North African and Arab countries”.

Meanwhile, on the same night local Germans in the provincial town of Schwabisch Gmund east to Stuttgart, (local population of 60,000) fire bombed a refugee hotel.  It is locals saying No More!

The incident was just one of the more than 220 across Germany during 2015. 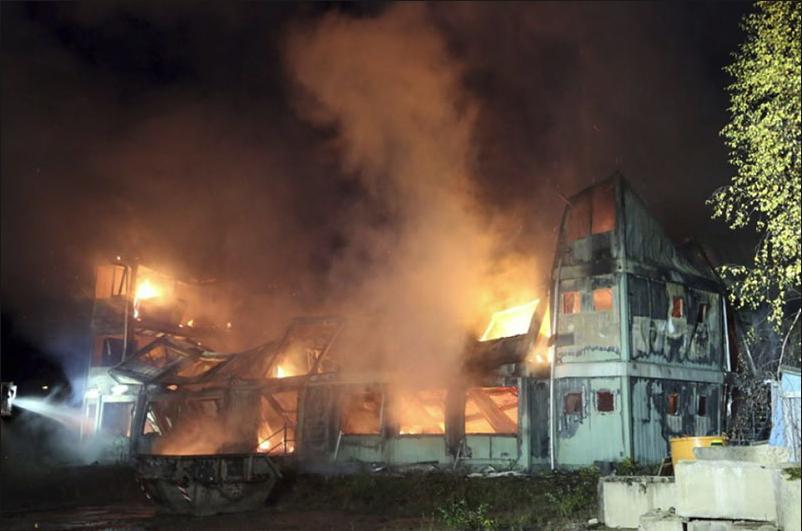 In neighbouring Switzerland, Swiss Armed Forces Lieutenant-General André Blattmann has issued a warning to the Swiss people that society is dangerously close to collapse and advised those not already armed as part of the Swiss Army reserve to take steps to arm themselves.

Blattmann has been head of the Armed Forces since, 1 March 2009 and his words carry very significant weight in a country in which several Citizens’ Initiative referenda against burqas and mosques have proven enormously popular as concerns grow about immigration and Islamisation.

In the last two World Wars, the Swiss combination of mountains and armed citizenry preserved the country’s peace and neutrality, but in the coming conflict, Switzerland already has its own massive fifth column.

Blattman warns, “The threat of terror is rising, hybrid wars are being fought around the globe; the economic outlook is gloomy and the resulting migration flows of displaced persons and refugees have assumed unforeseen dimensions.” 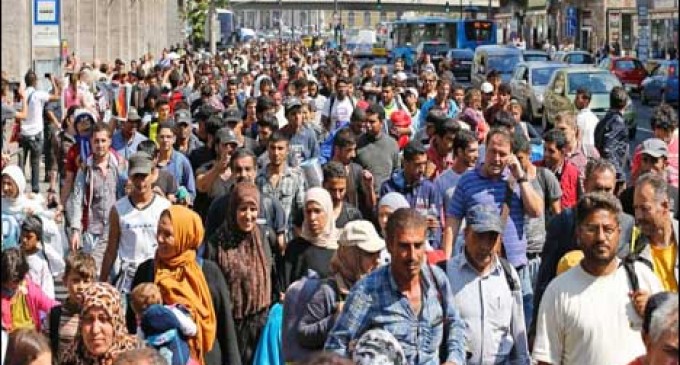 “Social unrest can not be ruled out”, the vocabulary in public discourse will “dangerously aggressive.  “The mixture is increasingly unappetizing” Blattmann sees the basis of Swiss prosperity and society, “has long been once again called into question.”

He recalls the situation around the two world wars in the last century and advises Switzerland, to arm themselves.

The Swiss Armed Forces have in the past held general manouvres in which the starting point was social unrest in neighbouring countries.

They, of course, include Germany, France and Austria, each of which face massive problems with immigration, Islamisation and elite repression of popular concern about what is going on.

The Lieutenant-General’s warning echoes that of Britain’s Rear Admiral Chris Parry in 2006, when he said that the combination of immigration and Islam would cause “a civilisational collapse on a par with the fall of the Roman Empire”.