The Eureka Flag was first flown by Diggers (White gold mining prospectors) on the Ballaarat goldfields at Bakery Hill on November 30 in 1854.

However, the use of the Southern Cross constellation design dates back to the National Colonial Flag of 1823, a mere 35 years after Australia’s foundation with the arrival of the First Fleet of convicts at Sydney Cove.   Designed by Captain John Bingle and Captain John Nicholson, both New South Wales residents, it is inspired by the White Ensign of the Royal Navy, the protector and defender of Australia from 1788 to 1913. 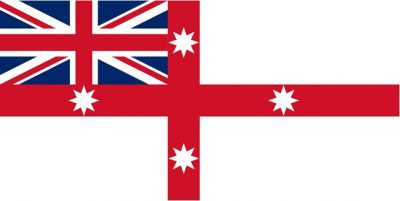 A sense of nationhood, distinct from old England, was brewing in the minds of the colonists from the very early days at Sydney Cove.

Significantly, the First Fleet of 11 sailing ships, while predominantly loaded with convicts to populate a new penal settlement on Terra Australis (preceding the Van Diemen’s Land penal colony of 1803), also transported free settlers as well as British Navy crew and marines and their families.   This was a new life in the antipodes and they were not going back to Portsmouth.  As estimated 1530 cohort had departed Portsmouth with a breakdown of 775 convicts, 323 ships’ crews, 247 marines, 60 wives and children, and 15 officials and free settlers documented. Some 47 perished at sea and 20 newborn were had.

Driven by famine and enforced pastoral clearances back in Britain, by 1849 the population of the combined colonies had reached 373,000, and comprised many more free settlers than convicts.  The sense of nationhood drove a desire to end the transportation of convicts from Britain and The Australian Anti-Transportation League was formed to lobby this cause.

Adopting a flag representing the Southern Cross regarded as the emblem of our southern hemisphere, The Australian Anti-Transportation League Flag is the oldest known flag to feature a representation of the Southern Cross with the stars arranged as they are seen in the sky.

On to it:  The Australian Anti-Transportation League Flag of 1849

The flag was designed in 1849 by Reverend John West of Launceston, Tasmania, and from 1851 was used by the Australian Anti-Transportation League in the Australian colonies and in New Zealand. The flag is based on the blue ensign — blue background with the Union Flag in the Canton — and has gold or yellow stars of the Southern Cross on the fly. Each of the stars of the Southern Cross was symbolic of a member colony. There is a white border around three sides of the flag, which was used to display the name of the League, the year it was established and the name of the colony where it was flown.

The League succeeded when in 1853 the penal servitude act was passed, and finally on on January 9, 1868, the last ship to transport convicts from the United Kingdom of Great Britain to the colonies, The Hougoumont, docked in Fremantle.

The burgeoning wool trade from the 1840s especially in inland New South Wales, Victoria an South Australia drove a need for inland transportation from farming districts to ports for export.  In 1829, explorer Charles Sturt had voyaged down the Murray River, recording that the river was navigable by vessels much larger than his whaleboat. He also considered the Darling River navigable.

The Murray River League was formed by South Australian farmer Robert Winter Beddome in 1850 and around that time variations of the Murray River Flag were designed.  In 1853, Francis Cadell first successfully brought his paddlesteamer the PS Lady Augusta through the Murray Mouth at Goolwa.

That same year paddlesteamer the PS Mary Ann became the first trading vessel to steam to Goolwa to obtain a Customs clearance for her cargo to ply the Murray. This sparked river navigation trade by paddlesteamers and barges plying the waters of the Murray-Darling river system.to transport wool bales, wheat and other pastoral goods and supplies to and from farming districts. 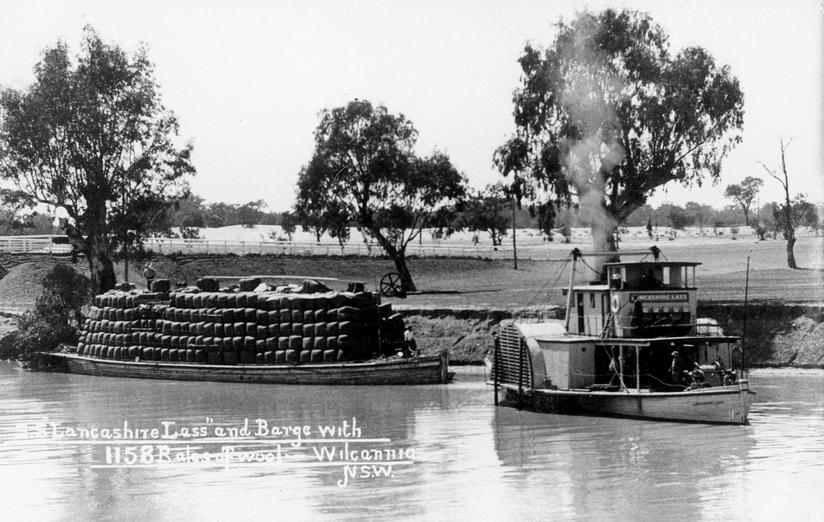 Navigable rivers included the Murray up to Albury and the three major rivers that run into it: the Murrumbidgee, Lachlan and the Darling as far up as Walgett. 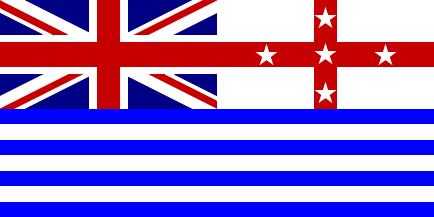 The design bears a strong resemblance to other Australian flags of the 19th Century, such as the Australian Federation Flag and the National Colonial Flag for Australia.  The flag has a white field. The Union Flag is linked to the red cross of St George (Flag of England), with the Southern Cross constellation embedded represented by five five-pointed stars (pentagrams) with a white star at each extremity of the cross and one in the centre.   It is believed that the azure blue horizontal bars of equal width represent the Murray River and the three major rivers that run into it: the Murrumbidgee, Lachlan and the Darling.    The horizontal stripes were probably influenced by American Stars and Stripes flag since there were a lot of Yankees left over from the whaling days.

A competitive Victorian version was flown by Victorian based vessels. 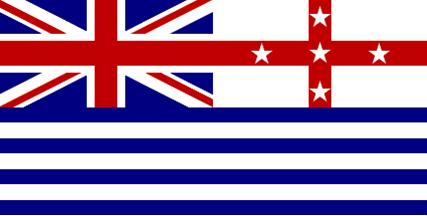 The only difference was the blue bars were navy blue instead of azure, representing the darker waters of the Murray River’s upper reaches.

A third later variant, the (combined) Murray Flag, was flown by vessels based on the upper reaches of the Murray in New South Wales, adopting the navy blue bars given that New South Wales was also upstream.

In this New South Wales version, the red cross of St George (Flag of England) extends across the full dimension of the flag’s field, rather than being confined to the upper fly of the flag as with the previous two.   With the horizontal bars thicker, this made the flag more prominent and distinguishable from the other two from a distance.

It is likely that the thicker bars represented that fact that in New South Wales the inland river trade extended beyond the Murray River to include the Murrumbidgee, Lachlan and the Darling- so hence the four thicker navy horizontal bars represent these four navigable rivers of trade into New South Wales.

Notably the five stars each have eight-points (an octagram) instead of five (pentagram).   The octagram star shapes are more Christian in connotation than the five-star pentagon.  Perhaps the influence of the octagon is more likely inspired from the National Colonial Flag of 1823, having been designed by New South Welshmen Captain John Bingle and Captain John Nicholson.

Predating the construction of railways, from 1853, river transport played a very important part in the economy and settlement of southern
and western New South Wales, northern Victoria, the Murray Valley in South Australia, and into southern Queensland.  The Murray, Murrumbidgee and Darling rivers provided important access to inland south-eastern Australia during the second half of the nineteenth and the beginning of the twentieth century.

The Eureka Flag was designed the following year in 1854.

by Dr Jim Saleam, for Cootamundra – For An Ideological Revolution

“In this 2019 election, the Murray River flag makes an appearance. A product of the days when we could ride a paddle wheeler from Albury to Central Queensland, the flag reminds us of a great past.

In the Water Wars now raging over Riverina we need to work to restore the great River system and halt the plundering of the Great Artesian Basin. As one symbol of Australia’s true heritage this flag deserves a new recognition. Alongside the Eureka flag let it become a symbol for popular resistance to the destruction of our communities.

Our campaign in Cootamundra may have sparked a new community interest in employing Aussie symbolism to advance urgent political debate.

We have received a few comments regarding our intention to employ the Murray River Flag in our campaign. It is noted there is a South Australian version of the flag and it may be most relevant for people there to give it a new airing. 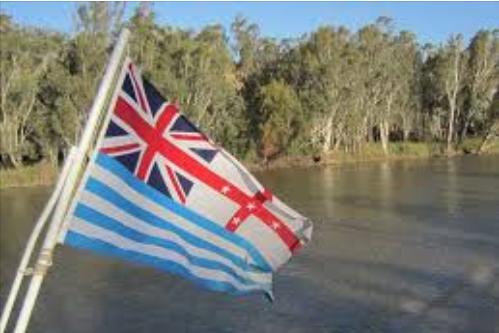 The Murray Darling Basis disaster affects four States and people’s struggle will be decisive in compelling even the minimum of government reaction and the prosecution and imprisonment of the guilty. 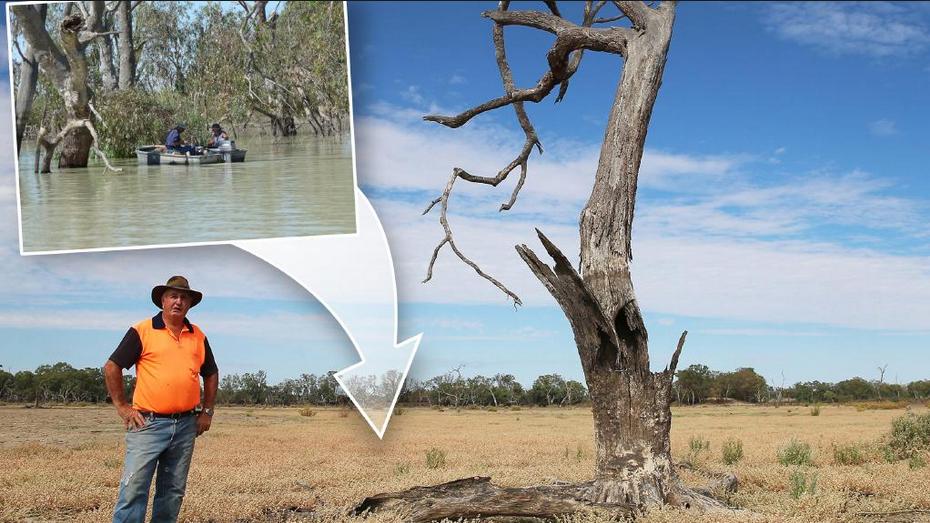 The Murray-Darling Basin Plan was signed into law by Federal Labor’s PM Julia Gillard and Environment Minister Tony Burke on November 22 2012.  It is one of Australia’s worst land management failures. Copies of the plan were publicly bonfired by local farmers quite rightly in 2011 and 2016. 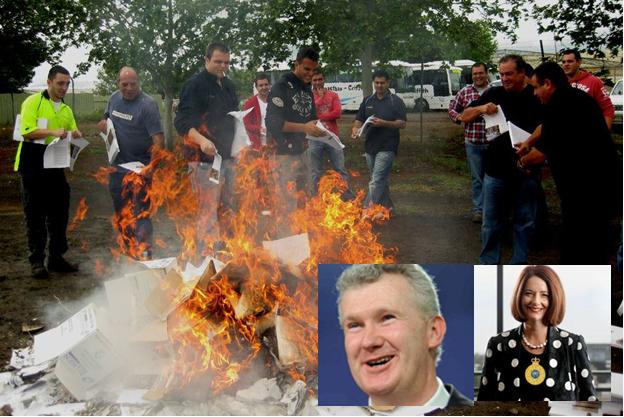 Labor are useless Burkes in the Bush