Today, twenty-five years ago, the Chinese communist dictatorship mass murdered thousands of its own chinese students in Tiananmen Square 1989 just because they chose to democratically mourn and protest against the government’s assassination of liberal reformer Hu Yaobang. Chinese dictator Deng Xiaoping declared martial law on May 20, 1989 and mobilised 300,000 chinese troops to kill chinese students.  So China’s regime is no different to North Korea.  He hated and slaughtered his own chinese like did Mao Zedong, and had the same dress sense and crap haircut.

Liberals like Barnett, Hawke, Rudd, Whitlam and Abbott have chosen to appease dictatorships in our region (China, Indonesia, Sri Lanka, Cambodia, Thailand) no differently to how German Nazis were appeased up until 1939.

The more ill will that Clive Palmer chucks at the arrogant bullies in China the better. Chinese communist imperialists think they own the South China Sea and that they can intimidate regional nations that have shores on the South China Sea.   May be the South China Sea should be renamed, to remove the imperial ching-ego complex – perhaps to ‘Sea of the Humble Villager‘.  Chinese state ego has no bounds yet no legitimate basis. 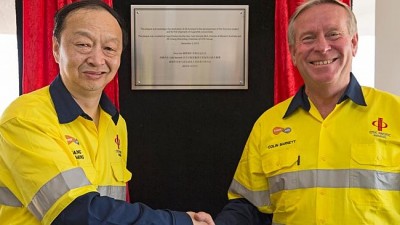 That China has been steadily encouraged by LibLab governments to become Australia’s largest trading partner, only exposes Australia’s import/export economy to have too many eggs in one asian nation economic basket.

But why should first world Australia keel over and dumb down to backward asian rules?  The concept of the “Asian Century” is 19th Century.  What Australian-bred woman could tolerate the sexist backward crap of an asian nation like China’s?

Instead, first world Australia should reflect on our hard-toiled world’s best practice and so demand that backward nations who we trade with emulate Australian standards and so allow their citizens to prosper, rather than just dumbing down decent Aussies.