With 8% of Sydney now chinese, nearly 300,000 strong, and with the LibLabs inviting influential chinese to represent them in government in favour of ordinary Australians, Packer’s casino phallus is sure to lure more of the ching fling and cast us asunder.

Under pro-chinese O’Farrell, it is only a matter of time before uberwealthy chinese immigrants dominate the shores of Sydney Harbour, outpricing Australia’s home grown wealthy.  Sydney risks becoming a Shanghai downunder, and Sydney estate agents are headlong into the ching market.    Industrial powerhouse China has amassed over 160 listed billionaires as identified in Forbes’ annual China Rich List this year, and Packer knows it.

Limp Liberal O’Farrell today rewarded fellow cardholder billionaire James Packer with his “humble” casino prize.  The prized phallus will stick out and up at Barangaroo, like another kitsch Macau casino.   In doing so, Yuan-driven Bazza, could have unwittingly historically sealed Sydney’s fate for a mass uberwealthy chinese influx and uncontrolled property buyout of Sydney property by the “Tuhao”, China’s new vulgar rich. 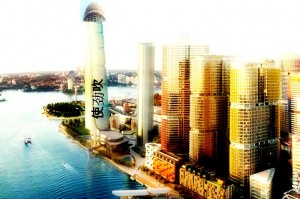 Packer’s ego architect clearly desires his Jørn Utzonship stamp on Sydney Harbour with phallic effect to out do Seidler’s Blues Point Tower iceblock of vomit across the water with more viagra you can poke a stick at.  Once this $1.3 billion iconic stiff is erect and open for stroking in late 2019, casino workers will be required to speak Mandarin.

This will exclude Australians and so more chinese imported on 457 visas no doubt.

Come down to Bangaroo for a good bang.

Greens criticism seems right for once.  Green’s John Kaye has criticised the Liberal government’s unsolicited proposals process as “anything but transparent and open”.

“NSW will now have another casino with more corruption pressures, more money laundering from Asian drug and prostitution cartels and more opportunities for problem gamblers,” he said.

LOL !! The Greens Kaye actually spoke the truth for once, this will be no more than a Chinese laundry for drug money.

Good ol’ Bazza, will someone please pass the Vaseline ?