Australia’s PM Tony Abbott and his Liberal Party’s current Northern Australia ‘White Paper’ is to ‘economise’ the northern half of our entire continent apparently just because it is less populated than the southern half of Australia.

Another Liberal policy smelling like a treacherous con against Australians.  Those living north of the Liberal’s arbitrary line of the Tropic of Capricorn, are part of the Liberal ‘White Paper’.  Indigenous Australians have already been bought out – “Simpler Land Arrangements to support Singaporean investment”

Abbott: “The north will only truly achieve its potential with asian multinationals and their cheap mass labour.”

The Liberals have no economic vision beyond population growth for Australia through mass immigration.  Mass asian migration into our so-called ‘northern zone’ is core Liberal agenda, like that of Labor. 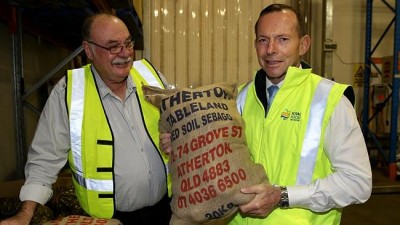 Big Multinational Business is coming, so get out of the way or go broke!

“Northern Australia can grasp its full potential and become an economic powerhouse within our great country.  This White Paper is an essential part of our plan to build a strong, prosperous economy and a safe, secure Australia. We can take advantage of our strengths and our natural advantages.

Our north’s future will come from its people, its ingenuity, its diversity, and its proximity to Asia.  Covering 40 per cent of Australia’s land mass, our north has the resources, the connections across the Tropics, and the land, skills and institutions that the Indo-Pacific region needs; a region that has the savings and the markets to drive northern prosperity.

Abbott’s financial carrot to Australians:  “We will fix the roads and telecommunications, build the dams and deliver the certainty that landholders and water users need.”

Abbott’s financial carrot to Singaporeans:  “We will drive down the costs of operating in the north for business; making it a more attractive place to invest and work. By making the right regulations and infrastructure investments, we can encourage jobs and tackle the costs of living far from major cities.”

Governments alone cannot develop northern Australia, they can only set the right environment for (Asian multinational) businesses to profitably invest and communities to flourish.” 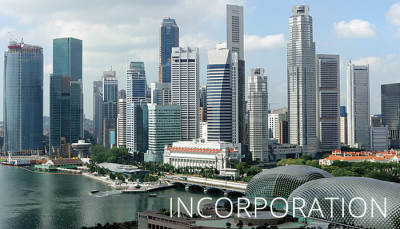 Singapore is rich but is bursting at the seams. Darwin is the target for asian high rise like Sydney CBD Haymarket

So there is the short intro spin to sell Abbott’s planned economic overdue infrastructure investment boon to northern Australian communities.

Crap!  It is a mass half-continental sell-off of Australian land sovereignty to wealthy asian multinationals.

Australians outside the capital cities have long been neglected decent and fair infrastructure from government like in the southern states and around Brisbane.  So the lure to remote and northern Australians is Abbott is finally here to invest in decades overdue massive infrastructure programmes.  Yeh great, when we see it!

But the catch is that Abbott’s multi-billion promise to spend taxpayer wealth is not to recognise, underpin, support remote Aussies, but to invite asian multinationals to buy you lot out and bring in their own.

It’s nothing but Abbott’s deceptive Jaundicing of Northern Australia. 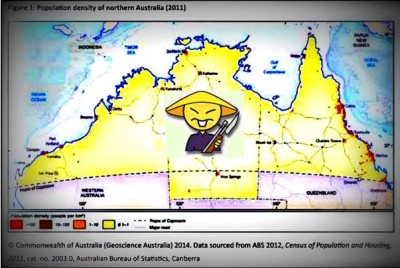 We can bring in cheaper labour rates than you Aussies

Abbott:  “We will fix the roads and telecommunications, build the dams and deliver the certainty that landholders and water users need.”