Apparently, so-called “refugees” or “asylum seekers” are role models who deserve to live freely in the Australian community.

That is why thousands of the lovely lads from Iran, Iraq, Afghanistan and Pakistan (aka the Middle East, aka mainly Muslims) have been granted bridging visas by the Rudd-Gillard Labor government 2007-2013.

Typically, so-called “refugees” have paid good coin to people smugglers in Iraq or wherever to fly to mainly to Malaysia/Indonesia and then to charter a fishing boat down to the Indonesian island of Roti before that last dash across to Australia – a 140km overnight leg to Ashmore Reef in Australian territorial waters. 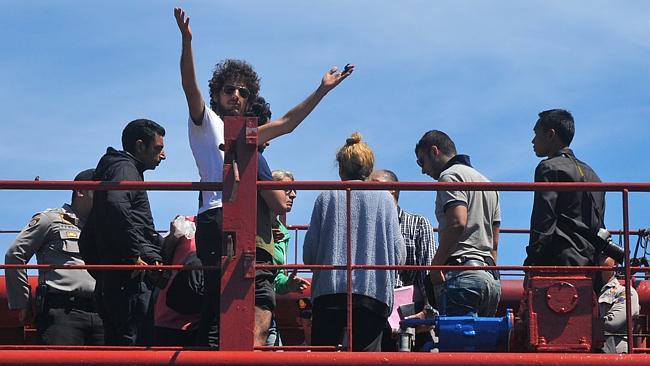 Voilà!  So where’s the welcoming party?  No docs, trust us.

So many of these quiet and considered young men have been granted protection visas and supported by refugee advocates like the Australian Homestay Network.  These so-called “refugees” are accommodated by good Samaritans in the Australian community usually converting a garage into a bedroom and living space.

It’s all about Australia being a good global citizen and building understanding, respect and trust for these poor lads fleeing apparent persecution.  Crap, there here for the Aussie goodlife to join their fellow illegals.

With the support of groups like the Multicultural Development Association and The Refugee Council of Australia, they get hostel accommodation, assigned a case worker, a  Medicare card, bank account and other administrative tools that the average Australian uses daily.

But since the Liberal Party stopped the boats, CEO of Refugee Council of Australia claims 2014 is the worst time to be an asylum seeker in Australian history. 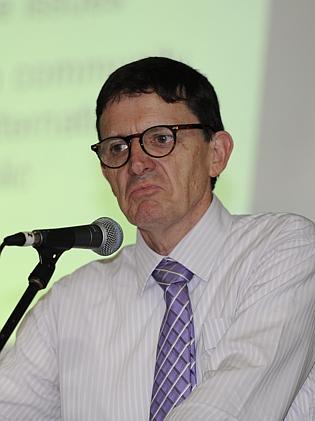 Not happy.  Paul Power, CEO of the Refugee Council of Australia spoke at a forum organised by Marrickville Multicultural Interagency on World Refugee Day, June 20, 2014.

“We’ve had just over 50,000 boat arrivals over the last five years, which is the greatest number in Australian history but at the same time we’ve had something like 1.125 million migrants get permanent residency in Australia,” he said.   “So even if all of these 50,000 had been given permanent residency – which they haven’t – they would still represent less than five per cent of the average annual migration intake.”

But now he’s pissed off about Immigration Minister Scott Morrison stopping the boats (his clients), about all the political vilification towards refugees and about the government cutting his taxpayer funding for refugees by 25 per cent.

Nearby, Bethlehem College Ashfield students held a half-hour strike every day at lunchtime in protest against the Federal Government’s mandatory detention of refugees.  The school’s Refugee Week initiatives co-ordinator Leah Sakr said the students wanted to highlight the trauma of keeping children and refugee families in detention centres.

“We have been passionate about the plight of refugees for some time now and the students said they wanted to learn more about the refugee experience.” she said.

About 50 schoolgirls taped their mouths shut last week in a symbolic show of support for asylum seekers who have sewn their lips closed in protest against their continued detention. 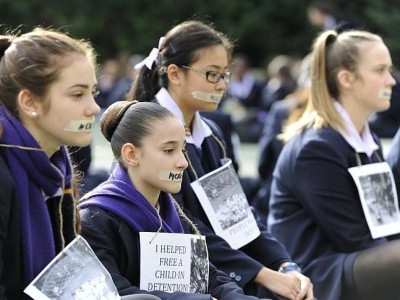 Bethlehem College students at Ashfield, Sydney sit in marked squares with numbered masking tape on their mouths to raise awareness of the issues faced by asylum seekers.

Poor naive young ladies.  They haven’t read about the plight of Afghan refugee Mohammad Salem Nazari (33) who just two months prior was sentenced to 14 months gaol in Burwood Local Court after pleading guilty to seven charges of indecently assaulting girls aged between 14 and 18 in a swimming pool at Sydney Olympic Park.

On December 8, 2013, Nazari felt up the young girls inside the water touching their breasts, bottoms, thighs, stroking one girl’s genitals and grabbing another girl’s leg. On several occasions he was seen smiling at the teenagers after the groping incidents. 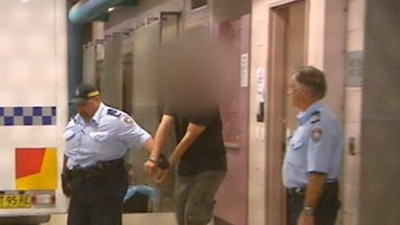 In sentencing the father-of-five, Magistrate Brian Williams said there was a “significant difference of lifestyle” between Australia and Afghanistan but he should know that his actions were against the law in Australia and therefore this country’s criminal justice system would be used to punish him.  Nazari is to be deported as soon as he’s served his sentence.

Nazari, who had been in Australia for six months, was the 31st asylum seeker facing criminal charges to have his bridging visa cancelled under new federal government rules.

Poor lad.  He had so much future to look forward to in Australia.

Previously,in Sydney’s eastern suburb of Randwick in October 2013, a Pakistani ‘refugee’ assaulted and attempted to kidnap two women after they refused to have sex with him for money.

Musarit Hussain (25) overstayed his bridging visa and went “looking for vulnerable females late at night…to exploit them for sexual gratification”.

When the woman refused the man allegedly kept driving, ignoring her screams for help.  The woman tried to escape from the car, but Hussain allegedly reached across her and locked the door.

Some distance further down the road, as the man allegedly began unbuttoning his pants, the woman managed to unlock the car door and jump out.   As the man allegedly tried to drag her back into the car, the woman screamed for help, alerting a couple who lived in a unit block nearby, and helped her escape to safety.

Police say the second incident occurred in the early hours of Saturday when Hussain allegedly pulled up alongside a 20-year-old woman at Randwick and got out of the car.

After opening his passenger door, he allegedly asked the woman “can I help you” and put his passenger seat down.   When the woman began to run, Hussain allegedly grabbed her by the arm and dragged her into the car.   At the same moment, a taxi with three passengers that was driving by stopped and came to the woman’s assistance.

When Hussain was arrested at 9am the next day and charged with attempted kidnapping and assault occasioning actual bodily harm.

Then there’s the case of Iranian refugee, Amir Mohebbifar (27) who yesterday pleaded guilty to aggravated rape of 19-year-old woman on Sydney’s Anzac Bridge on January 16, 2014.

Amir, poor soul, was on a bridging visa after arriving by boat to Christmas Island in March 2013, but the visa had just expired.

The university educated Mohebbifar, who came from a good middle class Iranian family, told a psychologist in Iran western women were “portrayed as whores” and he was depressed because he had been unable to make friends in Sydney.

Judge Donna Woodburne said Mohebbifar preyed on a vulnerable young woman who was simply trying to get home.  The 19-year-old woman, who cannot be named, was walking along the bridge with headphones at about 2am on January 16 when she was approached by Amir Mohebbifar.  Mohebbifar dragged the woman on Sydney’s Anzac Bridge into bushes, and shoved two fingers into the victim’s vagina and “pushed hard” so it would have been “sheer terror” for the woman.

After the attack, the teenager immediately called triple-zero, prompting the attacker to run.   Using CCTV footage, within an hour police later found Mohebbifar hiding under a car.  The woman was taken to hospital for treatment and her DNA was found under the attacker’s fingernails.

Police later found the attacker within an hour hiding under a car.  Mohebbifar was sentenced to an eight year jail term with non-parole period of six years.  As soon as his sentence is served, the refugee is set to be deported back to where he came from. 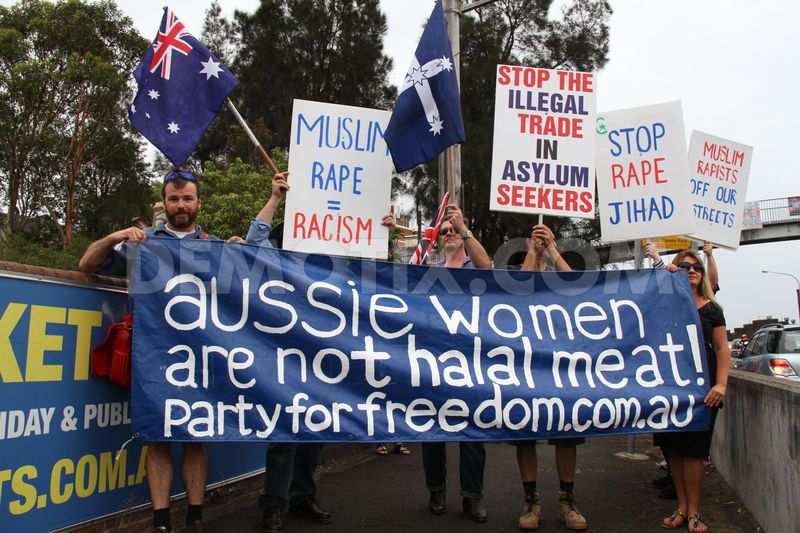 Australians protest near the scene where the 19-year-old woman was sexually assaulted by the refugee.

The Refugee Council of Australia has said nothing.  Such truths taint their cause.

Humanitarian and former governor-general William Deane has said that Australians lack empathy for the plight of asylum seekers.  He has asked Australians to have more understanding and compassion towards them. 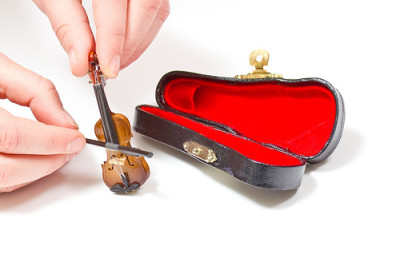