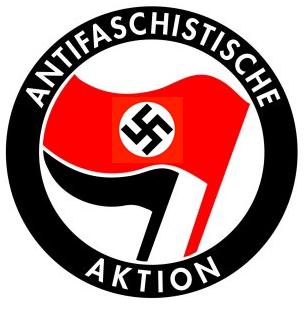 Antifa is a collection of misfits, who aspire to social anarchy Communism and Left Wing fundamentalism. The term ‘Antifa’ supposedly is short for Anti-Fascist, but fascism died out with the German, Italian and Spanish facists in World War II, so are they living in the past?

Antifa is a dangerous social anarchist collection of fundamentalists who condemn all private property ownership and who seek “free association of people living together and cooperating in free communities”.

In Australia, read who their friends are!

These are the idealistic types who see the world as a global village, who aspire to forcing everyone to live in communes (like Pol Pot’s Kmer Rouge) and who encourage mass immigration for as many foreigners as possible to come and live in Australia.

‘Anti-facism’ is just a term to attract anyone who dislikes racism which is just about anyone! It is about as obvious as a term ‘anti-racism’.

Antifa thus has become a cult, attracting vulnerable and impressionable members of our society to join their bizarre anarchic cause.

Antifa claims its goals are:

They probably have immigration offices and agents in most poor and third world countries processing applications for Australian immigration!

More OneWorldist extremists to watch out for.