Guthrie’s obsession against US President Donald Trump has reached disturbing proportions. That’s what Planet America is all about: Trump Hate.  It’s her personal out, her vendetta, and as ABC staffer, you better be on the same side, especially if you have an urban mortgage. 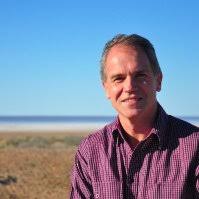 Next for da urban axe:  ‘Landline’, just like ‘Back Roads’.

Instead, sign of things to come… Planet American rates at Network 10 standards. 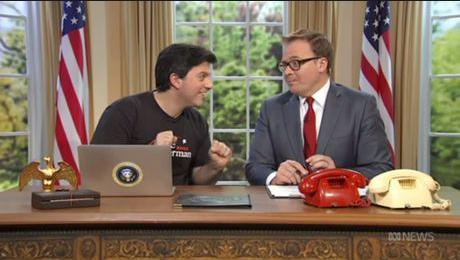 ABC news and almost half of the 7:30 Report are either Trump hate fixated, else plugging leftist causes like deviant marriage, climate alarmism, multicultism, the plight of fake refugees and their QCs or whatever the Greens-Labor despatch box has delivered from the Canberra press gallery.

Otherwise it’s all copy paste from Trough Woman’s leftard counterparts in the US, Al Jazeera, useful university idiots or else conveniently “unknown sources”. 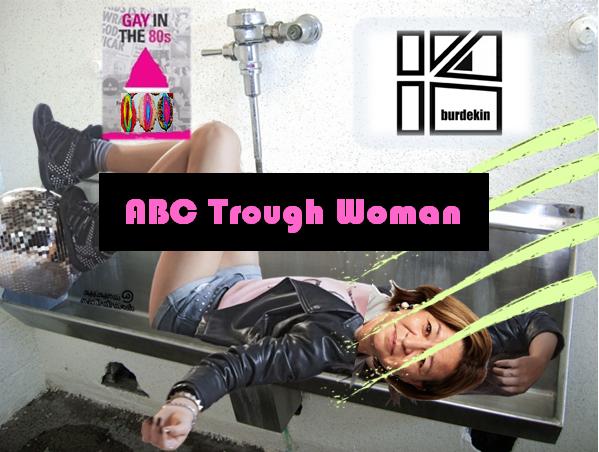 Guthrism – taking national broadcasting into the gutter, like Network 10

Guthrism’s anti-Trump bias is relentless in ya face:

We think she may buy Network 10’s The Project because it’s got muzzie social media sensation Waleed Aly.  Guthrism has programmatic leanings toward Network 10 – Australia’s poorly educated extreme youth focus, thanks to education denial by the leftard Australian Education Union. The board must “ensure that the gathering and presentation … of news and information is accurate and impartial according to the recognised standards of objective journalism”.

‘One third of the news on Wednesday and almost half of the 7.30 Report were given over to interviews with both American politicians and Australian “experts” relating to allegations of security breaches by Donald Trump. The ABC interviewer asked leading questions about the credibility and trustworthiness of the President.’

The genius of Trump is how he manipulates fools in the media to his own ends. During last year’s presidential campaign, mainstream media’s “get Trump” coverage backfired badly. The more the media dumped on Trump, the more coverage it gave him and the more it helped Trump win the presidency — not just with free airtime, estimated to be worth $US2 billion, but by feeding Trump’s message of a biased media. It’s the same now. Trump goes after the “fake news” media because he can and because it works. Trump speaks directly to his 34 million Twitter followers without being filtered by the media. This drives the media nuts, as it can’t game the system the same way.

As The New York Post’s Michael Goodwin said during a speech a few months ago, while leftard politics were baked into the journalism cake decades ago during the social revolution of the 1960s and 70s, what happened last year was something altogether worse.

“As with grief, there were several stages” in journalists’ coverage of Trump, he said. They started out treating him like a joke, then, when Trump won the GOP nomination, the media got angry, especially because his battle with the media aided and abetted his rise. Since he won the presidency, the media has tried to get even, calling for Trump’s impeachment absent hard evidence. Having helped create the celebrity who became a president, the media seems to imagine it can bring him down too.

Trump’s message resonates because the media’s anti-Trump bias is still evident.   The polls are just another form of propaganda which cannot be taken seriously.   Look how the polls predicted a Clinton presidential victory of 65% – of course is you only survey rusted on Democrat members. No wonder many Australians want the ABC to be more accountable.  Independent Senator David Leyonhjelm says the ABC delinquently ignores its charter to be ‘fair and balanced’, so questions what more rules will achieve.

Guthrie says the public interest is what the ABC thinks is good for the public.  The proposed changes won’t “improve” the ABC’s leftist agenda to show most Australians are straight white, racist, homophobes.

Guthrie praises the ABC for its diversity (anything non-White and anti-Australian).

“That’s why Spigelman recruited me from Singapore on a 457 visa.” Not rose-coloured glasses:  she’s got strabismus syndrome of the left eye.

No wonder.  So will she claim the NDIS?

The ABC is meant by law to be political impartial. But Guthrie has encouraged the vilification against crusade against Trump.   This is unprofessional and confirms the ABC is not only biased but that bias is encouraged from the very top.

ABC managing director Michelle Guthrie has described Donald Trump’s shock US election win as a “bruising experience for women everywhere”…”We need to consider what it means when Mr Trump, a candidate whose views on women are so well-known in the public space, can defeat Hillary Clinton – not just the first woman endorsed by a major party to run for president, but who is also one of the most qualified candidates in US history,” she said. Former ABC Journalist of 26 years, Geoffrey Luck observes Guthrism in action, in charge of the asylum:

‘That the ABC is Fake News is not new. What’s new is that the ABC’s fakery is now entrenched. Unashamedly and blatantly, Australia’s largest news-gathering and publishing organization lies by omission, distorts by selection and excludes inconvenient truths. ABC News is now the mouthpiece of a progressivist, sentimentalised cadre of activists dedicated to the destruction of the pillars of Western society – free speech, modern history and Christianity. Its reporting of events unfolding around the world feed audiences a deliberately blinkered, but subversively coloured interpretation.

Exhibit 1: Last week’s coverage of the attack on pedestrians in Barcelona. The ABC sent two senior reporters from London to cover the aftermath of the atrocity. Over several days they managed to avoid mentioning the ideology energizing the perpetrators.
Ten hours after ISIS had claimed responsibility for running down men, women and children with a truck, the ABC’s 7pm TV news bulletin aired this exchange:

News anchor Jeremy Fernandez: “What more do we know about who carried out this attack?”

Senior reporter James Glenday: “Police are focusing on the 17-year-old driver of the van, but they believed that as many as eight people have been involved in the planning of the attack here.”

A deliberate avoidance of the direct question.

This refusal to call out Islamic terrorists, ISIS, the Caliphate or other extreme muslims is now endemic. Ever since the first Paris attacks, when correspondents Barbara Miller and Lisa Millar danced cleverly around the question of responsibility, ABC News has worked hard to avoid naming Islam. When challenged, denial has been based on early uncertainties: the lack of official confirmation, or the possible confusion of local political issues. Often, social deprivation, unemployment and racism have been blamed for atrocities.

Exhibit 2: The Charlottsville riot was a heaven-sent event with which to beat the Alt-Right. And when President Trump dared to suggest that there was violence from both sides in the streets, he gave new cause to attack his “white supremacy”. So we were served by the ABC with replays of the mother of Heather Heyer, killed in a deliberate car crash: “She went to the demonstration to make the world a better place.” This sanctimonious gush encapsulates the ABC’s policy of replacing facts with sentimentality.

Exhibit 3: And have we heard from our national broadcaster’s many North American correspondents the full story of the statues? This has been an Alt-Left campaign building for months, if not years, to remove all historical traces of the South’s part in the Civil War, its flag and its champions. Ignoring the incitement of the hard-left Southern Poverty Law Centre, the ABC has deliberately characterized the events as an upsurge of Nazism and white supremacy.

The facts: After years of argument, the Charlottesville Council voted in June to rename Lee Park (which contained the Robert E Lee statue) as Emancipation Park. A permit to hold a Unite the Right rally in Emancipation Park on August 12 was first granted by the city, then revoked on August 7. On August 9, the city granted two permits for counter-protests to the Peoples Action for Racial Justice, to be held only a mile away.

On August 11, a U.S. District Court judge granted the “Unite the Right” organisers injunctive relief – permission to hold their rally, on freedom of speech grounds. Judge Conrad ruled that the City had no legal right to prohibit the rally on the basis of “content” – i.e. because it feared what might be said. The stage was set for two opposing groups to confront each other.

Before that could happen, and twenty minutes before the Emancipation Park rally was to start, Virginia’s governor declared it an unlawful assembly. He made no such declaration on the two protest rallies. Those at the park were expelled into the streets where they were confronted by the counter-demonstrators. Virginia national guardsmen and state police stood by and watched.

Exhibit 4: The ABC’s Aboriginal propagandist, Stan Grant, has now picked up the torch from his American anti-statue heroes. He has taken aim at the James Cook statue in Sydney’s Hyde Park, objecting to the inscription saying “Cook discovered this territory.”

Grant’s unsubtle stirring divides Australia by perpetrating the myth of Aboriginal cultural equality. He dares not admit that, for the civilised world, Australia and its stone-age inhabitants simply did not exist. He will not acknowledge that, as the skilled navigator mapped the east coast of Australia, he was meeting nomadic peoples who culturally, socially, economically and technologically had merely marked time for fifty thousand years.

In his column on the ABC website, Grant reports that some indigenous people would like to see the Cook statue removed, but he disagrees.

Nevertheless his comments are incendiary:

“Americans are tearing down the monuments to hate, but we remain oblivious to ours.”

The fierce protestations of the Alt-Left in America will soon be replicated here by those who do not care for the civilisation that British colonisation brought. The ungrateful spites like Grant pick away at symbols such as Australia Day now, but they are not far from tearing at the deeper foundations of our modern society. Grant’s spurious call for an end to what he terms the “great silence” about our indigenous history is merely self-promotion, via a coded call for hate.

Good work if you can get it — and, until the national broadcaster is reformed, the ABC will make sure those who promote the messages of which it approves are never unemployed.’

The comrades running the ABC preach their marxism, warmism, deviance, Trump hatred until their little post truth hearts are content – black is white and down is up.

So, on Monday night watch the ABC bias unfold as the 4 Corners programme becomes a pro-Hillary mouthpiece.