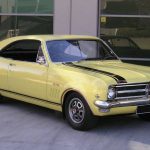 Holden is gone, much to the indifference of General Motors, who only kept it around because it was paid for by government handouts.

Being a Yank mob, primarily responsible for such beaut gas-guzzlers as the Buick, Cadillac and Chevrolet, their management was never likely to be bothered by any social impact closing Holden might have. After all, they are quartered in the post-apocalyptic city of Detroit. And this is business.