What goes around comes around. Urban Australians have been conned by a Chinese in Singapore with local leftie support.

Yet another leftie scheme ‘eco-bike sharing’ appeared on the scene with the lure of borrowing bikes to get around promoted as ‘free’.

Suddenly thousands of ‘obikes’ appeared out of nowhere around congested Melbourne, Brisbane, Sydney and the Gold Coast.  Of course they were yellow; they were Chinese.  The oBike scheme was set up by uni dropouts Edward Chen (his Anglicised name) and Shi Yi out of Singapore in 2016.  This is Shi Yi with his alzheimers Singaporean sugar daddy, sucking up elder abuse. 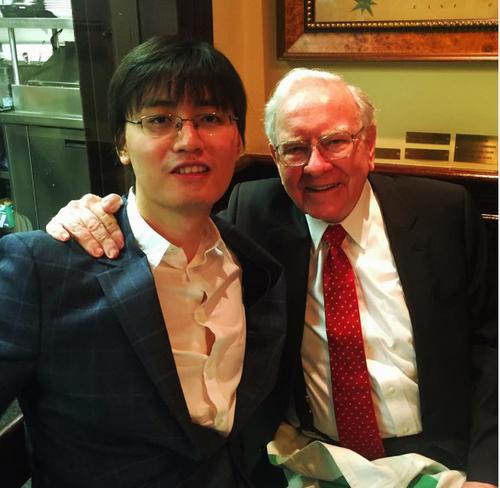 In typical Chinese style, oBike copied others.   Bike share scammer ‘Ofo‘ set up in 2014 by Dai Wei (his real name) out of Beijing.  ‘Mobike‘ was set up by Hu Weiwei (yep, his real name) in 2015, again out of  Beijing.  Then along comes oBike in 2016 and then last year ‘Reddy Go‘ was set up by Donald Tang (another Chinese) in 2017. He’s from Beijing too, but backdoor migrated to Sydney on a dodgy student visa who paid good yuan cash to the University of Technology to do IT.   He copied exam papers and then got Beijing smart-phone app developer Elex-Tech (in Beijing) to copy software for his Reddy Go smartphone app to take deposits and access his share bikes.

They all copied Frenchman Jean-Claude Decaux of JCDecaux who conceived the business idea of using street furniture as advertising back in 1964 and first introduced his bike sharing business model to Australia in Brisbane in October 2010.  But his business CityCycle has cost the Brisbane council $13 million since.  Former Brisbane city mayor Campbell Newman was conned to provide 40 docking stations for 500 share bikes. 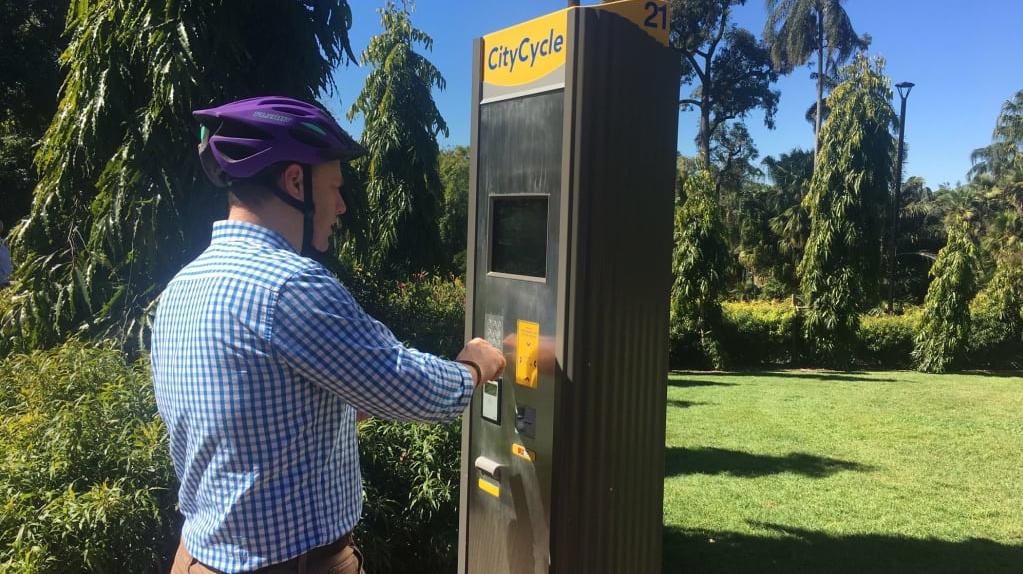 Since then the Chinese have copied and have invaded with thousands of cheap bikes all made in China (all copied from European designs of course) arriving in hundreds of shipping containers into Australian ports and dumped on to the streets.  They choked footpaths, driveways, train stations, bus stops and roads in has morphed into anarcho-share bike dumping.

Anything free and the lefties are hooked.  The bikes lights are even powered by a solar panel, so Greenie-lefties became enraptured.

But ‘free’ came with a catch – a deposit online to a Chinese bank account for the privilege of using them for ‘free’.

oBike boasted: “There was a total of 230,004,402 kilograms of carbon footprints reduced and more than 17 million calories burned.”

(The carbon footprint of manufacturing the bikes in China?)

Lefties lapped it up as the new black.  Sydney’s Mayor Clover More, a muesli munching, queer hugging leftie spent $76 million of ratepayers money on bike lanes.  Not her money. 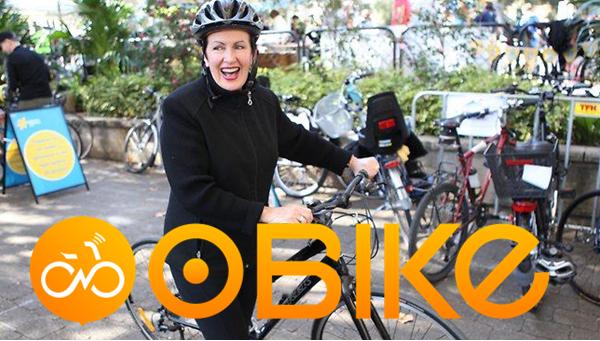 It has created traffic chaos in Sydney’s CBD as her ideologically green-coloured bike lanes have replaced vital traffic lanes in the CBD and removed valuable street parking for shoppers, tradies, trucks and vans alike.  Yet the bike lanes are always empty because they go nowhere. It was a leftie scheme driven by ideologue.

Clover reckoned bike sharing was the bees knees; that dockless bike services could supersede the need to roll out any need for an organised docking system for thousands of these ‘free’ bikes.  “Just leave them anywhere.” Clover decreed in true anarchist style.

“Ban the car!  Free bikes are here to stay!” they cheered. 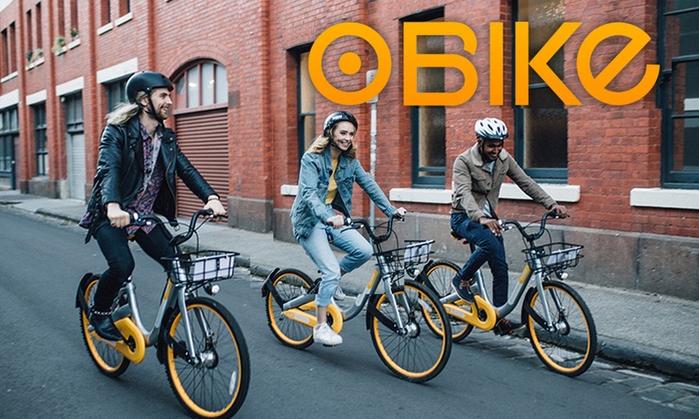 And they’re even multicultural like this promo image shows with the token darkie!

Bike Sydney president David Borella, a leftie, said be believed the bike-sharing scheme would succeed, and appeal in particular to tourists. “It really is door-to-door travel. I think this will be a success because there is such a push for this,” he reckoned.

Confucius say:  “By three methods we may learn wisdom: First, by reflection, which is noblest; second, by imitation, which is easiest; and third by experience, which is the bitterest.”

But Greenies don’t read anymore.  They were never read to as children because fairy tales were banned by their PC deviant parents.  So the Greenies never learned about Puss in Boots, Br’er Rabbit, and of Jack and his Beanstalk – each classic fairy tale masters of trickery. 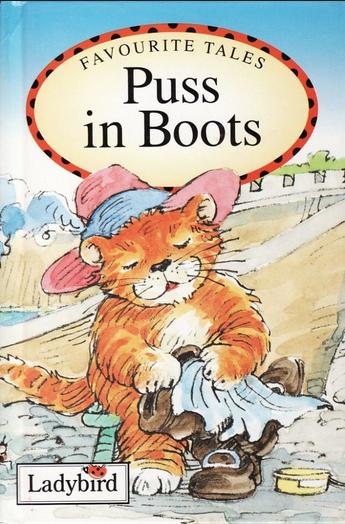 So the spin was a ‘dockless cycle-sharing service’, like the emperor with no clothes.

Donald Tang (his Anglicised name) promised: “We wouldn’t put too many bikes in one spot, otherwise it will block footpaths and driveways. That’s not good,” he said.  “It’s free-standing – no station is required, which means more convenience,” he said.

In reality of course docking stations for cost too much, upset his business model (aka his get rich quick scheme).

In Sydney, Clover Moore commissioned a study into providing docking stations for all these share bikes and estimated the cost of about 3100 bicycles and 632 docking stations to be about $25 million.   So she opted for the anarchist model instead, facilitating public nuisances.

“The whole purpose of this concept is to make people’s lives easier – not to make it harder.” Tang reckoned.

What helmets?  “Helmets are for squares” the Greenies bleat and calling for relaxation of laws for imagined ‘low-risk’ cycling, or what over a bong session they have contrived ‘free cycling’. 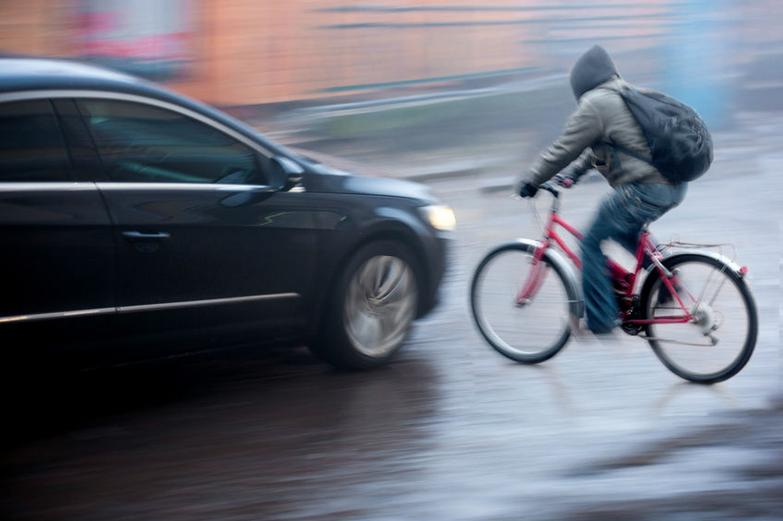 In reality, providing helmets would also upset the business model.

And so, the leftie bike users came in their thousands happily handing over their $69 cash deposit online to Chinese bank accounts ($99 for Reddy Go).

They happily discarded the bikes chaotically anywhere, littering city footpaths, driveways, gutters, public places, dumping them into rivers and even up trees just for kicks.  What environment? 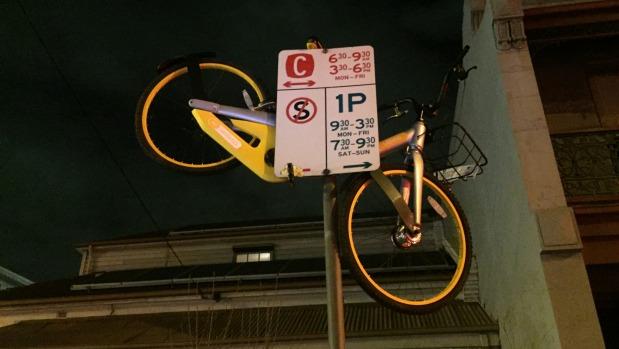 oBike reckoned that its bikes being being abandoned as rubbish, up trees, on roofs, in rivers were just “isolated incidents” else just a “teething issue”.  In Melbourne, the cool thing amongst the anarcho-vandal set is to chuck oBikes into the Yarra, and hanging them in tree branches is also all the rage. 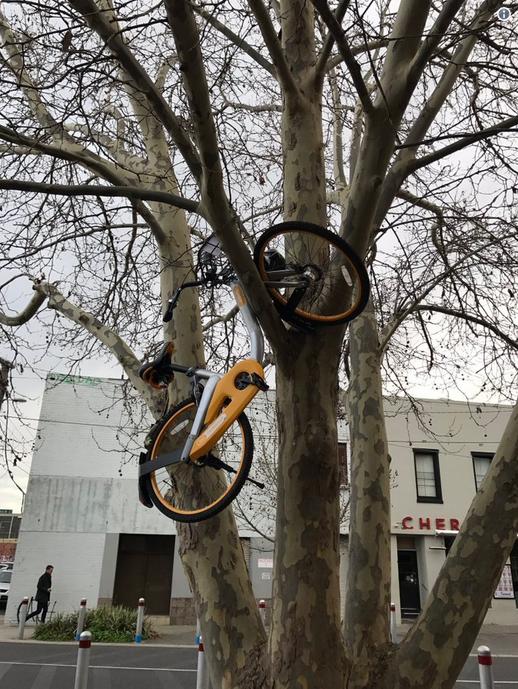 It was a Third World dumping model from the outset.  Local complaints by residents, commuters, and ratepayers about abandoned share bikes abounded – the nuisance, safety hazard, the visual pollution, public thoroughfares being used and abused. 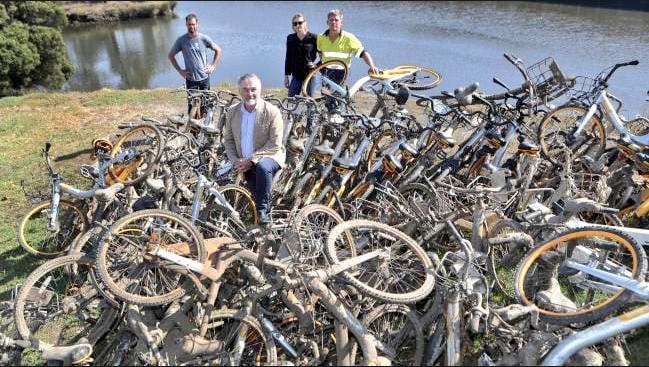 Just like in Beijing, but lefties never let truth get in the way of ideology . 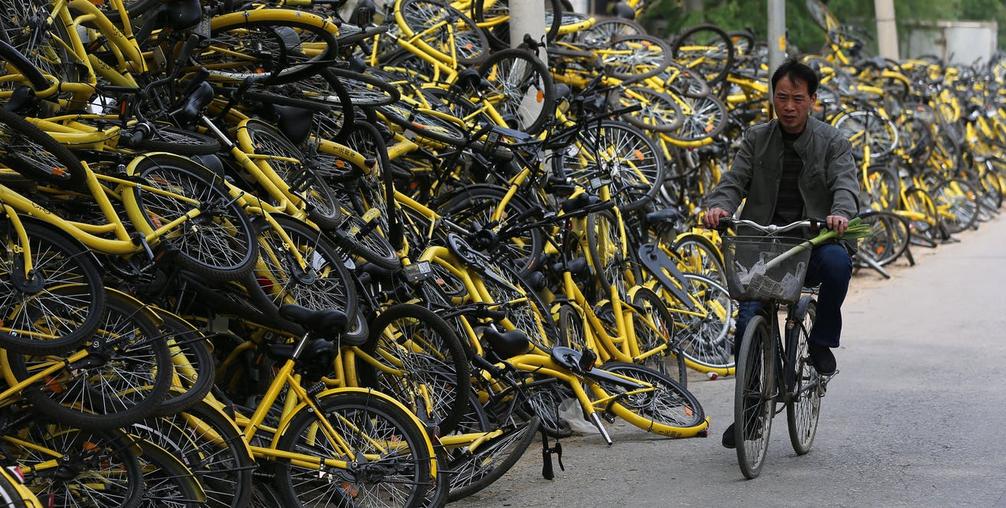 And then oBike founders Edward Chen and Shi Yi, having reaped $45 million from hundreds of thousands of $69 subscriptions, disappeared as quickly as they had appeared.  They’ve done a runner. oBike has disconnected its Australian customer service number and shut down email accounts.  It has gone into liquidation in Singapore and the refund button on the smartphone app as oddly vanished.

Boo hoo lefties.  You’ve been taken for a ride by Chinese.

Some 20,000 leftie subscribers in Sydney alone are frothing bad.  They were always a public nuisance. 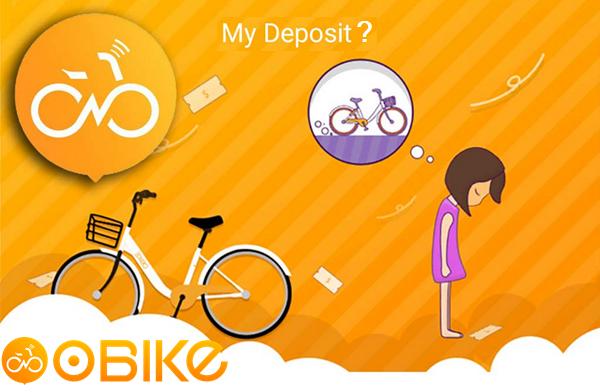