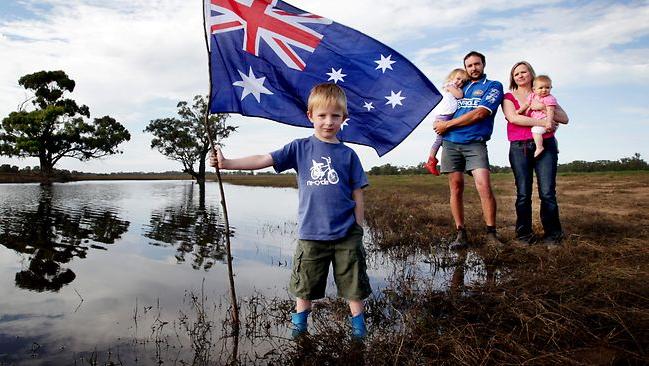 Australians are about ordinary Australians and their families living life in our lucky country.

Our white (Australian) Australia Policy traces its origins to the First Fleeters, to Settlers even before the 1950s Gold Rush.  Traditional Australians were here well before. We go back seven generations. We repelled the chinese then and we will now.

The Anti-Asiatic League was formed in Coolgardie just two years after gold was discovered in 1892 and there were also problems associated with competition between Afghan cameleers and European carters.

Similar race problems existed on the New South Wales goldfields as far back as the 1850s.

The White Australia Policy was one of the first enactments of the newly created Federal Government in 1901 and it remained in force until 1972, when Labor’s Gough Whitlam invited Vietnamese and imposed multiculturalism on Australians.

The 1901 legislation was enacted ‘to place certain restrictions on immigration and to provide for the removal from the Commonwealth of prohibited immigrants.’ 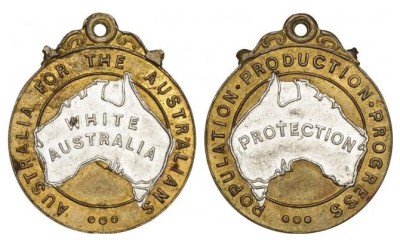 Prohibited immigrants included the insane, anyone likely to become a drain on public funds, prostitutes, criminals, those with an infectious disease, anyone who within three years of arrival who was convicted of a criminal offence and sentenced to 12 months or more and anyone ‘of a loathsome or dangerous character.’

The policy sought to restrict immigration from non-European countries with the use of a language test. The language test could be given in ANY European language and was 50 words long. The tests were administered by Australian Customs officers. Instructions given to the officers were secret but today we know they contained the following:

“All aboriginal inhabitants of Africa, Asia and Polynesia should be subjected to the test unless they come within the exceptions to Section 3, or are Pacific Island labourers, or are otherwise exempted. In the case of White Races, the test will be applied only under special circumstances. The passage for dictation is to be one of the set forwarded herewith and is to be changed according to the dates given.”

“The English Language will in general be adopted for the purpose of the test; but if in your opinion, the immigrant would, for reasons which you would be prepared to state, be an undesirable immigrant, it may be better to substitute for the English test, a passage from some other language. The choice of the language and of the passage will be left to your discretion. In every such case, a special report is to be furnished.”

The passages selected for the test were changed every fortnight to help stop rote learning. Following is one example of the type of passages that were used:

“We all call the lion king of the beasts, but compare the biggest maneless lion with the full-grown male tiger, and we see at once which is the mightier animal. The tiger does not look it, but he is really more terrible than the great maned lion. The lion looks, with his noble mane, as terrible as he is.”

Better still, get ’em to explain a random passage of Shakespeare or an excerpt out of James Joyce’s novel ‘Finnegans Wake’ such as:

“The fall (bababadalgharaghtakamminarronnkonnbronntonnerronn- tuonnthunntrovarrhounawnskawntoohoohoordenenthurnuk!) of a once wallstrait oldparr is retaled early in bed and later on life down through all christian minstrelsy. The great fall of the offwall entailed at such short notice the pftjschute of Finnegan, erse solid man, that the humptyhillhead of humself prumptly sends an unquiring one well to the west in quest of his tumptytumtoes: and their upturnpikepointandplace is at the knock out in the park where oranges have been laid to rust upon the green since devlinsfirst loved livvy.”

T’would slow the hordes to an acceptable trickle. 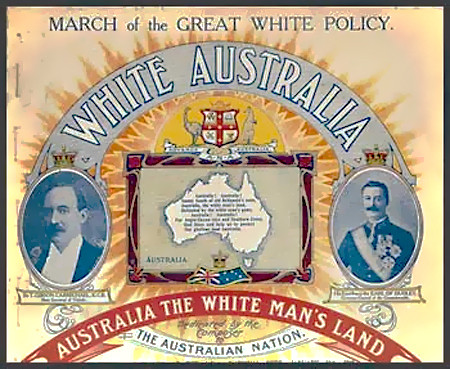 The first stages of the dismantling of this policy began with (then) Immigration Minister Harold Holt in 1949 when 800 non-European refugees were allowed to remain in Australia and Japanese ‘war brides’ were also allowed entry.

In 1957, non-European immigrants who had been in Australia for 15 years or more were eligible to become Australian citizens.

In 1958 the dictation test was removed and a simpler system of entry permits was established.

In 1959 Australians could sponsor Asian spouses for citizenship.

In 1966 a number of ‘temporary residents’ were allowed to remain in Australia indefinitely and after 5 years residence could gain citizenship.

The Whitlam Government in 1973 put a final end to the White Australia Policy by allowing any immigrant after three years residence to obtain citizenship and by putting in place measures to instruct immigration officials to disregard race when determining suitability for entry to Australia. Despite this non-European immigration did not really increase until the Fraser Government took office in 1975.

In 1975 the Racial Discrimination Act made it illegal to discriminate on the basis of race.

It has to be pointed out that Australia was not on its own when it came to restricting immigration based on race. Canada, USA, Britain, South Africa and New Zealand have all had similar racially based policies in the past.

Today around a quarter of the people residing in Australia were born overseas and 45% have at least one parent who was born overseas. The current Australian population originates from around 250 different countries and 200 different languages are spoken here. After English the next most common language in Australia is Italian.

In 2007, shortly before being soundly defeated at the general election, the Howard Government introduced tougher language tests and an Australian values test.

Then Rudd came to power and repeated Tony Blair’s mass invasion of 50,000+ Turd Worlders, and Australia has been suffering the social consequences ever since.