Australia is a free and democratic country where men and women are equal. People are expected to show respect for one another and not to abuse or threaten others.  At least that is the theory that liberals push.

Since the Australian Greens sided with the Labor Party under Rudd and Gillard to facilitate over 50,000 illegal migrants to invade Australia by prepaid chartered fishing boats (like below), the Liberal Government has since stopped the boats. 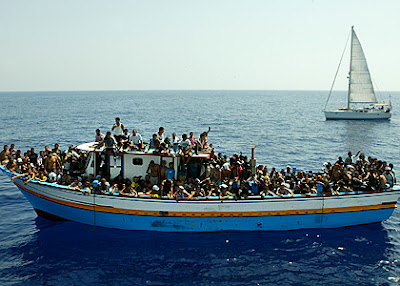 Of course, they now fly the planes.  And the plan is to increase the number of refugees.  The numbers slowly creep upwards.

The Liberals have also introduced a Code of Behaviour for the 50,000 asylum seekers who were largely let loose into the Australian community on ‘bridging visas’ by the previous Greens-Labor government.

“Australia is a free and democratic country where men and women are equal. People are expected to show respect for one another and not to abuse or threaten others.  This Code of Behaviour contains a list of expectations about how you will behave at all times while in Australia.”

“While you are living in the Australian community:

Seems reasonable on one level.

Of course, the bulk of the so-called asylum seekers neither respect European cultural norms nor the liberal versions of it which are said to represent our traditional values.

It is a three way shoot-out – the ‘refugees’ do not like traditional European Culture and cannot respect the Australian identity. We who uphold those things do not approve of liberal-feminist-gay-genderbending-drug-permissiveness which the Australian government represents – and the refugees hate both of us.

But the Australian Greens Party, who have long turned their back on their root cause of environmental conservation, have come out hysterically opposing any code of conduct be required of any ‘asylum seeker’.   This is despite nearly all boat arrivals since Rudd’07 officially deemed to be ‘economic migrants’, not genuine asylum seekers.  And there are 13 times more illegal immigrants than there are asylum seekers in detention who have arrived by boat.  Most illegals arrive by plane and overstay their tourist or holiday-working visas.

Queen of the Illegals herself, Greens Senator Sarah Hanson-Young has come out frothing: 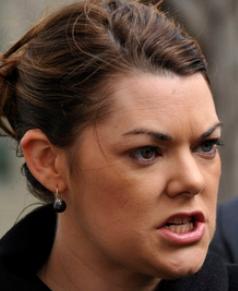 Hanson-Young:  “This is clear discrimination against a specific group of people and it needs to be called out for what it is.  “Having one set of rules for some people and a different set of rules for others offends the very ideals of a fair and decent democratic society.”

Perhaps Hanson-Young should preach gay rights to an Islamic extremist?

In an explanatory statement, the now Liberal government said it had become increasingly concerned about non-citizens who engaged in conduct that is not in line with the expectations of the Australian community.  In plain English: “illegals being illegal“, but meaning the expectations of liberal globalists.

But it can include not raping, murdering, rioting, drug-running, dealing in contraband, forming criminal gangs and such like.  Yet recent illegals seeking asylum to sympathetic host nation Australia, have committed all the above.    We remember the $20 million riot at Sydney’s Villawood Detention Centre in 2011 and others in costly detention centres at Christmas Island, Darwin, Pontville, Woomera, Nauru, Manus Island and Baxter (2005). 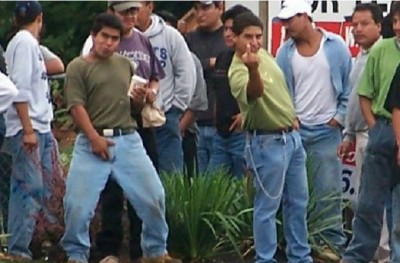 Rioting is not conducive to resettlement.

Australia’s Immigration Minister Scott Morrison, while in opposition before the September 2013 national election, promised that the Liberals in government would bring in a code of behaviour, following the spate of serious crimes being committed by so-called asylum seekers secretly let loose from detention centres by the previous Labor government.

Seems very reasonable on one level.

Sri Lankan asylum seeking fraudster Daxchan Selvarajah (21), was let loose on a bridging visa and was secretly accommodated by the Labor government inside Macquarie University’s student village in Sydney.  He was was found at 3am putting his hand down the pyjamas of a sleeping university student, and trying to break into a second female apartment. 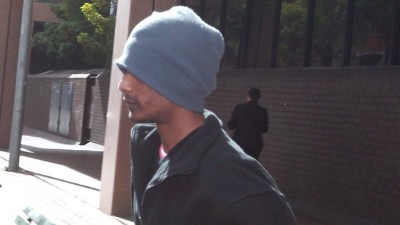 Selvarajah has also been charged with two counts of aggravated breaking and entering. Another 55 asylum seekers were found secretly living next to the university.  Nice.

Seems Greens motherly compassion for foreign so-called asylum seekers has come at the expense of the rights to safety of ordinary Australian women in their own country.

In March 2014, Afghan asylum-seeker Omid Roshan (21), secretly let loose by Labor on one of Labor’s trusty bridging visas, was was arrested by the NSW sexual crime squad in Sydney for abducting and raping a nine-year-old boy interstate in the ethnic hotspot of Dandenong in outer eastern Melbourne.  The Afghani has been charged with abduction, two  counts of rape and three counts of committing an indecent act with a child.

Clearly this is not only unacceptable behaviour, but an evil crime.

Fifty thousand asylum seekers remain loose on Labor’s bridging visas in Australia, and usually unbeknownst to local Australians.  [Hint:  they do look different and many drive taxis, work for Australia Post and walk into our homes to read gas and electricity meters.]

Most are on welfare payments, blowing out the cost of welfare.  The bastards should all be back in detention and promptly processed back to from whence they came.

“We will decide who comes to this country and the circumstances in which they come,” said John Howard.   But Howard was lying because he let them all stay!

The only (pseudo) legitimate asylum seekers remain those awaiting official processing in refugee camps outside Australian territory.  The fraudsters are the economic migrants who can afford to prepay people smugglers for chartered illegal fishing boats to bypass immigration.

The new Code of Behaviour (Form 1443) for asylum seekers mingling in the Australian community on bridging visas is a far inferior option to detention and deportation.  The  pussy-footing by the Liberals is also inferior to Australia simply withdrawing from the used and abused 1951 Refugee Convention which was designed for Europeans at the end of World War II.   Superior to any ‘Pacific Solution’, this is the ‘Repatriation Solution’!

Still, better than nothing, the new Code of Behaviour prescribes how asylum seekers let loose outside detention are expected to behave while they are living in the Australian community on a bridging visa. It also prescribes what behaviour that is not accepted.

It states:  “If you arrived in Australia illegally by boat and are 18 years of age or older you must sign the code before you can be considered for the grant of a Bridging E visa.”

“Signing the code means that you understand that if you do not abide by the code, your income support could be reduced or ceased or your bridging visa could be cancelled and that you may be detained and transferred to an offshore processing centre.”

Seems reasonable on one level.

Yet, Queen of the Illegals, Greens Immigration spokeswoman Sarah Hanson-Young is currently launching a motion of disallowance in the Senate to remove the behaviour code. 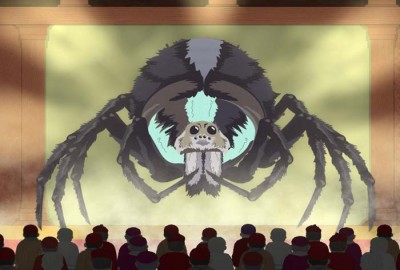 Last week, Iranian asylum seeker, Kazem Mohammadi Payam (35) on a bridging visa loose in Sydney went to the ethnic central shopping centre Westfield Parramatta, bought a kitchen knife and brutally stabbed to death the former partner of his girlfriend in front of shoppers.  Nabil Naser (40) died at the scene.

Police will allege Payam bought a knife at the centre and hid it before meeting Mr Nasam near the Myer ­department store on level 4 just after 10.30am.  After a 10-minute conversation, police say Payam pushed the 40-year-old to the ground and stabbed him several times.

Witnesses screamed for someone to intervene as the accused allegedly plunged the large knife into the victim’s chest several times.   Leaving the knife in the Mr Nasam’s chest, the ­alleged killer calmly removed his own shirt, lit a cigarette and made a mobile phone call as he waited for police, whom he then taunted. 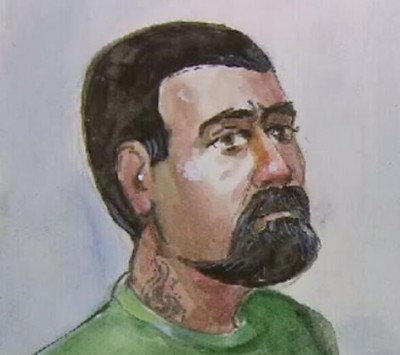 Payam had arrived in Australia by boat in 2009 and was granted a protection visa under the previous Labor government in 2010.

Then there’s Javad Heydari (35) from Afghanistan, allegedly stabbed a man to death and injured another in The Crescent, Berala (Sydney), at 2am on  September 6, 2013. He was charged with murder and causing wounding/grievous bodily harm to a person with the intent to murder.

A 47-year-old Sri Lankan asylum seeker was accused of squeezing a woman’s bottom during a Ricky Martin concert at Parramatta Westfield on May 9 last year. He received a 12-month section nine good behaviour bond and the matter is no longer before the courts.

Mohammed Salem Nazari (33) from Afghanistan, pleaded guilty to two counts of indecent assault after touching the thighs, bottoms and breasts of seven teenage girls at Sydney Olympic Park pool on December 8 last year. He was jailed for 14 months and will be deported once he has completed his sentence.

Rubel Sheikh (26) from Bangladesh, was ordered to serve 15 months in jail for indecently assaulting a visually impaired woman on July 17 last year. He touched her on the thigh and breast, and asked for “a goodbye kiss” at Ashfield station.

A 39-year-old asylum seeker from Sri Lanka was charged with assault with an act of indecency for attacking a pregnant teacher in Quakers Hill. He will appear in Blacktown Local Court on July 16.

Jayakodiarchige Appuhamy (25) was charged with two counts of sexual assault for allegedly raping a 15-year-old girl while on a church camp in Dee Why on August 22 and 23, last year. He had his bail refused and will appear for trial at Parramatta District Court on September 29.

About 30 asylum seekers released into the community have been charged with a range of offences, including people smuggling and paedophilia.

More than 30 asylum seekers released into the community have been charged with offences ranging from people smuggling to paedophilia and murder, according to Department of Immigration figures.

They are low-life scum. They have no right to bridging visas.  Australians have a right to walk Australian streets without the threat of dangerous foreigners on the loose with no background checks.  We are finding the hard way that they are criminals.

Yet asylum seekers who have committed domestic violence offences in detention­ have been released into the community.  Immigration Ombudsman reports tabled in parliament also reveal an asylum seeker with a long criminal history was allowed to repeatedly see family members in Australian home visits.

A 39-year-old asylum seeker who arrived in Australia by boat in November, 2010, was served with an interim intervention, preventing him living at the same address as his wife.  He was later issued with a domestic violence order but was transferred to live with his family “under the condition he would not commit domestic ­violence” offences.

An asylum seeker, 33, allegedly demonstrated “aggressive and abusive behaviour” towards staff members on six occasions during the year to February last year.  He had also been caught on film attacking his wife, an Australian resident, during a visit to Victoria’s Maribyrnong ­Detention Centre.

An asylum seeker, 38, who had drug, ­assault and theft convictions in his home country, arrived in Australia in 2005 and was given a special category visa.   He was later charged with offences including drugs matters. Court matters relating to unlawful possession of weapons, bail breaches and forgery were pending during his immigration processing. 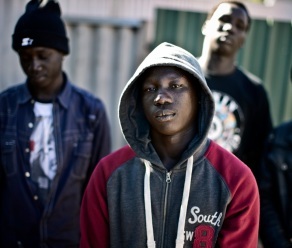 Australia has no moral or legal obligation to support illegal migrants before or after they arrive in Australia.