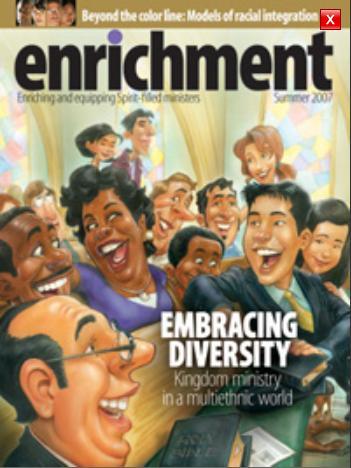 In the insular Canberran focus group bubble, Australia’s taxpayer-funded contrived city, the Immigration Department (aka Homely Affairs) is but a 5 minute Comcar cruise from ASIO’s Ben Chifley Building at 70 Constitution Avenue, and 5 minutes from the Australian Federal Police HQ at 47 Kings Avenue.   They probably all share early morning coffees together to chinwag.

Well they need to get out of their plush Canberran cocoons.  Their insular easy-going attitude resembles John Christopher Stevens (April 18, 1960 – September 11, 2012) American career diplomat and lawyer who served as the U.S. Ambassador to Libya from May 22, 2012 to his slaying by jihadis celebrating September 11 a year later in Benghazi 2012. 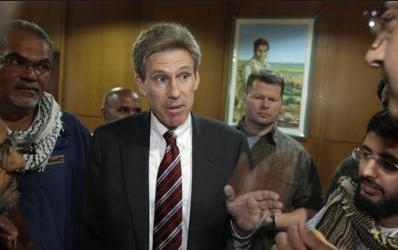 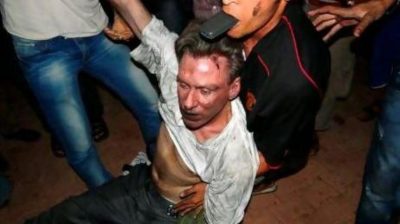 So we learn that yet another cohort of extreme Islamic imports, all Canberran-multiculti embraced, have set up yet another religious cult just to claim religious exemption status to avoid paying Australian taxes.

They wreck the place, they alienate the locals and import their own Islamics having no English.   It’s another beachhead multicult invasion upon a patch of Australia – what our forebears struggled for, fought for, and sacrificed for.

The 12-hectare rural property on the banks of the Colo River in the Hawkesbury local government area was bought in May 2017 for $670,000 by Dr Kari-Ali.   It wasn’t his money, rather he just tapped into foreign sharia finance (like most muzzies), so incurring no interest and the land title being controlled by Islam.

Isn’t sharia finance supposed to be illegal in Australia?

Or is it under globalist-multicultist Canberra financial services sector royal commission radar – just like pedo-Islam was under Gillard Labor’s selective royal commission into our nation’s child rape epidemic?

High steel fences quickly went up and Islamic funds have poured in direct from the Middle East. 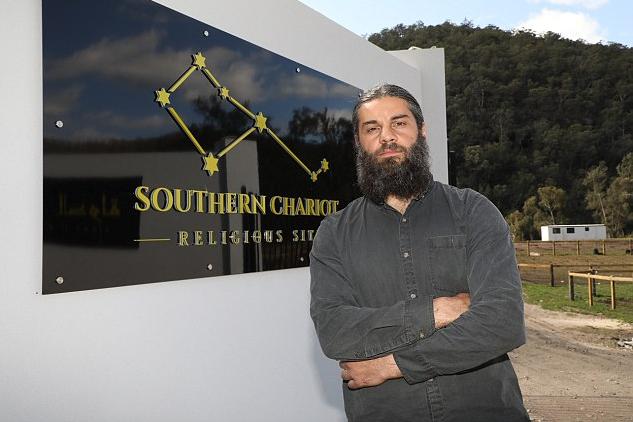 Yet essentially their 12-hectare compound development is illegal.  The local Hawkesbury Council says no approval was sought for any of the development, the sheds on concrete slabs, or two portable prayer halls for their muzzie-only workers, or the land clearing for the now 30 Arabic horses running around, or for the makeshift accommodation.  Hawkesbury City Council has launched civil action against Dr Kari-Ali alleging the men carried out illegal land clearing and earthworks on the site.

But the two cult Ali’s refuses to recognise Hawkesbury Council or obey Australian police and court laws because they reckon Australia is against Islam.  At the same time they claim their contrived cult da ‘Diwan Al Dawla Guild‘ is somehow about ‘Muhammadan Christians’.

Imam Dr Mustapha Kara-Ali reckons he doesn’t recognise Australian ‘religious’ law, while imbred bedfellow Dr Diaa Kara-Ali calls Hawkesbury Council officers  ‘Crusaders’ under the Christian Cross.  Yet the council officers had only turned up in their council Toyota Hi-Lux – no crosses in sight. 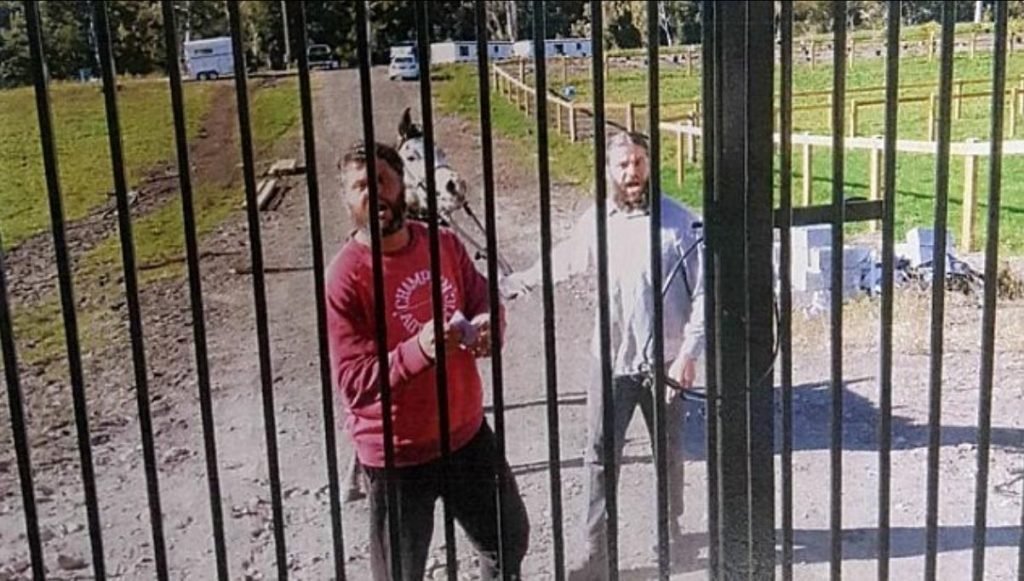 Diaa Kara-Ali (left) and Mustapha Kara-Ali (right) when confronted by Hawkesbury City Council officers at their gates at their Colo property back in July 2018.

The radical extremists have vowed to never let government officers force their way onto his land because they don’t acknowledge Australian law, conveniently.   It’s a novel excuse to development fees, to avoid paying rates, avoid taxes, avoid attending the NSW Land and Environment Court, and otherwise try to con Australian authorities by claiming Islamic sovereignty on their new plot down by the river in Colo.

Think Leonard Casley’s Principality of Hutt River of 1970, which in 2017 lost his a Supreme Court appeal against the Australia Tax Office to refund  more than $3 million in owed taxes between June 2006 and 2013.  Prince Leonard and son Arthur were shattered.  Indeed, think of William Lane’s 1892 socialist utopian temperance movement for a ‘New Australia’ republic down in Paraguay, guaranteeing apartheid.

In his Colo cult compound, Dr Mustapha Kara-Ali believes symbols within the Australian flag and New South Wales coat of arms are an affront to his religion (Union Jack, Southern Cross, the colour blue) and anyone bearing them is a ‘Crusader’ – like Hawkesbury City Council.  Instead, Mustapha prefers Islamic green and half-moon symbolism.

He refuses to attend court because he does not recognise its authority.

It’s a novel approach against government at all levels that many overcharged Australians themselves could consider having a try at conning, especially if these twin Ali nutters somehow be let to get away with it and end up setting a fake faith precedent – unlike poor Prince Leonard.

Hawkesbury locals observe that the 30 Arabic horses being agisted on the property.  But the horses are just a ruse and publicity front.  The twin Ali’s are setting up a rural Islamic base camp for jihadist brainwashing and a training assault course, perhaps an AK-47 rifle range.

The cultists at Colo reckon they intend to use the compound to “help troubled Muslim youth, particularly from western Sydney, engage with God.” (Allah)

A massive mosque on the rural site is being planned – nice and handy for jihadists to get pep talked in Friday Prayers pre-jihad missions upon unsuspecting Sydneysiders.

Recall the Jihad of Parramatta.  That’s exactly what brainwashed Farhad Khalil Mohammad Jabar (15) (his real name) did in October 2015 in Sydney’s Parramatta before jihading unarmed police civilian finance worker, Curtis Cheng, outside the New South Wales Police Force headquarters.  It was the Islamic Friday prayers ritual called ‘Jummah’ in Arabic.  The mosque is conveniently tucked away on the first floor of an apartment block in Parramatta’s central business district just streets away from the police HQ.  It was inside the Parramatta mosque that Jabar met with hardcore Islamics who handed him the loaded silver .38 Smith and Wesson handgun.  Jabar then changed into black robes and trousers and went jihad. 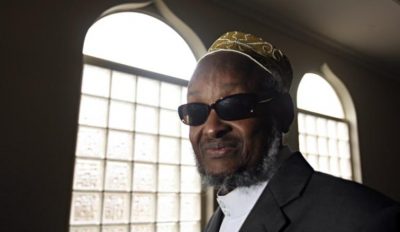 Then pepped up, Hassan Khalif Shire Ali was off to the Melbourne CBD to jihad. 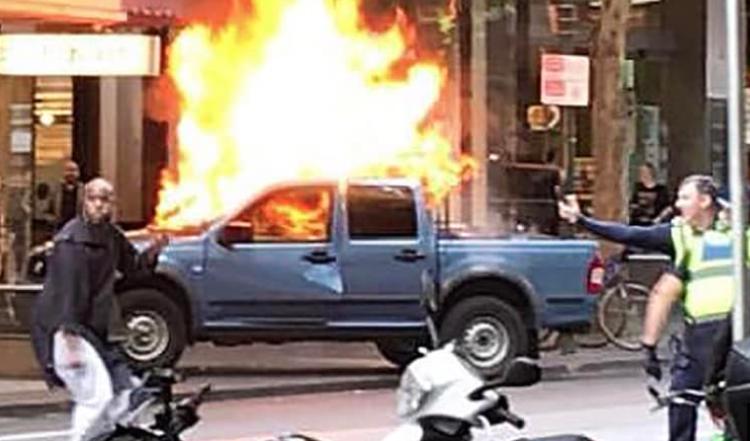 He was known to ASIO for close links to Islamic State, applying for a visa to Syria to jihad, but ASIO reckons its elites on $200K+ each were, well underfunded – “he must have slipped under our radar while we were chinwagging“.

In Sydney, the muzzie crap camp at Colo is just more foreign islamic beachhead invasion of Australia.  These Third World economic refugees don’t and won’t speak English.  They reject Australian laws and tell Australian authorities where to go.  They hate Australians and are only here for our taxpayer welfare and to colonise.  It’s called multiculti invasion.

For Australian nationalists, this is a trigger for auto-criminalisation, and auto-deportation.  It’s past time to outlaw the evil Islamic cult across Australia, round up and deport all Islamics for failing the Australian character test, and decommission all the moques nation wide.  Their arrogant defiance demands law and order.  If our Australian authorities, law enforcement and judiciary are hampered and stifled by leftist anti-Australian values, then simply correct our national laws to respect and protect Australians first.

This is how to deal with Islamics – shoot to kill. 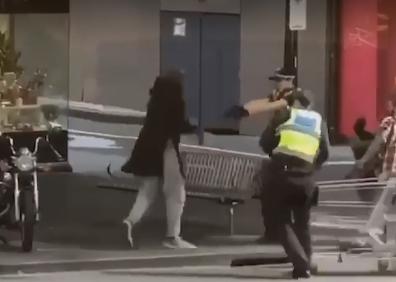 In the absence of any competent counter-terrorism wherewithal out of Canberra to promptly round this hateful scum up and auto-deport them back to whence they came – well it’s time overdue to proverbially unleash more competent and committed pig hunters to overrun the joint and send an Aussie simple message to the beachhead ferals: ‘bugger off out of Australia’ 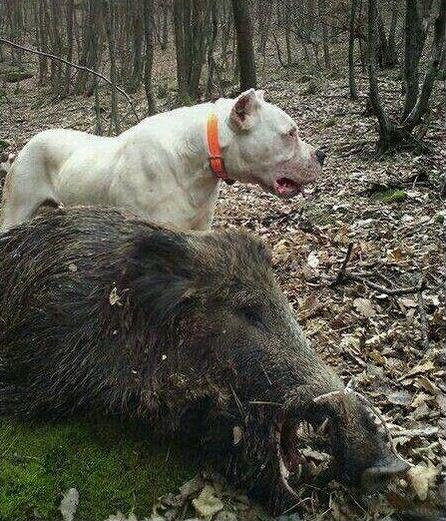