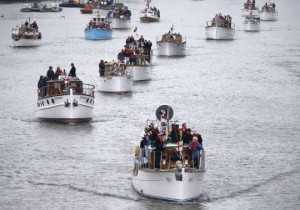 Boats of all shapes and sizes muster on the River Thames, in celebration of the Queen’s Diamond Jubilee, near Putney Bridge in London June 3, 2012. Britain’s Queen Elizabeth joins an armada of 1,000 boats in a gilded royal barge on Sunday in a spectacular highlight of four days of nationwide celebrations to mark her 60th year on the throne. REUTERS/Kevin Coombs (BRITAIN – Tags: ANNIVERSARY ENTERTAINMENT SOCIETY ROYALS)