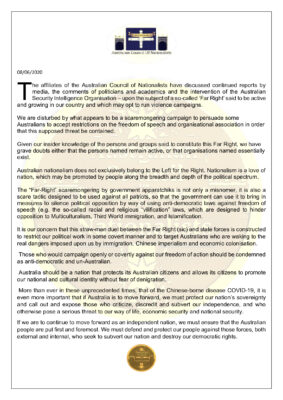 The affiliates of the Australian Council of Nationalists have discussed continued reports by media, the comments of politicians and academics and the intervention of the Australian Security Intelligence Organisation – upon the subject of a so-called ‘Far Right’ said to be active and growing in our country and which may opt to run violence campaigns.

We are disturbed by what appears to be a scaremongering campaign to persuade some Australians to accept restrictions on the freedom of speech and organisational association in order that this supposed threat be contained.

Given our insider knowledge of the persons and groups said to constitute this Far Right, we have grave doubts either that the persons named remain active, or that organisations named essentially exist.

Australian nationalism does not exclusively belong to the Left for the Right. Nationalism is a love of nation, which may be promoted by people along the breadth and depth of the political spectrum.

The “Far-Right” scaremongering by government apparatchiks is not only a misnomer, it is also a scare tactic designed to be used against all patriots, so that the government can use it to bring in measures to silence political opposition by way of using anti-democratic laws against freedom of speech (e.g. the so-called racial and religious “vilification” laws, which are designed to hinder opposition to Multiculturalism, Third World immigration, and Islamification.

It is our concern that this straw-man duel between the Far Right (sic) and state forces is constructed to restrict our political work in some covert manner and to target Australians who are waking to the real dangers imposed upon us by immigration, Chinese imperialism and economic colonisation.

Those who would campaign openly or covertly against our freedom of action should be condemned as anti-democratic and un-Australian.

Australia should be a nation that protects its Australian citizens and allows its citizens to promote our national and cultural identity without fear of denigration.

More than ever in these unprecedented times, that of the Chinese-borne disease COVID-19, it is even more important that if Australia is to move forward, we must protect our nation’s sovereignty and call out and expose those who criticize, discredit and subvert our independence, and who otherwise pose a serious threat to our way of life, economic security and national security.

If we are to continue to move forward as an independent nation, we must ensure that the Australian people are put first and foremost. We must defend and protect our people against those forces, both external and internal, who seek to subvert our nation and destroy our democratic rights.