How despicable and tragic that British Labour MP Jo Cox, a vocal supporter of Britain’s staying in the European Union, was assassinated quite brutally in the small north English town of Birstall, West Yorkshire, for her political views.

But how convenient a timing one week out from Britain’s controversial EU exit referendum that remains too close to call?

One consequence of the Jo Cox killing might be that it has derailed the Leave campaign in the forthcoming Euro referendum. The Leave campaign had seemed to be pulling ahead, but that has all changed now. The latest polls seem to show that the Remain campaign seems to have bizarrely caught up and is suddenly nosing ahead.

What is the implication of the assassination on the referendum – to sway the undecided to reject the exit?  If so, who benefits?

Jo Cox earned the respect and admiration of many Palestinians, pro-Palestinian advocates, advocates for international law, and many others when she courageously criticized Israel for its illegal abuse of Palestinian children.

Israel is the only country in the world that systematically prosecutes children in military court and the differences between how Israeli children and Palestinian children are treated are stark. For example, an Israeli child subject to civil court proceedings has to have access to a lawyer within 48 hours. Yet a Palestinian child can be left without legal guidance for as long as 90 days. This, and many other disparities, underline the existence of a two tier justice system operating in the West Bank. One where Israeli children are subject to the rule of law; Palestinian children are not. This disparity of treatment, along with the estimate that 59,000 Palestinian children detained by the Israeli military since 1967 are likely to have been physically abused in one way or another, is deeply disturbing. It is also a clear and fundamental abuse of basic human rights and international law, including the UN Convention on the Rights of the Child.

There has been commentary thus far on this shooting, but perhaps this is the definitive article. As the death of Jo Cox is being weighed up for its usefulness in silencing nationalist speech, and opposition to the agenda of replacing UK’s White population with non-Whites and refugee byproducts of illegal wars for the US and Israel, the reality of the “tragedy” is that in her lifetime Jo Cox helped many rape victims and other sufferers – so long as they weren’t White.

The mass rape of young White girls in her own constituency passed without comment. While treasonous Labour has created in England a situation that has swung back at them like a spring-loaded door, rather than being instructive of the pain and disenfranchisement being inflicted upon their own people, it becomes a narrative about how Englishmen and women, true White British subjects, are the real problem… and are potentially dangerous to the “humanitarian program”, or rather, to the aliens being force-fed into the population. Jo Cox equates to all the best virtues of tolerance and progressiveness: the shooter is sad old White male Britain that is now too dangerous to be allowed out at night.

However, it is no secret that Jeremy Corbyn, the leader of the British Labour Party, is a man of the militant Left, not a friend of Israel but indeed a “friend” of Hamas and Hezbollah. But what is less well-known is that Corbyn, along with comrades such as former London mayor Ken Livingstone are inspirational to individuals on the Far Right.

The Labour Party’s ongoing associations with anti-Zionist organisations/individuals are being applauded by the extreme Right – not just the Islamist Far Right but the “white patriot” Far Right. So interfering Israel increasingly lacks friends in Britain outside the Tories.  Seems Fighting Zionist Jews is all-important to white patriots and the ultra-left. Patriots and socialists agree that there is a problem with Jewish lobbies and rich Zionists in Britain. Both have a massive problem with the State of Israel, which they see as the centre of Jewish power and control.

So, another ‘Lone Wolf’ nutter theory?  The motive and capacity seem obvious with the immediate arrest.  But the planning?, the weapon?, the intel about the MP’s schedule?, her lack of security?, the timing?, the strategic implications and likely public reactions all worked out?.  Mmm.  The ‘lone wolf’ excuse is a standard government play-down tactic to divert public concern away from a broader political ploy going on.  Recent history verifies that such ‘lone wolves’ inflicting political murder have tended to have received necessary planning and support from a resourceful, dedicated and radical organisation.  Yet as criminal investigation uncovers such links, most remains withheld from the public by government to avoid embarrassment and incompetence over its lax home security. The mainstream media usually play along by moving on to other news.

Russia?  Russia has assassination form, poisoning its defector Alexander Litvinenko with polonium in London in 2006, but President Putin has expressly encouraged Britain’s exit from the EU; and Putin doesn’t hide his motives.

Israel?  How could Israel benefit from Britain remaining in the EU, or conversely and perhaps more pressingly, what threat does Israel perceive for itself should Britain exit the EU?

A Britain outside the EU means Israel is set to lose its important ally and insider voice in the EU and the critical traction in the shifting and sometimes hostile EU debates about what policies to adopt toward Israel. The EU has a tendency to boycott Israel over Palestine and the West Bank occupations and Britain’s exit could spark the EU’s isolation of Israel.

Israel’s economy is tied to Britain in trade and finance plus Britain’s EU membership facilitates Israeli firms the EU “single passport” access to Europe.  Outside the EU, Britain will have no influence on the direction of EU security policy toward Israel. Britain’s status in Brussels as a leading EU global security policy maker broadly supportive of Israel will vanish.

Is this all sufficient justification for Israel’s Mossad branch in London to recruit a neo-Nazi nutter, provide a gun, and set up an assassination so as to point the blame at British nationalists who support the Brexit?   There’s obviously more at stake that is not yet in the public discourse.

Netanyahu has more to lose than Putin.

If you want the public to think a crime was committed by your enemies, lure a vulnerable corruptible member, brainwash him and get him to do your dirty work.  How to get hold of an untraceable gun in Britain?  Not as easy as supermarkets in the U.S. But old obsolete guns are being increasingly adapted and used by criminals.  Mossad attends antique roadshows…”here ya go Thomas, try this one for size.” 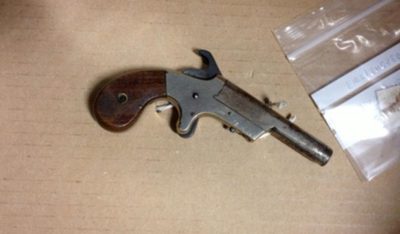 Israel hasn’t been deterred previously for dirty assassinations to achieve its ends, like in a Dubai in 2010 when Mossad agents disguised themselves as tennis players and assassinated Mahmoud al-Mabhouh. In London 2006, Mossad agents raided a Kensington hotel to get at a Syrian official.  Israel has serial form. Here’s a list.

Let the investigations unfold the truth, but tell it honestly to the British public, who deserve answers.

The death of Jo Cox is tragic, and the murder warrants a full and fully transparent investigation. Jo Cox will be rightfully remembered as a British MP who had the courage to address Israel’s violations of human rights and international law.

Extremist loner nutter and the assassin, Thomas Mair, has comparisons with British Neo-Nazi terrorist David Copeland, infamously known as the ‘London Nail Bomber’ of 1999 who targeted Black, South Asian and homosexuals.  Like Mair, Copeland had mental health issues, held neo-Nazi views, and was a former member of the National Socialist Movement and the more extreme and militant cell, ‘Combat 18’. 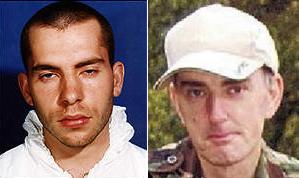 After his arrest, Copeland wrote to BBC correspondent Graeme McLagan, denying that he had schizophrenia, and telling McLagan that the “Zog,” or Zionist Occupation Government, was pumping him full of drugs in order to sweep him under the carpet.  How much was Mair under the influence of drugs?  Who gave them to him?  Who gave him the old gun?

Combat 18 (C18) is a neo-Nazi organisation from 1992 associated with the ‘Blood and Honour’ organisation suspected to be connected with numerous deaths of immigrants, non-whites, and other C18 members. The 18 in its name is derived from the initials of Adolf Hitler – A and H are the first and eighth letters of the Latin alphabet.  Combat 18 is anti-Semitic, so no wonder Israel took an interest, and with the flood of Muslims let into Britain, the growing Islamization and now with a Muslim mayor in London, Israel must feel increasingly marginalised in Old Blighty.

The Israeli flag has become a common feature at demonstrations and gatherings by the ultra-nationalists. 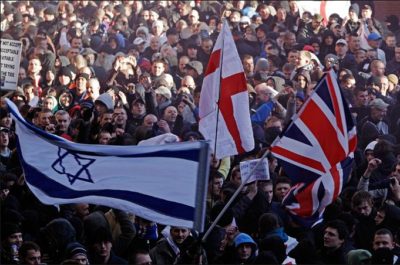 The English Defence League campaigns against the Islamization of Britain and Muslim fundamentalists and a lot of Jewish guys want to get well stuck in.  So the EDL has set up a ‘Jewish Division’ , or was it persuaded by Zionists?

The Jewish Division is a continuation of Zionist supremacy and, as its leader Roberta Moore (a Brazilian Jew) admitted, it is there to “exploit the EDL” or just to take it for a little Zionist ride.

Eventually, the EDL will wake up to the true motivation behind the newly emerging Jewish phoney patriotism, or is its Judaeo-centric tribalism?

Once any nationalist aligns with foreign interests they betray their nation.

In Australia we call them fake patriots, and those aligned to Israel, appropriately confused ‘ziopatriots’.  Clearly, Israel has infiltrated targeted extremist groups in order to monitor them, steer and disrupt them, if not hijack them and else to serve Israel’s ends.  It is in Israel’s zionist globalist interest to thwart nationalist movements in the countries where it has established its diaspora and strategic interests, such to discredit nationalists by convincing a vulnerable member to assassinate a political opponent, and to undermine a true nationalist cause like sabotaging Britain’s exist from the EU.

In Sydney, Israel has infiltrated ziopatriots and recruited a nutter in an extreme small group of one called ‘Squadron 88’. The Jewish News in Sydney reported June 18, 2015 of an anti-Semitic leaflet dropped in letter boxes in Sydney’s Jewish concentrated eastern suburbs with the reference to Squadron 88.  It has been conveniently used by ANTIFA commo-anarchists to incite hatred against patriotic Australians.

It’s all very sus and since exposed as a Liberal Party far right scam connected to NSW headquarters in Jewish billionaire Frank Lowy’s nearby Westfield corporate headquarters in East Sydney.

In Britain, there is a strong likelihood that Mair may be himself murdered, like the Lee Harvey Oswald twist, so as to complete the cover up and keep the vital Zionist links from coming out.

Time will tell. MI5 obviously still hasn’t a clue, else Jo Cox would still be alive.