Professional 30-year linehaul driver for TNT, Bob Knight, on June 25, 2009 was routinely driving his B-Double along Milperra Road, in Sydney’s now infamous ethnic west.  But when Bob pulled his 40 tonne rig up to the traffic lights at 10:40pm, he was shot in the head and killed – hit by a stray bullet from an ethnic Arab gang shootout in a KFC car park.

Police later arrested seven of the ethnic waring Elkobali Gang and Mariam Gang.The arrest included Mahmoud Mariam who has been today found guilty of killing Bob Knight with a Ruger pistol that he fired in the KFC car park.

Bob Knight was an innocent hard working man who should be alive today and would be if Sydney was safe.  He was farewelled by 1,000 mourners at his funeral in Canberra, remembered as a loving father, grandfather and in the words of TNT Linehaul Operations Manager, Brian Castle, a gentleman of the transport industry.

“He used to come out to the yard, get unloaded and load up again and go back down to Canberra. He was a top bloke, a real professional. He’d do anything for you,” Castle recalls.  Castle says all those at TNT who knew Knight were devastated.  “It was really hard for a lot of people to accept, myself especially because I dealt so closely with him,” he says.

Driving in western Sydney has come to this?

Every week Sydney police and media report ethnic violence previously unheard of in Sydney.  Political correctness has meant that only Caucasian appearance is reported in the gentile media. But any ethnic race is hushed up – Aboriginal, Arab, Islander, African, Asian.  Now Sydney’s ethnic violence out in the dangerous western suburbs is typified by weekly drive-by shootings, home invasions, stabbings, king hitting, car jackings, and bikie gang violence and the associated escalation in brothels and tattoo parlours.

The past week we have reported an ethnic Chinese woman, Jian Chen, who doped her ex-lover then tied him up stabbed him and severed his penis.  He died.  Yesterday she was sentenced to just 4 years gaol.   It seems to be a Chinese thing. Last July in Zhejiang province, China, 41-year-old Fei Lin was asleep when several men burst into his home at about 4am, placed a bag over his head, cut his penis off, and left with it.

Well, foreigners on entering Australia need to be read the riot act on Australia values, which prohibits murder and mutilation.  If as an immigrant you don’t sign up to Australian values and renounce unAustralian values, then sorry you’re on the next flight back to whence you came!

Vicious mutilator and murdered, Chinese ethnic Jian Chen, is not entitled to spend one day in an Australian gaol. The wicked bitch needs to be auto-deported to its backward origin and never allowed to return to Australia. The judge in her trial needs to be dismissed from the Bench.

Then two days ago, we read in Sydney about Indian ethnic, Chamanjot Singh, who slashed his wife Manpreet Kaur’s throat eight times with a box cutter.   The court heard that Singh had a violent history toward his wife.  Yet the Sydney judged slapped Singh on the wrist with a manslaughter charge believing some con about being ‘provoked’ by verbal abuse.  He got just six years gaol.

Is the judge a Taliban?  Where do these shit judges come from?  Sharia Law?  Obviously they have no regards for human life and they have no right to dispense thier barbaric justice in Australian courts.

The judge sends a message to ethnic men with their imported backward patricarchal attitudes, which they are encouraged to keep with Foreign Labor’s naive celebration of multiculturalism…anybody can kill someone because they know if they say in the court, I lose my self-control, they will get out after three or four years.

The ethnic Arab gang that shot Bob Knight were swooped on in raids by police Strike Force Wyndell at Sydney’s ethnic ghettos Greenacre, Bankstown and Chipping Norton in April 2010.  But despite all the police efforts and investigations over the years since, they were all let off except for Mariam Gang member Mahmoud Mariam who today got 5 years, 9 months gaol, but will be eligible for parole in April 2016, less than four years away.

In the NSW Supreme Court in Sydney August 30, 2012, Justice Latham described Mariam’s crime as “a most mindless display of violence” and said the men had shown a disregard for “vulnerable” members of the public.  “This was a premeditated assembly of eleven gang members for the purpose of the settling of a score which seems to have arisen from a petty assault earlier that day,” she said.  “It is an abhorrent and despicable display of male aggression.”

The Elkobali Gang had been involved in a clash with a teenage member of the rival Mariam Gang at the Bankstown Centro shopping centre earlier that evening and then two gangs arrived at the KFC car park armed with guns.  They were all prepared for murder and that is what happened.

Multiple gunshots were fired during an altercation.  Three members of the two gangs involved suffering multiple gunshot wounds. It wasn’t just one stray bullet.  It was a gunfight in suburban Sydney.  Mahmoud Mariam was also charged with speeding at 126km/h through a 50km/h zone and on April 11, 2010 being in possession of seventeen $50 bank notes which were suspected of being stolen.

Two of the men were sentenced to three-year good behaviour bonds after pleading guilty to affray.  The other man, who was found guilty by a jury of affray and maliciously destroy property by fire, will be eligible for release on parole within two weeks- as his sentence took into account the time he has spent in custody. 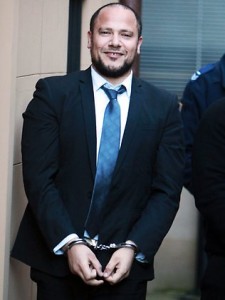 Justice Megan Latham’s words are hollow appeasement.   Mahmoud Mariam came to KFC armed with a firearm to kill.  And he killed a man, yet Justice Latham obviously has little value for human life.  She gave Mahmoud Mariam just 5 years for manslaughter and acquitted the other members of the Elkobali Gang, Adel Elkobali, and Hek have been acquitted of murder and manslaughter.

Some consolation to Bob Knight and his family and friends!  Bob is dead and cannot be brought back.

“I’m suffering – I have got two children, I’ve got no one to look after them,” the mother said.

What a friggen joke the NSW Supreme Court has become and these arrogant criminals know it.  So is this the consistent message of lenient sentencing the Sydney Supreme Court is sending to the Sydney community?   These lenient judges are destroying our faith in the judicial system and undermining the fabric of decent society in Sydney. South West Sydney has become an enclave of ethnic violence, and these judges are but encouraging it in their ultra-lenient decisions.

I may as well get me a handgun on the black market, so if I get hassled I can pop the bastard knowing I will only get 4 or 5 years gaol.   In Britain, gun control has made home invasion safe for criminals.  No way. I will take the Charlton Heston option any time: “I’ll give you my gun when you pry it from my cold, dead hands!”

The ethnic conversion and displacement of traditional western Sydney started with Gough Whitlam and the Foreign Labor Party have perpetuated the uncontrolled immigration and multiculturalism under Hawke, Keating, Rudd and Gillard.