What have Australian workplaces become when an employer can ignore workplace bargaining and have power to set mounted police with truncheons and capsicum spray against peacefully protesting workers? 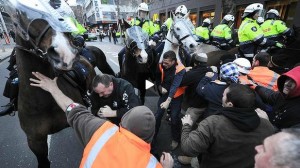 Who does third generation Daniel Grollo think he is? The Mafiosi Godfather?   Who does Victoria’s Premier Ted Baillieu think he is setting mounted police with truncheons against picketing workers?

Grollo loves money and hates unions, calling them ”scabs” and ”grubs”.   Grollo wants all his workers to be non-unionised.  He won’t let CFMEU shop stewards on any Grocon project. His hate is such that he won’t even let workers put CFMEU stickers on their hard hats or lunch boxes.

Grollo has a history of trying to undermine construction workers’ rights to enter into Enterprise Bargaining Agreements (EBA’s) . He wants to scrap EBA’s and install Howard’s workchoice individual agreements, where Grollo has all say and the worker none. Grollo has barred unions from his construction sites.  This is illegal. It is unAustralian.  Grollo needs to realise he is not in Putin’s Russia or Lukashenko’s Belarus or in Thatcher’s Britain.

And the LibLab Victorian Government is on the side of big multinationals like Grocon because all they see is the economic dollar.  The LibLab Premier Ted Baillieu has done a little Johnny Howard Work Choice, recently passing anti-union legislation.

Setting mounted police against peacefully protecting workers is industrial thuggery. It is undemocratic and has no place in Australia. It is reminiscent of 1980’s vicious Thatcherism.  When then British Prime Minister, Margaret Thatcher, decided to replace half the mining workforce with more efficient machines in coal mines across Northern England and Wales, the miners protested and picketed, supported by the National Union of Mineworkers.

Thatcher sent in the mounted police with truncheons against the miners.  The miners had nowhere to go.  It was their livelihood. 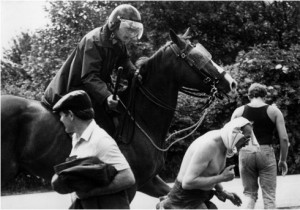 Australia has it’s own union origins. The 1891 Shearers’ Strike in Barcaldine was not fought in vain.  If Daniel Grollo thinks he is another Charles Fairbain wanting to destroy unions, he has a problem.

The Australia First Party supports the rights of workers and their unions to demand fair enterprise agreements and recognises anyone’s democractic right to protest peacefully.

Australian unionism is integral to Australia’s identity and workplace freedoms.  Australian workers must stand up against global multinationals like Grocon and safeguard the hard-fought workplace rights and conditions by our forebears. Unity in action is the first stage in winning political and organisational unity.

“We become slaves the moment we hand the keys to the definition of reality entirely over to someone else…” – B.W. Powe, Towards A Canada Of Light.