Australia needs to slam its door on the immigration invasion.  Problem is the Liberals and Labor love ’em for their money and demand economics.  The watermelon Greens love ’em for just being foreign and welfare dependent.

In their thousands the ethnics arrive, set up ghettos in urban Australia according to ethnicity, speak little or no English, get no decent job and import illegal drugs.  They do nothing positive for Australia.

Today, Federal Police report intercepting a 200kg crystal methamphetamine (ICE) shipment from China last week valued at $200 million that had been concealed in the tyres of a truck direct from Shanghai.  The truck arrived at the Port of Melbourne on October 1, and the drugs were then delivered to a factory in nearby Brooklyn.  Also seized was $80,000 in cash.  The police operation is connected with a multi-agency taskforce cracking down on drug-smuggling on Victoria’s waterfront.

But the mainstream media deliberately conceals the fact that they are foreigners or immigrants, and even their nationality.  We know they are ethnics.  Melbourne Magistrates’ Court lists the Joint Organised Crime Taskforce prosecuting the following accused in a committal hearing today: Yana Orm, Nhat Pham, and Cuong Viet Bui.   They sound pretty ethnic to us.

Two of the men were employed as dock workers until a month ago, when one was suspended.

Why the hell are foreigners given access to our ports and border security?  Where is Australia’s screening regime to prevent dodgy migrants flooding into Australia to do crime?

Last February, nearly three times that amount of 585 kilograms of crystal methamphetamine was seized in Sydney.  The drug runners were all ethnic including Singaporean and a Hong Kong man, connected to an Asian drug syndicate.  The ice was disguised as cleaning chemicals shipped in containers from south China.

All this policing is costing Australia hundreds of millions. How much does our Asian Crime Squad cost Australia every year?  Migrants are not worth the cost burden and social harm to Australia, even if they had decent jobs and paid taxes.

These Asian crime syndicates are trafficking into Australia illegal automatic firearms and drugs, including heroin, cocaine and methamphetamines, and fake credit cards. 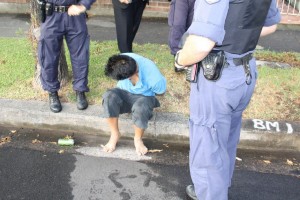