Detective Senior Sergeant Tom Armitt told reporters the victim and his friend were walking along on Duncan Street in Fortitude Valley’s China Town around 3.30am trying to get a taxi home, when they were set on by four males of ‘Pacific Islander Appearance‘.

“A short exchange has occurred and the victim was struck once to the back of the head, has fallen forward and he’s currently in his present condition,” the detective stated.  “This is a random act of violence.”

It is believed to be a random racist attack for kicks by the foreign gang.  There is no indication the victim knew who the offenders were.  They left the teen for dead. 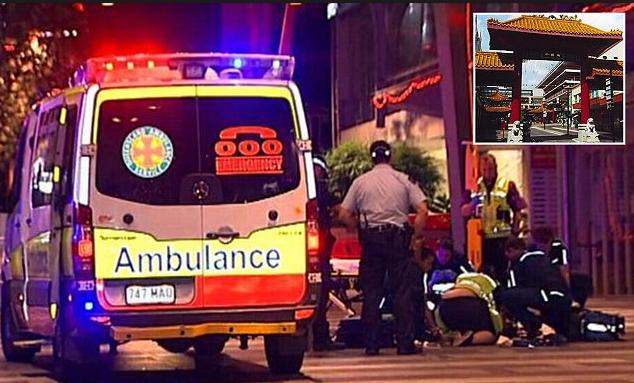 It was one of two attacks overnight in the notorious nightlife area. In the other incident, a 24-year-old man was taken to hospital for treatment after being viciously assaulted at a nearby nightclub.

Queensland MP Andrew Laming has attributed the escalating ethnic violence by Pacific Islanders to any of them do a day’s work today, or was it welfarism.

Pacific Islander criminals and thugs transit through New Zealand to qualify for welfare in Australia, else steal our local jobs in construction, transport, or security, or just import their criminal syndicates.

Open door mass immigration policy by Australia’s Liberal and Labor parties since globalists Whitlam and Fraser have caused nearly a million Pacific Islanders to swamp urban Australia in ghettoed clusters, such as around Brisbane’s notorious ghetto of Logan.

But ‘Abo Kiwis’ are ‘statistically invisible’ in Australia, because many have migrated from the Pacific through New Zealand, and are deceptively identified in Australian Census data wrongly as New Zealanders. 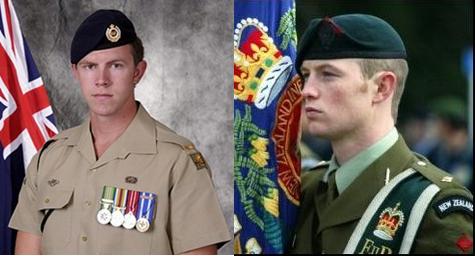 Australian and New Zealander ANZACs have fought and died together defending our joint cultural values and way of life, just like these two soldiers recently lost

But most immigrants from New Zealand into Australia are Melanesians or Polynesians – that is from Tonga, Samoa, Papua, Cook Islands, Fiji – and so don’t look a bit Kiwi.

What do Aotearoa‘s 700,000 Māori think of these plane loads from the Pacific?  Perhaps they are smart realising that like Indonesia, NZ is just a transit lounge for illegals to Oz. Good as gold?

First Generation Pacific Islanders have been lured to Australia by false rumours of work, else to our Centrelink welfare and $5000 baby bonuses.

But with bugger-all skills save fishing, Pacific Islanders typically end up in unskilled low-paid jobs.  They can’t afford child care.  Any work they do scam is long,low-paid and often shift work. Then they invite their cuz, claiming family reunion visa crap. Hangers on just overstay their visa.

This leaves their offspring unsupervised and open to wayward mischief. As their kids grow into teenagers, they lack appropriate socialising in Australian values, mores and acceptable behaviours.  Youth are confused by the split cultures of their parents/forebears and with Australian contemporary society.  They lack a sense of belonging, cultural pride, self-esteem.  Pacific Islander youth are exposed to dubious role models.  They seek alternative communities where they can find acceptance, and more freedom of action.

Are the parents are too thick to notice or just couldn’t give a shit?

Many Pacific Islander kids don’t succeed at school in Australia, let alone qualify for tertiary education here. So many become idle and their skint cycle perpetuates.  Boredom, frustration and anger builds. Many escalate this alienation into anger and into gang membership and so turn to crime.

Effectively, delinquents are raised in an ethnic racial ghetto, and the poverty cycle perpetuates inter-generational delinquency.

Brisbane’s outer south-west suburb of Logan has let become 50% Pacific Islander, so another emerging multicultural ghetto.  The influx and concentration of Islanders with multicultural permission to remain Islanders and to establish an Islander neighbourhood, resulting in racial tensions with local Aborigines.

Most in Logan are unemployed.  Most are Pacific Islanders or Australian Aborigines.

Multiculturalism has encouraged Logan to become a concentrated black ghetto.  Bird of a feather is the philosophy, and it is being played out in Logan.   Logan has typically low-income ethnics.  They breed and fifteen 15 years later a growing idle youth prevails of multicultural ethnic minorities – Pacific Islanders.  They youth are bored that they turn to race-based gangs and race-based crime.

Says a lot about liberal multiculturalism.

Logan is becoming Australia’s Bronx, Detroit, Ferguson, Charleston, Papakura.  And all the Liberal and Labor PC brigade can do is fund the multiculturalism social spiral of ethnic antagonism and hate.

Wake up call from Logan in January 2013:

An Aboriginal family in 2013 was reported as saying it was targeted in one of those incidents by Pacific Islander men who used machetes, metal poles, bats and bricks in an attack that damaged a house and cars. Tensions flared again late on Monday afternoon, prompting police to call in the riot squad to control the crowd.

Pacific Islander elder, Ofa Fukofuka, said that because Logan was so multicultural, people tended to be identified by their ethnic groups.

Queensland MP Andrew Laming, asked “Did any of them do a day’s work today, or was it business as usual and welfare on tap?” 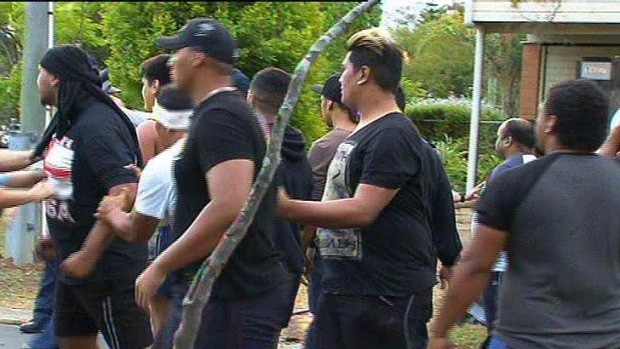 Logan:  Multicultural war outside New Zealand without any Haka

In Melbourne, Pacific Island gangs have become the most violent in Melbourne’s West.  Most of these Islanders families migrate from South Auckland, New Zealand.

Gangs such as the ‘Bloods’, the ‘Crips’, ‘Full Blooded Islanders’, ‘Crazy Coconuts’ and the ‘48 Boys’ (overweight Samoans).

In May 2013, the Maori/Pacific ‘KYR Gang” did an armed robbery with masked faces and caps using a baseball bat and an axe to rob a MacDonalds store and threaten the staff.

The majority of the gang members are migrants of Maori or Islander backgrounds. Some have older relatives in jail and/or connections to gangs in New Zealand.

New Zealand PM John Key needs to come clean about his support of criminal Kiwis in Australia and for his support for NZ to be used as a transit lounge for Pacific Islanders coming to Australia. To be blunt PM John Key, the only special relationship between New Zealand and Australia is legal not illegal.

PM John Key needs to start paying the full cost of his criminal exports to Australia.

Australian government multicultural policy includes propaganda such as omitting to report demographic statistics like in June 2015, New Zealand’s estimated resident population was 4.6 million, but that a million of those are Pacific Islander.   Such as the fact that one in five prisoners in Australian gaols are foreigners – disproportionately over-represented by Pacific Islanders (Samoans and Tongans), Africans (Nigerians, Sudanese) and otherwise by Lebanese, Indonesians, Vietnamese and Romanians.

Liberal and Labor joint multiculturalism policy has encouraged such foreign ethnic groups to shun Australia’s host culture and to import their own cultures. It is surprising that the Solomon Islander clusters aren’t allowed cannibal butcher shops, else run crying to Gillian Triggs, the anti-Australian rights commissioner – the most powerful Leftist in the country on $300,000 a year paid for by us taxpayers.

Pacific Islanders and Abo Kiwis are considered the most violent multicultural demographic in Australia. 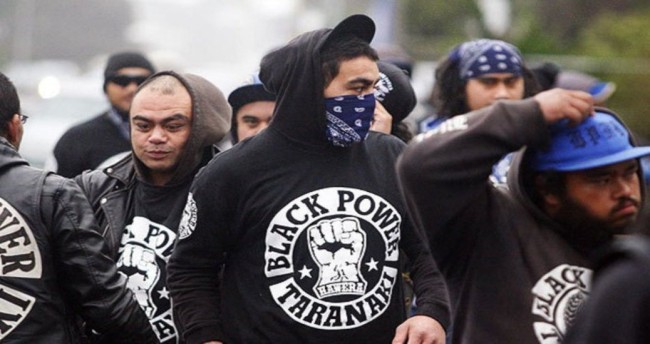 In Sydney, Maori and Pacific Island gangs are classed as the second most serious crime problem, second only to violent Lebanese gangs.

New South Wales Police regard them as a crime scourge because of their widespread involvement in house and car burglaries, with offenders starting as young as 14.  Their crime profile is worsening with Australia’s bikie gangs recruiting Pacific Islanders from New Zealand to shore up numbers as Sydney’s gang wars spew into suburban and city streets almost daily.

Across south-west Sydney’s multicultural zone, all but 10 of 32 drive-by shootings or bombings in the past six months have been linked to bike gangs.

Islanders are being targeted by newer and more violent gangs such as Notorious, formed in 2007, and chapters of the Bandidos, dominated by Middle Eastern migrants, particularly Lebanese, according to a police source.  The officer said gangs wanted Islanders for work as bouncers at their night clubs, security guards and for drug-running.  This is in addition to a long-standing recruitment of Maori into gangs though Australian police tend not to differentiate between Islanders and Maori, tagging them all as Polynesians.

The Australian Crime Commission estimates there are about 3500 outlaw bikies in Australia in 39 gangs. The number of Pacific Islanders involved is unclear.

The source said Australian police considered Polynesians who had  arrived in Sydney via New Zealand  to be the second most serious crime problem in Sydney behind Lebanese criminals.

Some of the Island and Maori youths were second-generation residents of Australia but there were a good number whose families still lived in New Zealand, as in the case of 21-year old Maori gang member Pomare Pirini, arrested on affray charges arising from the gang fight at Sydney Airport last month, in which Hells Angel member Anthony Zervas died.

At the heart of the violence  is a struggle for control of criminal and drug-trading activity and the nightclub and prostitution industries.

He said Kings Cross-based Notorious, thought to be one of the biggest recruiters of Pacific Islanders, was run by young men in black, bullet-proof four-wheel-drive vehicles rather than on bikes.

They were after revenue from the billion-dollar drug trade. Maori have long featured in some gangs.

Derek Wainohu, president of the Sydney chapter of Hells Angels, was stood down from his job as a crash laboratory manager at the Road Transport Authority after being linked to the fatal bashing of Anthony Zervas in the airport fight.

Junior Togatuki, a Tongan offspring born in New Zealand, once convicted in Australia should have been auto-deported back to NZ at New Zealand government expense to serve time in custody as soon as he was convicted of armed robbery as a juvenile. 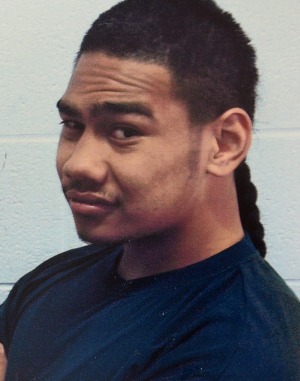