Tony Abbott is simplistic about his grasp on violent threats to Australians.

He ignores repeated violent protests and criminality by globalist anarchist group ANTIFA, which frequently acts with impunity in Australian cities. 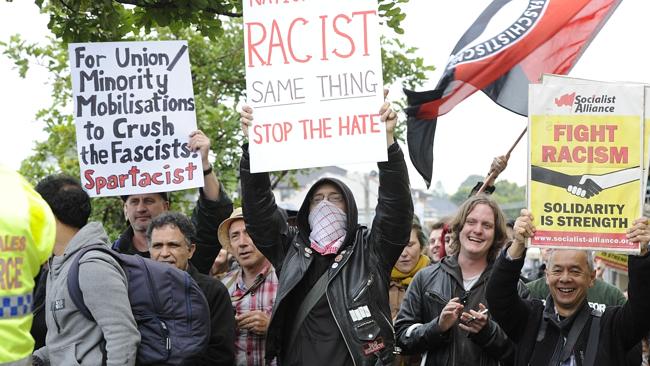 Violent ANTIFA with similar anti-Australian hate groups on another occasion

Consider just yesterday in Sydney’s Belmore Park opposite Central Railway Station where a peaceful demonstration by the Party for Freedom was set upon by ANTIFA flag waving anarchists.  An older man had a cut eye and his wife had a camera stolen. Another person was also struck.

Yet again ANTIFA violent criminals have caused affray and assault as part of its ideological and ICE-fueled attack on any Australians they consider patriot or nationalist.

Australia First Party condemns the assaults on a few members of the Freedom Party in Sydney’s Belmore Park today.

In inner city areas of Sydney, posters have appeared calling upon their followers to “Bash” “Nazis, Racists And Islamophobes”.

The posters carry the website address of Slackbastard. One poster sighted recently carried photos with violent images of our party [resident and the leader of the Greek Golden Dawn party, Nikos Michaloliakos .

In Melbourne, a poster also appeared with the photos of two leaders of the United Patriots’ Front.

Australia First Party calls upon all patriotic people to take the appropriate precautions at all public events.