News Corp Australia’s nationally circulated article in The Australian newspaper of February 23, 2015, reproduced in the public interest, (save it be deleted):

‘Ten things we have learned about Peta Credlin’

“PETA Credlin’s extraordinary power and influence over Prime Minister Tony Abbott has been revealed in two recent reports in The Australian.

Here 10 things we have learned:

Ms Credlin has decided she’s not going anywhere despite calls in the Liberal Party for her to resign. She recently told colleagues that if she quit it would suggest that she had done something wrong.

Far from shying away from the controversy, her office walls are covered with memorabilia, including framed cartoons from Bill Leak and Eric Lobbecke making fun of her relationship with the PM.

But she does seem to have taken the hint to lay low. One of the criticisms of Ms Credlin is that her profile has been too high. While previous advisers have wanted to remain anonymous, Ms Credlin makes no secret of her opinion.

Nowadays she rarely appears in public, preferring to stay in her office.
When told that some in the press gallery were wanting “proof of life”, she laughed and said: “I am alive and working hard”. 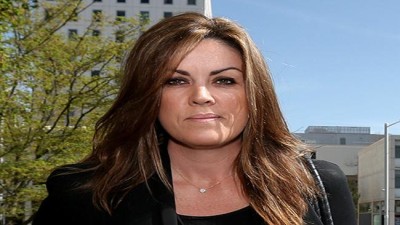 2. She was OK with invading Iraq

Last year when Tony Abbott wanted to take on Islamic State, he reportedly thought about sending 3500 Australian ground troops to invade northern Iraq, although Mr Abbott and the Department of Defence have denied this. Apparently Ms Credlin offered no resistance to the idea. But military planners were aghast and quickly talked PM out of it. Now the suggestion has people questioning Mr Abbott’s judgment — again.

3. She also had a hand in THAT disastrous Budget

Ms Credlin was a key architect of the Budget, which sunk the government’s support last year. She reportedly sat in on Expenditure Review Committee meetings and sometimes interrupted ministers. “None of us told her to back off, which maybe we should have,” one of those in the meetings said.

Mr Abbott and Ms Credlin also refused to retain Martin Parkinson as head of Treasury, deciding against the wishes of Treasurer Joe Hockey, that he would lose his job.

“He promised an ambitious agenda based on the idea we are in serious economic trouble but he misled people about how tough this would be. Abbott did not properly explain the plight of the country — that it is living beyond its means — and too many of the measures he introduced in 2014 had design flaws.” 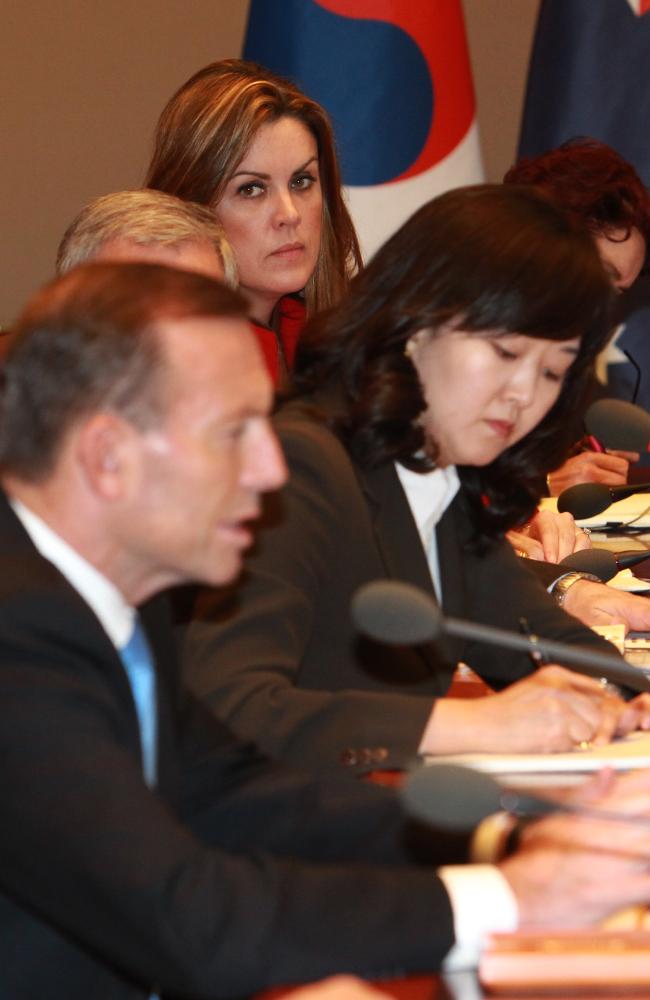 4. She can stop the PM from talking by raising her hand in front of his face

Let’s face it, this is probably a good thing as Mr Abbott is not good on his feet, but rarely has an adviser been seen cutting across the leader the way Ms Credlin does.

One of Abbott’s oldest friends told The Australian the relationship between Mr Abbott and Ms Credlin is “an elusive male-female dynamic”, and it’s the PM’s “exaggerated gallantry towards women” that explains why Abbott allows her such a dominant role.

The friend also suggested that Mr Abbott is “lazy on detail”, another reason why Ms Credlin has been left to micromanage the government.
She has so much authority she interrupts ministers in Budget meetings, effectively runs the Expenditure Review Committee, and manages the Cabinet Office as well as the PM’s office. She decides who the PM sees, what the agenda is, who is appointed to run the offices of cabinet ministers and the order of cabinet business. 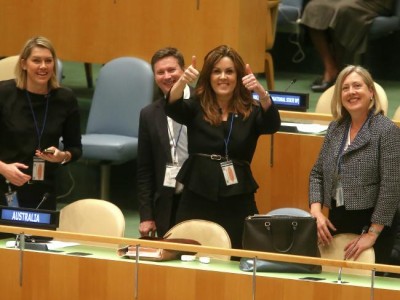 One of the reasons why the relationship between Ms Credlin and Foreign Minister Julie Bishop has become so poisonous is because she tried to control the media appearances of ministers.

Last year, standing next to Abbott, she told a group of Australian journalists that Barack Obama was “the lamest of lame ducks”, to which Mr Abbott said nothing.

On another occasion, Mr Abbott made no complaint when Credlin put her hand in front of his face to stop him replying to a question from an editor.

5. They spend a lot of time together … like a weird married couple

In the past six years Mr Abbott and his chief of staff have become an inseparable unit. During 2013, an election year, Ms Credlin spent 200 days on the road, mostly with Mr Abbott.

She has been known to finish his sentences and sometimes answers for him when he is asked questions, which she did once at a dinner in Canberra last year.

She has become in effect, a co-prime minister. Her office is next to Mr Abbott’s where she works the phones and manages the details of running the government, while the leader prefers to sit and read Winston Churchill, ponder national security and Islamic State, and write his own speeches.

Good with detail: Credlin has been known to finish the PM’s sentences.Source:News Limited

Many who know PM well say that he believes he cannot run the country without her.

“You wouldn’t be here if it wasn’t for Peta,” he has told colleagues who raised complaints with him.

“She even chooses his ties,” says one cabinet minister’s staffer. “She likes blue!”

6. She has eyes and ears everywhere

Ms Credlin has been accused of sidelining anyone who had direct contact to Mr Abbott and has installed her former colleagues in ministerial offices.

“Peta has put her plants all through the system, in many ministerial offices. This way she can know what’s going on,” one insider told The Australian.

She is also married to the Liberal Party’s federal director, Brian Loughnane, a relationship that makes it more difficult for anyone to openly voice a complaint about the PM’s office.

Her insistence on approving staff appointments, not just for the Liberal party, but for independent MPs has created major tensions. Her directive that all staff must live in Canberra or in the electorate of their member to save money has also led to threats of legal action.

Asked for a definition, one cabinet minister’s staff member ran his finger across his neck.

“To be beheaded,” he said. “Anyone who is not on message is simply killed. It began when we were in opposition, then through the campaign, and it hasn’t stopped. I don’t think they’ve real¬ised we’re now in government.”

One Liberal senator said even the government’s pollster can’t get to see the PM.

“The problem is there is a ¬funnel into the PM’s office, not a sieve. The funnel is Peta Credlin, and no ideas can get to Abbott unless people get them through Credlin.”

Credlin decided who got to celebrate with Tony Abbott on election night. (Source:News Limited)

8. She is being blamed for leaks

Ms Credlin is being blamed for leaks around John Howard’s former chief of staff and now senator Arthur Sinodinos. The media was leaked a story the night before Mr Sinodinos was due to resign and he is convinced it came from Ms Credlin.

Both Credlin and the PM’s press office director Jane McMillan insisted they had not leaked the information but the next day the two women had a huge argument, witnessed by many in the Prime Minister’s office.

Mr Sinodinos remains convinced that Ms Credlin knifed him and had authorised the leak, which meant he lost control of how the story would be portrayed and created the impression that Mr Abbott had forced him out.

One insider said the PM’s office is filled with distrust with Ms Credlin playing a role in the instability.

The PM’s chief of staff created instant ill will in the office when she reportedly told newly hired press office director Jane McMillan that another staff member had not wanted her to get the job.

Ms Credlin would later fall out with Ms McMillan, and her replacement Andrew Hirst was not able to answer this simple question: Does Jane McMillan still work for the PM?

“I’ll have to get back to you,” he told journalists.

The sense of distrust has also become widespread inside the government.

Despite her tight control of Mr Abbott and his office, the PM has gone on to make major political errors including his decision to knight Prince Philip.

One minister has said that Ms Credlin’s power could not continue and the party was willing to bring down Mr Abbott if necessary.

“They (Abbott and Credlin) have unnecessarily made enemies which means there’s no reservoir of goodwill when they need it,” the minister, who has publicly been defending him, said.

Another influential Liberal says that Abbott will inevitably face another challenge unless he acts.

“We warned you ‘take Hockey out and take Credlin out’ and you have done neither,” he said. “We can’t let this lot do another budget.”

(So, a considerable costly researched feature article by The Australian – purely to discredit someone Murdock wants out of the way.)