A very real fear transpiring is that half a million muslims let into Australia under Rudd and Gillard are now planning stage 2 – to impose Sharia Law in Australia.

But aware Australians will have none of it. We are sick of being intimidated by foreigners demanding our tolerance of their anti-Australian behaviour, and more recently of imported muslims now demanding compulsory halal foods, halal tax, mosques, sharia law, and jihad downunder.

Labor and Liberal governments have a lot to answer for secretly letting anti-Australian barbarism into Australian communities.

Islam, Sharia, Mosques and Halal is cultural racism against Australians.  So bugger off!

So ‘Reclaim Australia Rallies‘ are the result of a “grassroots movement” that has been organised into a nationwide rally being held in 14 capital cities, major cities and townships and rural areas on April 4, 2015. 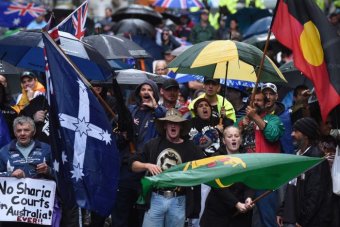 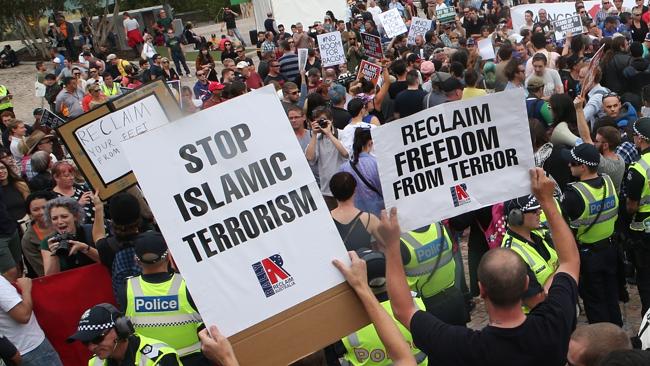 Aussie speakers at the rallies spoke of our right of true Australians to be fighting for the country’s democracy, culture and way of life.  They listened and spoke out against the recent threats posed on Australians by islamic sharia law, halal certification and its extremism and terrorism.

And despite heavy rain in many cities, the weather did not deter the hundreds of protesters from attending the nationally organised rallies. 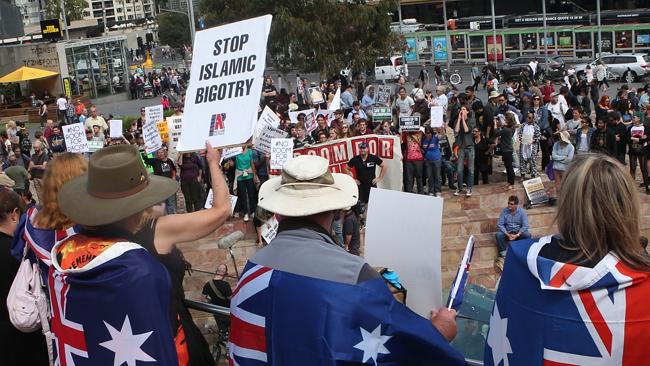 Numerous comments on the website praised the event, with Stephen Darcey Deheney posting on the Newcastle event’s page and urging those who attended to “make it an annual celebration of our freedoms and our democracy”. 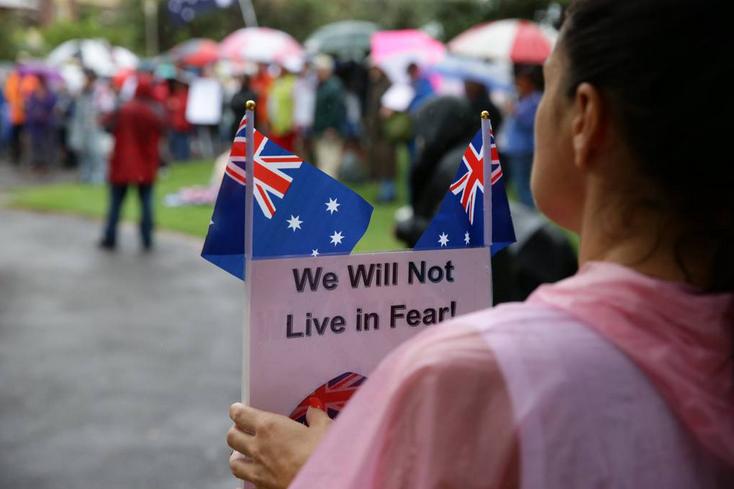 In Newcastle, Australia’s hard working port since 1804, despite heavy Easter rain and a counter-protest on the other side of a perimeter of police, organisers said they were happy with a crowd they estimated at about 300 people in the city’s Pacific Park.

“It was the peaceful rally we claimed it would be, we had people from all races and there were children running around.  We’ve obviously proven we are peaceful, concerned Australians from cross-section of the community [and] we are going to do it again.

The majority of people there were elderly grandparents, and we even had some kids running around. At no time has the Reclaim Australia rally been anything but everyday Australians…we are first and foremost against extremism in all forms.”

After organisers dubbed the group’s Saturday protest a success, Reclaim Australia is planning to rally again across regional New South Wales in Newcastle, The Hunter, in Taree and in Dubbo.  Such is the local understanding, concern and support for Reclaim Australia. 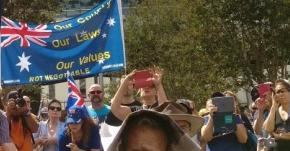 But what did the pro-Muslim leftists have to say about Australians defending Australian culture?

“You’re all a pack of Hitler Nazis you scum!”

Victoria’s main Muslim body has lashed out at the federal government over the Reclaim Australia rallies that sparked angry scenes in Melbourne at the weekend.

The Islamic Council of Victoria has since come out condemning the right of Australians to question Islam in Australia.  The council’s president Ghaith Krayem said “We are here to stay”. “The commonwealth should have banned the protests.” (like they do in Saudi Arabia).

And Labor’s socialist left sent in their best anarchists to throw horse poo at the protest:

Apparently the anarchist poochucker is an associate of Labor’s Tanya Plibersek.

And the Leftist media response to the rallies?

Well, Aussie taxpayer-funded Mark Scott’s ABC sought out opposition to the rallies to denounce them as ‘racist’.  The ABC sought out Labor’s Bill Shorten to denounce the Australian protests against Islamisation as “unfounded”. “This idea somehow that there’s a big conspiracy amongst the Muslim minority to bring in sharia law is just completely exaggerated. I think it is really wrong to tar everyone in a minority with the view.”

Shorten was part of Rudd-Gillard Labor (2007-2013) who embraced the Muslim minority into Australia with plans for them to become a majority. It was a carbon copy of Tony Blair’s Labour Britain before it (1997-2007) – always about increasing the ethnic vote to a socialist Labor.

The ABC sought out Perth Catholic Archbishop supporting an Iranian asylum seekers and preaching tolerance.  ABC’s anarchist leftist Q&A propaganda host Tony Jones offered up Left-wing Guardian columnist Van Badham to denounce the rallies as fascist nazism from the 1930s.  We await networking anarchist @ndy Phlegming to be on the Q&A panel without dark sunglasses and a hood.  Come on Tony! 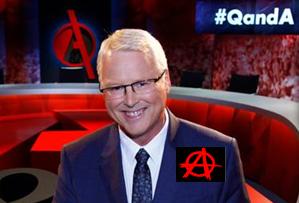 Tony. It’s Time to fess up to your Anarchism!

And the Aussie taxpayer-funded multicultural SBS (controlled by muslim boss Michael Ebeid) reported on its racist ‘Backburner’ programme the rallies as satirical ‘comedy’:  “An attempted bigot convention has gone awry over the weekend as attempts to ‘Reclaim Australia’ have led to hate groups accidentally reclaiming the fascist rhetoric of the rise of the Third Reich.”

Why do we pay our taxes to fund this lot?

Who could be the mastermind behind the Leftist/Socialist/Anarchist counter protests co-ordinated nationally, with thousands armed with fully funded protest banners, red flags and with full media coverage timed for national prime time TV to the masses? 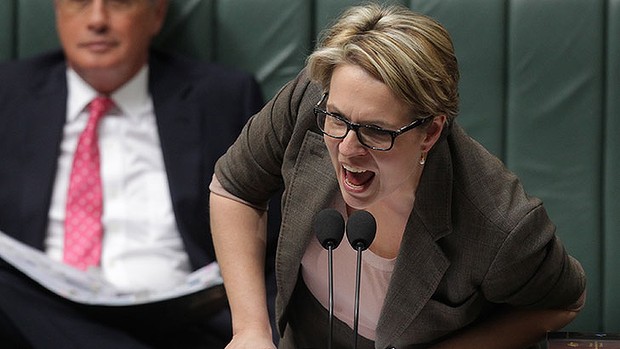 Bill Shorten is a seat warming puppet until her time comes.

The extreme leftist doctrine of ‘compulsory multiculturalism‘, introduced first into Australia by Gough Whitlam and Malcolm Fraser and imposed undemocratically upon Australians has caused a world of hurt in our capital cities.

Multiculturalism is not the inclusive, diverse society spin that the Left keep bleating in the media.  It is the exact opposite. It invites incompatible cultures into the same space and demands, indeed legislates, that locals must tolerate the new comers even though the newcomers reject the local culture and are instead encouraged by a communal government mindset to retain their own culture.  As the newcomers breed, they become the new locals and the retention of culture by their parents, becomes the local culture imposed upon the original locals   Mutliculturalism fuels social conflict as the incompatible cultures resist each other and conflict.  It is a form of unarmed invasion.

The doctrine of multiculturalism has openly and unquestioningly invited and embraced the world’s cultures to co-exist within Australian society, granted more rights than native Australians.   Multiculturalism says ignore the local traditional culture and the traditional hard-fought values of Australians. Bring your own. Don’t assimilate, but set up your own ghettos with your own rules.  Backward cultures from the Third World have arrived with their backward baggage, their attitudes towards women and caused a wave of ethnic crime across the places they settle – our capital cities – Sydney, Melbourne, Brisbane, Perth.

Multiculturalism has failed when imposed by socialists in Britain (Tony Blair), Europe (in Ireland, Belgium, France, Sweden, Norway, Germany, Netherlands, Denmark) and in America (Bill Clinton, Barrack Obama).  It has failed in Australia under socialists within Labor/Greens and the Liberals.  It is bloody wrong.  Whitlam and Fraser need to be historically condemned for the social cancer they have spread inter-generationally across mainly urban Australia. Regional Australia is still not a wake up.

Under Whitlam and Fraser, multiculturalism imposed on Australians, mass numbers of Asians, many of whom were either Christian, Buddhist or Hindu.  There was no assimilation like under the post-World War II immigration programme, where newcomers had to earn their keep and assimilate – speak English, mix with Australians, achieve useful employment skills and work for a living.   Under Whitlam and Fraser alike, the Asian newcomers got welfare, funded by yours truly.

So the Asian wave became an economic burden and a social burden on Australian in our capital cities.  In Sydney, the suburbs of Auburn, Liverpool, Fairfield and Epping saw masses of Asians displace Australians in both residential and retail business ownership.  Multiculturalism is compulsory.  Crime in South West soared and Australia had its first political assassination. In 1994, Vietnamese immigrant Phuong Canh Ngo arranged the assassination of Australian MP John Newman.  Melbourne, Brisbane and Perth have copped ethnic violence themselves.

Two generations later, open-door immigration from the Arab Middle East coupled with compulsory multiculturalism has seen the impost of Islam, Sharia, Halal – all wholly anti-Christian and completely anti-Australian.  But between 2007 and 2013, Labor’s PM Kevin Rudd and PM Julia Gillard embraced their kind and the cultural conflicts have exponentially worsened.

For the first time in our recent history, Australians have now been exposed to drive by shootings, forced marriages, widespread pedophilia, jihad, hostage sieges, attacks on our police and service people, foiled beheading and bombing attempts, here on our own soil.  Our own proud military and service men and women are told they can no longer wear their national uniform in public because of security issues linked to only ONE group—the so called “radicals of Islam”.

Ordinary Australians have had a gut full of the foreign impost trying to change our way of life, threatening our rights and telling us we are racists if we don’t embrace Islam, Halal and Sharia Law.

Australia is a nation for Australians and for those we invite to be Australians.