The Easter weekend is a traditional Christian time of reflection and holiday in Australia.  Public holidays are a critical exponent of Australian cultural values. Traditionally in Australia, business shut out of cultural respect just like on Christmas Day and other public holidays like ANZAC Day.  So stock up and have time with family.  A few days closure won’t bankrupt business.

But if businesses choose to open, then the employees foregoing their right to enjoy a public holiday deserves to be duly compensated by the employer by way of paying penalty rates. Else just stay closed.

Essential government employees like nurses, police and fire fighters, whose work on the day is essential, and rightly entitled to higher wages on public holidays and after hours.  Australian tax payers happily fund the extra cost.  It is the decent thing to do.  It is part of Australian values standards.

The Australian Chamber of Commerce and Industry says many businesses in retail and hospitality will close for the whole long weekend because it is too ­expensive to pay staff.

No problem.  Have a holiday. Write a blog. 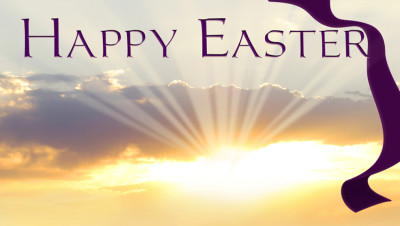 But the Australian Chamber of Commerce and Industry (ACCI) wants its cake and eat it.  It wants to encourage businesses to trade and not pay penalty rates to staff – so effectively push for slave labour.

Australians are being subjected to a false and misleading campaign about penalty rates by employer groups in the lead up to Easter.

Despite no evidence to support their claims, employers in the growing sectors of retail and hospitality are calling for penalty rates for working over the Easter break to be cut, citing undue pressure on business.  Good Friday (3 April) and Easter Monday (6 April) are national public holidays, with some states and territories also declaring Easter Saturday and/or Easter Sunday public holidays.

Australians overwhelmingly support workers being paid penalty rates when they give up their weekends, nights and public holidays.

Yet the greedy Australian Chamber of Commerce and Industry has launched a national ­campaign to unravel Australia’s hard-fought penalty rates for staff working when everyone else is on holiday. 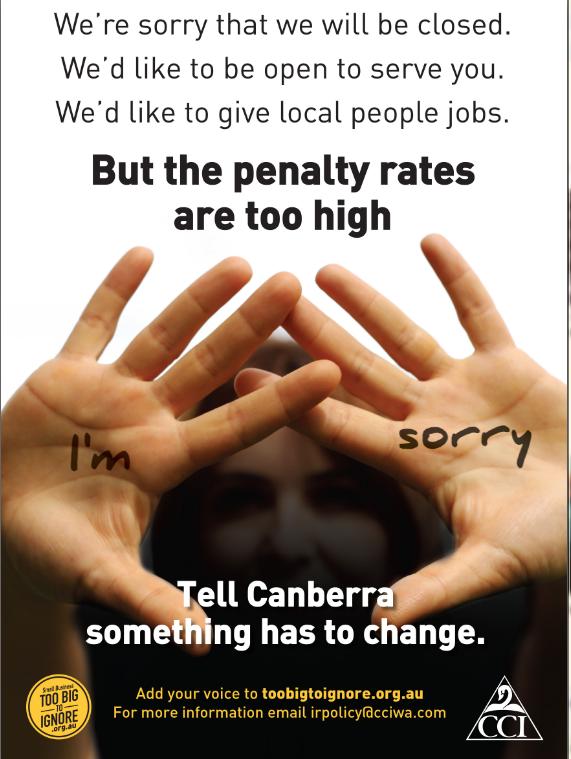 ACCI’s claims on its website that its focus is:

“the promotion of a world-class environment for doing business in Australia which encourages private sector investment, entrepreneurship and lifts community living standards. We aim to foster a dynamic and competitive private sector driven by the ambition and entrepreneurship of business people, employees and independent contractors as they are essential elements of a prosperous and fair society.”

So it wants to lift Australian community living standards and foster a fair society by underpaying employees so that employers profit from underpaid staff. To big to ignore?  Try, just greedy.  Its greedy attitude and disrespect for Australian workers need to change.

If employees want to work more hours, the Australian Government needs to remove the double tax penalty on having a second job and not expect employers to find more hours of work for staff.

Businesses are not allowed to pay lower rates.  It is called Third World scab labour.

What employer groups fail to mention is that paying workers penalty rates for working over Easter benefits businesses long-term as it will increase disposable income for some of the country’s lowest paid workers which, in turn, will be spent in local businesses.  Even if most retail and hospitality employees worked a full-time week at double time for every hour worked, they would still be paid less than full-time average weekly total earnings.

Victoria’s hospitality industry is crying poor about Easter Sunday being a public holiday, claiming “it will cripple some businesses“.  So cafes, restaurants and wineries if they choose to ignore the holiday and open, will have to compensate staff by paying double time and a half to work.

Opposition Leader Matthew Guy said some businesses had told him the wages bill will be so big they may not open.

Easter Sunday is no ordinary Sunday and if you work that day then you ought to be appropriately compensated for it.  If businesses can’t make a profit on the day, stay closed. Have an Easter egg with family.

Talk of penalty rates “crippling” business is fear mongering crap.  If businesses can’t generate enough revenue on public holidays because there aren’t enough customers, then don’t open.  Take a holiday.  Customers will be back after the holiday period.

And the Australian Government should be imposing the same taxes like GST on Internet purchases if it was serious about protecting the markets of Australian small businesses.  Both Labor and Liberal need to explain that one.

But ACCI chief executive Kate Carnell claims Easter and public holiday penalty rates for staff required to work is outdated.   So would Kate Carnell work night shift and Sundays for the average wage? 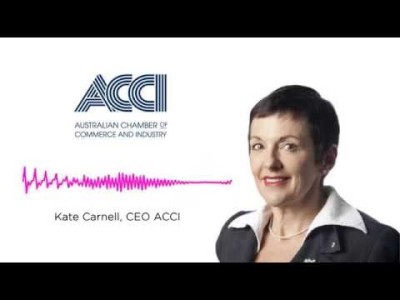 If industry had its way, Australia’s hard-fought dozen or so annual public holidays would not exist and so staff would work weekend and nights like during the industrial Dickensian 19th Century. 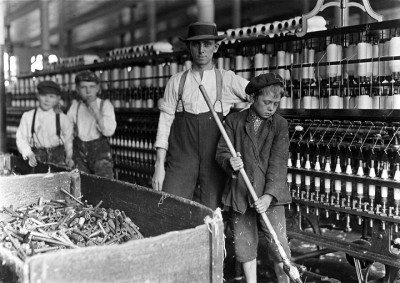 The Eight Hour Day in the state of Victoria came about after industrial action taken by stonemasons on 21 April 1856 led to the establishment and maintenance of the Eight Hour Day, recognised internationally as a world first.

In this Victoria, our dear land,
The first that dared be free,
To show the world what freedom meant
In new lands ‘cross the sea

‘The Eight Hour Day‘ has became a symbol of the rights of workers to organise to achieve their rights not only as workers, but as citizens in our democratic society.  Our politicians an employers mealy mouth about work/life balance and do squat.  Australia is a First World nation not by luck or co-incidence, but thanks to the many struggles by our forefathers building our great fair nation.  We are not a Bangladesh and greedy employers need to pull their heads in. 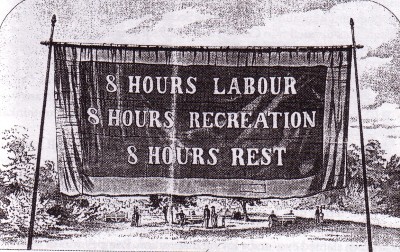 David O’Byrne from the union representing hospitality workers, United Voice, said most businesses were operating on healthy profit margins and workers should be paid for sacrificing family time.

“Hospitality workers earn low wages and a fair proportion of their take-home pay is made up of those weekend and penalty rates,” Mr O’Byrne said.

In the 6 months leading up to December 2014, supermarket giant Coles made $895 million in pure profit. Despite this, Coles are trying to impose a workplace agreement that would ‘standardise’ conditions and see newly employed butchers, meat packers and cabinet attendants paid up to $12,500 less a year.

Perhaps worst of all these moves are being supported by the right-wing Shop, Distributive and Allied Employees Association (SDA). The SDA is in reality a ‘yellow union’ that is in the pocket of the big retail firms.

In exchange for sweetheart deals with the employers the SDA gets a large passive membership that allows them to exert undue influence in the Labor Party.

The meat workers union in Victoria is correctly opposing the Coles/SDA deal. They have been engaging in industrial action and calling on SDA members to vote no to the proposed agreement.   The meat workers union is instead demanding that shop attendants get the higher penalty rates in order to standardise conditions upwards. Coles could easily afford to such a modest pay rise. All Coles workers should vote no to the dodgy wage cutting agreement and fight for a real living wage. 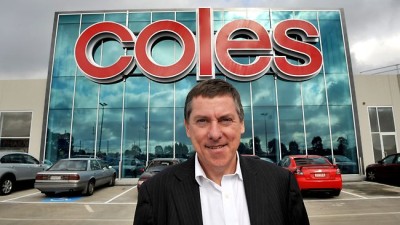 Food retailer and employer of young Australians, Bakers Delight, has attempted to lock its young workers into low pay under a new non union agreement. Workers could potentially receive no penalty rates on weekends or public holidays. A 16 year old could end up working just a 1.5 hour shift for as little as $13.35, barely enough to cover the cost of transport to and from work. 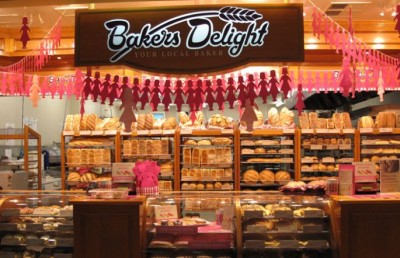 Franchise retailer, 7-Eleven, fails to pay penalty rates for working weekends, late nights and public holidays, has been caught paying below the legal minimum wage, prohibits breaks during shifts, and docks wages when cash registers don’t balance.   And if you work for 7-Eleven at its Springfield store in Brisbane, Indian boss Avinash Pratap Singh will throw metal chairs at you if you feel sick. 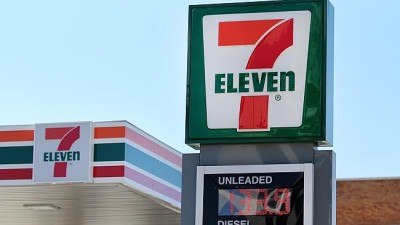 Meanwhile, South Australia last month removed penalty rates undoing a century of Australian workers fighting for decent wages. Its Labor Premier Jay Wetherill, is an unelected puppet of Labor’s faceless apparatchiks.  So much for the long and proud history of protecting the rights and conditions of working people  by the South Australian Branch of the Labor Party.

In Victoria, many employers in retail and fast-food are today ignoring Easter Sunday as public holiday and underpaying their staff just ordinary time rates.  Victoria’s largest union – the Shop, Distributive and Allied Employees Association – is urging the workplace watchdog, the Fair Work Ombudsman, to investigate claims employers are refusing to pay penalty rates this Easter Sunday.

Michael Donovan, of the association says, “Some of our members have been told they have to work on Easter Sunday and it’s not a public holiday … this is nonsense.”   He has written to the Fair Work Ombudsman and requested “widespread inspections” of scab workplaces.

What are penalty rates worth?

“While the rest of us wind down for the Easter break, millions of Australian workers will give up their family time and they should be compensated for that.  The business community, backed by the Abbott Government, are using the Easter break as justification to attack penalty rates by saying it’s unaffordable to hire more workers. The truth is the share of business income going to wages in retail and hospitality has fallen in recent years.

“There is no evidence this will create new jobs, but plenty of evidence it will hurt low-paid workers. We know most retail and hospitality workers are paid less than Full Time Average Weekly Total Earnings and working over the Easter break allows them extra disposable income to spend in shops and cafes – the very businesses that are driving this attack.

“Cutting penalty rates have nothing to do with job creation or productivity – it is about cutting people’s pay packets and disposable income.” 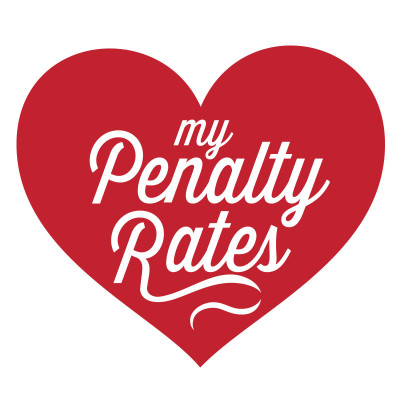