Not only have Liberal and Labor Party (LibLabs) destroyed the rights of Australian workers by removing unions and allowing workplace contracts, they encourage foreigners to take Australian jobs in the 457 Visa Scam.

Many anti-Australian employers are allowed to import foreign workers cheap on 457 visas, to take the place of decent Australians properly paid for a fair day’s work.  The rates are so low, these foreigners are basically coming into the country as slaves.

The 457 (replace Australians with cheap foreigners) visas were originally introduced by the Liberal Howard Government.   Howard welcomed in 30,000 of the scum a year to take our jobs instead of training up our own.

Fat greedy corporate miners like fat Gina No Heart, digging up Australian wealth couldn’t be arsed training their workforce, so they just bullied their Liberal mates in government to allow foreigners in.  It has all been about saving cash so that the greedy mining aristocrats can pocket more. 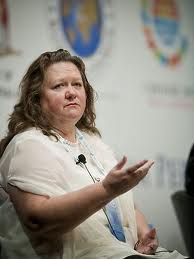 By 2011-12 under the Welsh Moll Gillard, foreigners on 457 have surged to 125,000.   So both under the Liberals and Labor, Australian workers have been sold out to foreigners.

In the construction industry, according to CFMEU National Secretary, Dave Noonan, more than 70,000 Aussie jobs have been lost, yet at the same time there has been a 36% increase in ethnic workers coming in under 457 visas.  Only last year in the building industry in Western Australia there was a case of a company fined $123,000 by the Federal Court for paying workers as little as $3 an hour.

If that isn’t a rort what is?

Go to a Grocon building site and it will be full of Pacific Islanders.  They’re not our fuckin cousins, bro!   And they’re birds of a feather – once these lot get seniority they get their own kind in to replace Australians on a work site. 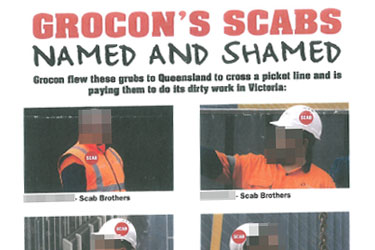 The national secretary of the Transport Workers Union, Tony Sheldon, said some companies were intent on bringing in workers on 457 visas because they wanted to exploit them.

“If you are trafficking people into this country to exploit them against the standards and ethics, and legal requirements of this country, the appropriate title is ‘human trafficking‘ ” he said.

Mr Sheldon said there had been numerous examples over recent years in which 457 visa holders were exploited, including cases where they were being “stuffed” into accommodation.

“The abuse of the 457 visa process is harming the community,” Mr Sheldon said.  “It’s simply a way for unscrupulous employers to bypass the local job market and escape their responsibilities to employ and train our children. And it is made worse by the fact that the 457 visa was leaving people highly vulnerable to exploitation.”

Foreigners on 457 visas have no right to criticise their employers when they are being ripped off or sweated, and no real right to join a union without the employer sacking them.  Once sacked, they can be deported within 28 days unless they can find another job.

How is this not slavery?  How is this representative of Australian workplace values?

Mr Sheldon backed calls by the Welsh Moll for a crackdown on 457 visas.  But she is so arrogantly up her own backside, she won’t listen to anyone but her minders emailing her more rhetoric speeches, and telling her how shiny her pearls are, or that she should revamp another one of her offices.

She’s come out calling for Australian workers to go to the front of the jobs queue, with foreigners to the back, but continues to permit the 457s to continue, and has turned her back on boat illegals now at a rate of 17,000 in 2012 and growing. 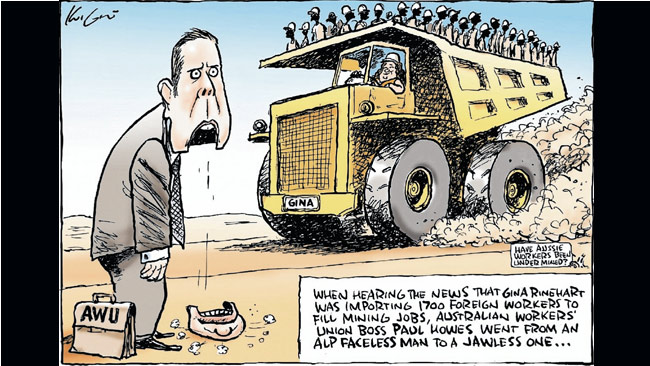 Then you have fuck-knuckle Steve Knott from the Australian Mines and Metals Association accusing Australians of being immobile by not wanting to relocate to Western Australia’s outback to be housed in shipping containers and forced to live on takeaways.

Welsh Moll could care less and Liberals Mad Monk Abbott won’t change the system if he wins office.  Egotist mining magnate Clive Palmer and his latest hair brain politics wants the government to allow illegals to fly to Australia to have their claims processed.

Gillard’s Fair Work Australia is a crock, fair in euphemism only.  Just one of the witch’s wasteful policies on the run.

The 457 visas need to be eliminated and employers taxed harder if they fail to train Australians to do Australian jobs. 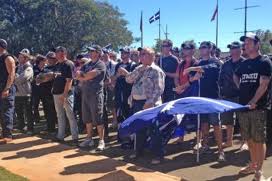