Today after our Australia Day Long Weekend for 2016, it’s fair time to ‘Chuck a Sickie‘ using up accrued sick leave for a Mental Health Day.  After all, our brain is a part of our physical being.

Whatever the justification, sickies are vital Aussie culture.  Australia is a First World decent nation, not some backward Turd World slave-driven sweat factory.  As Aussie workers, contracted or otherwise, we are all legally entitled to 10 days annual sick leave.

Throughout Australia, this is legally cumulative year-after year.  Untaken sick leave DOES in fact accrue across subsequent years if a worker doesn’t take it, despite what shonky greedy employers try to wrongly spin to save profit. 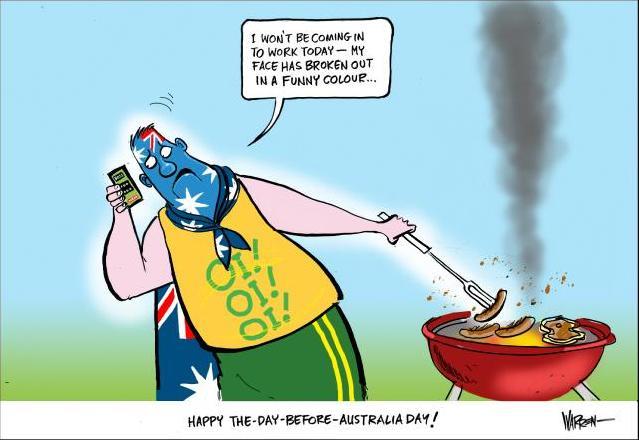 ..and the day after it was still healing…

Last year’s workplaces were wall-to-wall overwork and underpaid and this year is set to be no different.  So it is timely to dip into 10 days-a-year sick leave entitlements ahead of returning back to the grindstone of yet another year of long hours of working for the man. 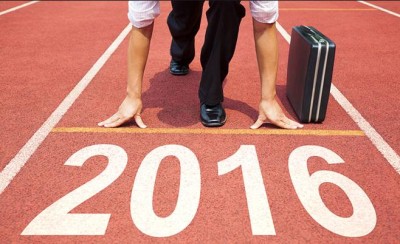 We’ll all be expected to hit the ground running again…next week.

Employer groups like the Business Council of Australia (BCA), Australian Industry Group (AIG), Australian Federation of Employers & Industries (AFEI), and the Australian Chamber of Commerce and Industry (ACCI) are critical of employees taking their full 10 days sick leave a year.

Well they can all pull their greedy heads in. Their member companies make enough during the year.  It’s simply maintaining worker Quid Pro Quo equity with all-powerful employers. 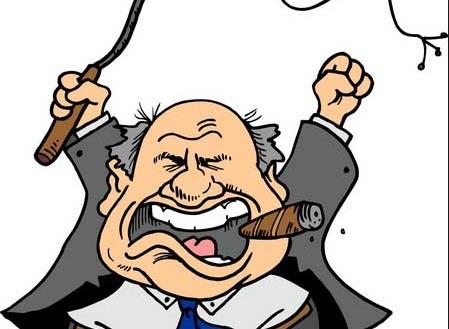 The protesting ACCI boss Kate Carnell can get as angry about worker sickies all she wants.  Carnell makes empty claims like:  “sickies kill business and impact the economy”, “this could have a very large impact on the economy if it’s not well-managed”.  “The impact of lots of people just taking the day off, an unplanned day, is huge.” 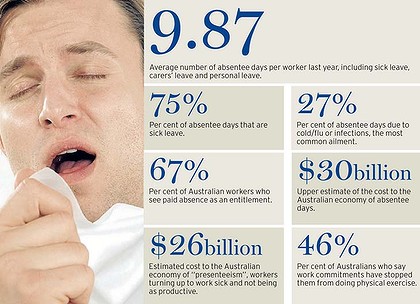 Company budgets allocate a certain portion of funds for leave including sick leave, so the company is not losing any money.

Aussie workers are not robots.  We are legally entitled to 10 days a year sick leave cumulative year-on-year, with or without a medical certificate.  Business can write as many onerous conditions of employment such as mandatory medical certificates all they like.

Australian GPs are pushing to scrap sick certificates for patients who have only one day off.  Australian doctors say the practice is a waste of their time and have slammed “demanding bosses” and unreasonable workplace policies.

Meanwhile, if you need a quick sick note, go to:  http://drsicknote.com.au/ 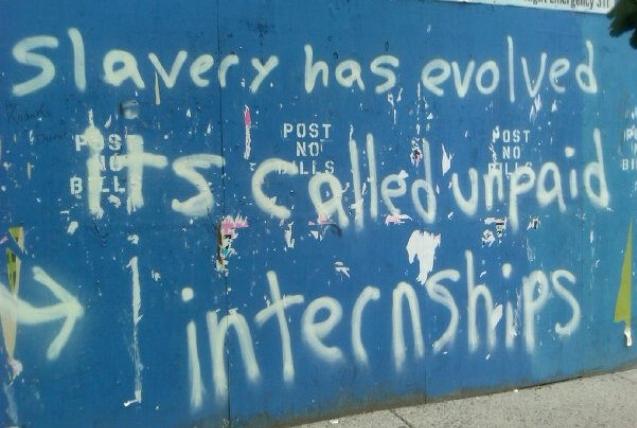 And the big employers aren’t exactly going without; just ask their dividend-rich shareholders.  The same greedy Dickensian shysters are lobbying to abolish worker after hours penalty rates.  If they could get away with it, they would abolish annual leave, long service leave and public holidays, the slave-driving bastards!

Australian employers already have degraded 20% of Australian workers from permanent workers to casuals so they can avoid paying leave entitlements. Casualization of labour by exploitative bosses is unAustralian.  It denies Aussies decent First World wage entitlements and security of tenure – such as rights to paid leave for sickness, rest and family.  One in five Australian workers are now casual without such leave rights.

READ MORE:  One in five Australian workers are casual employees.

Sickies are worker pay back!

Our great Australia Day Long Weekend this year is a ripper – four days from Saturday to Tuesday inclusive with a Monday sickie thrown in, and then a Wednesday sickie to top it off.  It’s like a double Chrissy.  What better way to recharge your batteries ahead of the year ahead?  Many employers have similarly take the long weekend as well.  They’d only become burnt out fools if they didn’t.

So today, Australian employers will be expecting a wave of phone calls from workers wanting to take a sick day.  They should all go through to voice mail. 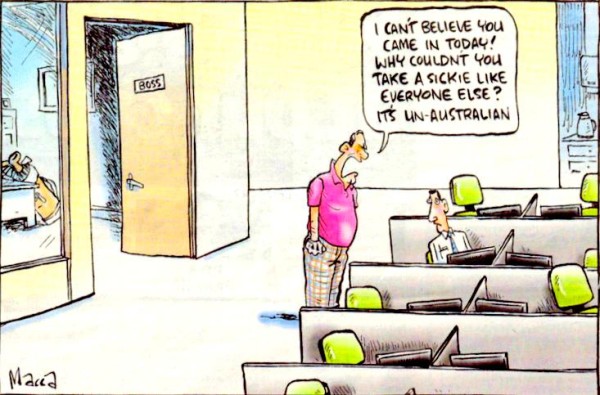 It’s official:  NOT chucking a sickie, either side of a long weekend, is unAustralian!

According to a ComPsych survey, 82 per cent of us have called in sick to work when we weren’t really physically ill.  So what?  It was a mental health day.

A recent Clipp.com survey has found that the most common day for people to “chuck a sickie” is the day after Australia Day.  This is followed by ANZAC Day and Melbourne Cup day (even outside Victoria) where 10 per cent of the workforce typically calls on sick leave the next morning.  It’s passive-aggressive assertion using up sick leave entitlement – ‘manspreading’ against exploitative bosses.  Smart men are more likely to chuck a sickie (17 per cent) compared to women (14 per cent), so come on ladies!

And it is nothing to do with feigning illness.  It is fundamentally about worker mental health.

Let’s be clear.  Employees can take leave for many reasons, including to go on a holiday, because they are sick or to take care of sick family members.  All employees in the Australian national workplace relations system are covered by the National Employment Standards (NES) regardless of award, registered agreement or employment contract that applies to them.

National Employment Standards (NES) prescribe ten minimum Australian employment entitlements that MUST be provided to all employees across Australia.  Sick leave is one of these, called ‘Personal carers leave and Compassionate Leave‘.  Aussie workers are entitled to 10 days a year sick leave.

It is all about respecting Australian workplace values. Australians are First World.  Since our British colonial inception of 1788, White Society on this Great Southern Land have always been a First World European outpost.  Our forefathers fought and died to defend our young and free nation. 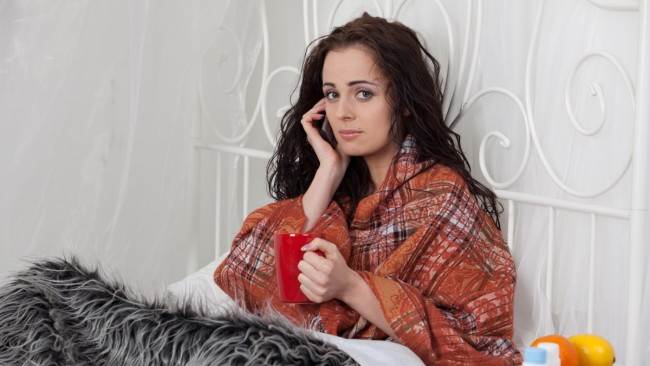 When work (and life’s) stresses become overwhelming, we take a day off. There’s more to life than ‘work-work-work’ make boss richer crap.

Australian worker entitlements are enshrined in our national Fair Work Act 2009 (Cth).  This is to prevent some scum foreign employer thinking they can get away with Turd World slave labour here.  Think again slave-driving scumbags!

This 10 days annual sick leave entitlement for each worker accrues on a regular basis at the rate of just over one sick day for each month worked.  Sick leave can be used when:

The leave entitlement keeps accruing for as long as the employee works for the same employer.  Reasonably, untaken leave is not paid out on termination of employment.

The Australian tradition of “chucking a sickie” is to recharge your mind – call it a “Mental Health Day”.  Medical experts say in order to remain productive and perform, workers should take one up to three times a year.  It’s mental recharging.

“Traditionally employers have focused on physical health. While this is a key obligation, under Worksafe it’s also essential to consider psychological wellbeing. One in five Australians will experience mental health issues in their lifetime,” Dr Sullivan says.

“A Mental Health Day is a fantastic initiative that works to reduce the stigma around mental health issues, increase community knowledge and promote mental wellbeing.”

Refugee lawyer, Natalie Young, 29, from Paddington in Sydney’s East, says even with flexible working conditions that accommodate study, sickness or compassionate reasons are written into contracts, sometimes you still need that last-minute day off.

“I pulled a sickie last week. I also study my Masters part-time and had an assignment due. With work, university and social commitments, the stress of keeping up with it all became too much.

“I called in sick to finish the essay, so it wasn’t like I was slacking off. Though by the afternoon, I did treat myself to some ‘me’ time with a long run through Centennial Park. I work hard and long hours and am committed to my work, so while I did experience pangs of guilt, I felt I was entitled to it,” says Young.

In the US, major corporations like Google and General Electric agree, encouraging staff to take “Mental Health Days”, while the UK has a more relaxed approach, calling them “duvet (doona) days”, those mornings when you just can’t get out of bed for the commute.

Small business owner Luke Russell, who runs Altitude IT, with his wife Kellen, a Sydney-based IT firm with six employees and over 200 clients on the books, is making headway when it comes to mental health.

Russell, 34, from Neutral Bay on Sydney’s Lower North Shore says, “Whatever you want to call it, I don’t see why taking the odd day off to recharge shouldn’t be counted as sick leave. The repercussions of stress in the workplace are no different from a physical illness. An employee is going to be less productive and “infect” other staff if they are stressed and unhappy.”

Russell admits this flexible approach might work for small operations, but may be difficult to monitor at larger corporations.

“We’re a small company built on trust and reliance with our staff so it’s easy to allow days off without worrying they are pulling our leg. If our employees need a day to chill, then they have one. I might even join them for a therapeutic beer,” he says.

Sickies are a worker right.  They are vitally healing, a reward.  Never feel guilty. Your employer never feels any sense of guilt when discreetly deducting annual sick leave entitlements in small weekly/fortnightly increments over the year.

“The problem is with business. Most people I think wouldn’t care about burning annual leave but like many others .. i applied for annual leave and it was rejected due to the company needing me.   Big business doesn’t give a rats ass about its employees there a number.” 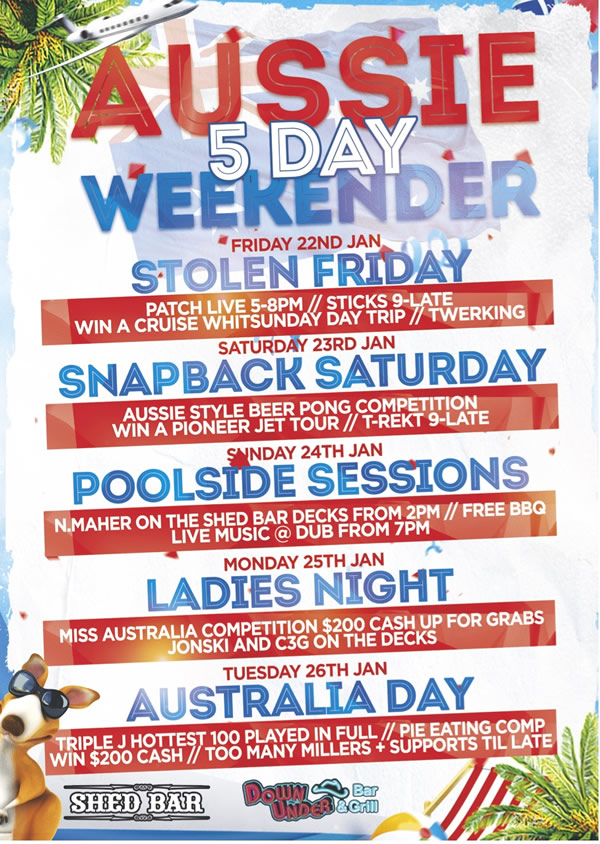