Why should Ordinary Australians pay full tax when big business and multinationals avoid their fair share?

The Tax Office is always going after the little guy to squeeze pittance out of Aussie battlers – tradies and those running small business.   The Tax Office cries poor about the cash economy because it is missing out on tax revenue.  It seeks the moral high ground, complaining about lost revenue impacting on all Australians by reducing the amount of money available to fund community services such as health, education and other government programs.

But it’s all crap.

Ordinary Australians don’t have access to offshore tax havens to hide their income from the Tax Office.   So what is wrong the little guy doing a bit of cash-in-hand, when the government lets big business get away with billions in tax evasion, and when government fritters and wastes billions of our taxes on foreigners overseas instead of on needy Australians? 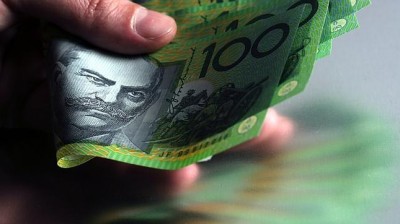 Better in my pocket that in the government’s coffers

But big business and high net worth individuals are the big tax thieves.  In one year (2006) the flow of money from tax havens to Australia was $8.4 billion.  That’s not pittance.  That’s the annual budgeted cost of the proposal to add Denticare to Medicare to enable Australians to access $1000 worth of dental care every two years.

Despite talk fests by the G20 of a global crackdown on corporate tax avoidance, 60 per cent of Australia’s top ASX 200 listed companies hold subsidiaries in tax havens or low-tax jurisdictions.   Those companies that promised to get out of tax havens have actually added to their offshore subsidiaries.

Big business artificially creates subsidiary companies in tax havens and under permissible “thin capitalisation”, transfer mispricing and other creative accounting techniques, shifts debt to their Australian operations while shifting profit-earning to the havens, all purely to avoid tax liabilities in Australia.

And the Tax Offices let’s ’em.

Several big-name companies, such as 21st Century Fox, Westfield, Toll Holdings and Telstra, have more than 40 entities in well-known tax havens such as the Cayman Islands, Luxembourg, the British Virgin Islands and Bermuda, a report by the Tax Justice Network shows.

Just look at the bastards! 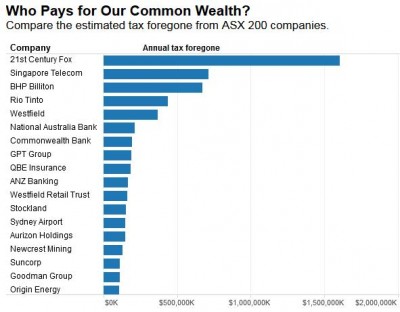 “Secrecy jurisdictions” such as Singapore and Hong Kong top the preferred taxed haven list.   It’s big time tax evasion!   Why does Australia deal with these countries? 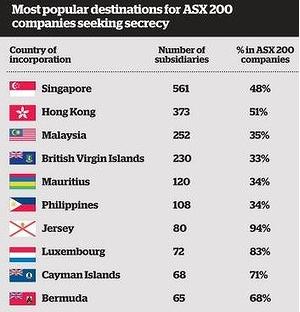 Commonwealth Bank appears to have extended its network of haven companies, with a subsidiary in the Caribbean tax haven, the Cayman Islands, as well as two other entities in Luxembourg and Bermuda (both tax havens).   In 2014, Telstra added eight more subsidiaries in secrecy jurisdictions since last year.  Westfield has 30 subsidiaries in Jersey (a classic tax haven).   Rupert Murdoch’s 21st Century Fox has 117 subsidiaries and logistics group Toll Holdings 72 in low-tax jurisdictions, including Bermuda, the British Virgin Islands and in Singapore.

Tax minimisation by large companies far outweighs that of small and medium-sized businesses and has a disproportionately large effect on eroding the tax base.

So the Tax Office needs to get real and stop targeting the little guy.

Ordinary Working Australians across the country are doing all the heavy-lifting because many of our biggest companies are shirking their responsibilities and it’s costing all of us billions of dollars a year.

The Tax Justice Network and United Voice will call for a parliamentary inquiry into the corporate tax take after briefing federal MPs.

Yet, while the tax office continues to let big business off scott free for billions in tax avoidance, it spends much of its time cracking down on the cash economy of small business.   The Tax Office has ramped up its audits of small businesses particularly cafes, the building trade and couriers.   It is going after the under $50 cash payments using its data-matching system and a team of forty investigation officers.

Perhaps one upside is that the Tax Office has recruited Chinese and Thai  speaking staff to audit 168 foreign businesses in the cafe, restaurant, catering and takeaway industry in Sydney’s Chinese enclave of Haymarket.   It has also identified foreign restaurants in Melbourne’s Lygon Street in Carlton,  Northbridge in inner Perth, and Fortitude ­Valley in central Brisbane. 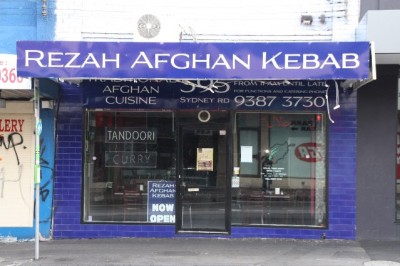 Most foreign-owned food outlets trade Cash Only (i.e. no eftpos) and they’ve been getting away with not declaring most of their income for as long as they have been in Australia.    The tax Office estimates the scale of the tax evasion is as many as 40,000 businesses.

And many of these ethnic businesses under pay their staff also Cash Only.  The worst conditions appear to be at Chinese and Japanese restaurants, where owners blatantly advertise for workers at pay far below the minimum wage, which is $15.96 an hour.

At other restaurants, staff who complained about wages were either sacked or gradually taken off rosters;  restaurants are putting young or international student workers on day-long or one-week ”trials” that are never paid for.

In Sydney, 43 restaurants are known to pay below the minimum wage, with some as low as $8 an hour.   On the Japanese entertainment website Cheers, scores of restaurants blatantly advertise for waitresses and kitchen hands below the award wage.  Shogun restaurant in Macleay Street, Potts Point, advertises for a waitress at $9 an hour ”plus tip”.

No wonder so many asians in Australia are driving expensive cars. 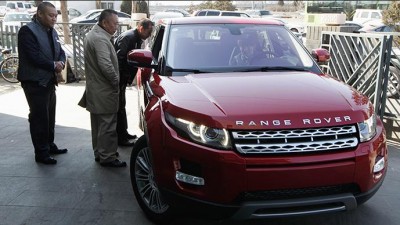