Anarchists are increasingly becoming more violent and networking with other extreme Leftists types using protest tactics such as ‘black bloc‘ – gang riots where participants wear all-black clothing including face-concealing masks.  They target central business districts, vandalising and setting fire to shops and vehicles, and even target police themselves.

G20 summits have typically been targeted by Anarchists and Antifa using the recognisable circled ‘A’ and carrying black and red flags. 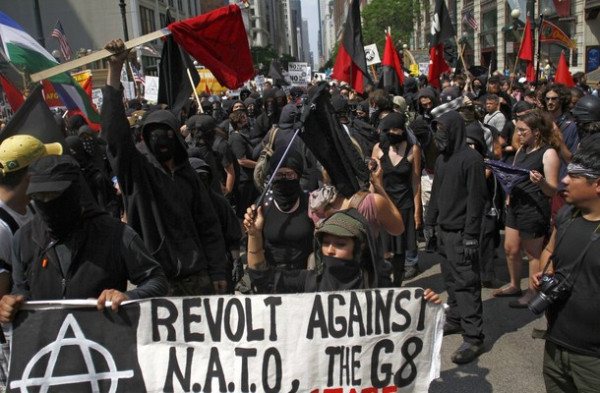 So what are the Antifa Anarchists plotting for Australia’s G20 Summit in Brisbane in just three months time?

Antifa Anarchists have form, linking up with its Leftist network – Socialist Alliance, Socialist Alternative.  On May 19, 2014, the Socialist Alliance mobbed former Liberal MP Sophie Mirabella during a Melbourne University lecture.  Online footage of the incident shows the former federal Liberal MP struggling to move through a mob of students who were protesting and chanting on megaphones and who proceeded to encircle Ms Mirabella. 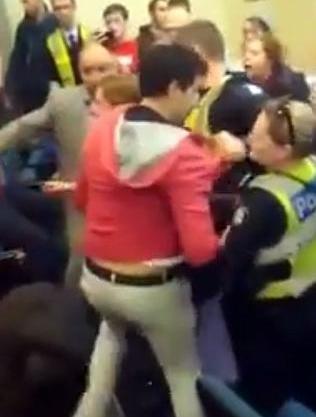 The Socialist Alliance abused and assaulted Australia’s Foreign Minister Julie Bishop on May 18, 2014 at the University of Sydney, in which about twenty protesters jostling, hitting and heckling her.

Days later on May 22, Anarchists were arrested for affray by police at a Liberal Party Club debate at the same university. 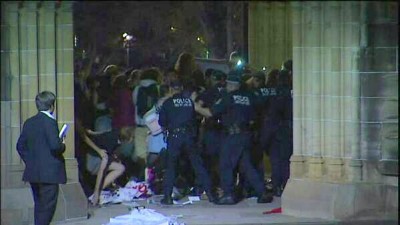 Previously on December 17, 2013 Antifa set off an explosive device at the home of a Sweden Democrat politician in the Swedish city of Malmö.  It was a reprisal attack simply for describing Islam as a “totalitarian ideology”.   Criminal identity Martin Frederiksson is suspected to be linked to the bombing. 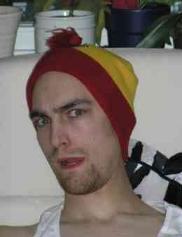 On November 24 2009, in Chicago Illinois USA, members of Chicago Antifa were arrested at a lecture at the Edelweiss restaurant by the British Historian David Irving.  While the guests present for the event were in the midst of ordering their meals, a group of mask clad Antifa Anarchists stormed the restaurant dressed in black, assaulting patrons and vandalising the restaurant – standard ‘black bloc‘ tactics.

During the melee members of Antifa attacked the restaurant staff along with a number of guests and tables with cans of paint.  Five Antifa members were sentenced to prison for the melee and a sixth is awaiting trial.

The Cook County Sherif’s Department (Chicago, IL) formally classified the group as a criminal “Anarchist Gang.” They have claimed responsibility for many other acts of criminal violence in other American cities as well. The brother of one of the men sentenced to prison in the Chicago restaurant attack has also been convicted of criminal computer hacking in the past. The father of the two brothers is also currently in prison for child molestation. The father is described by anti-racist sites as also a long time activist and credited with getting his two sons involved. 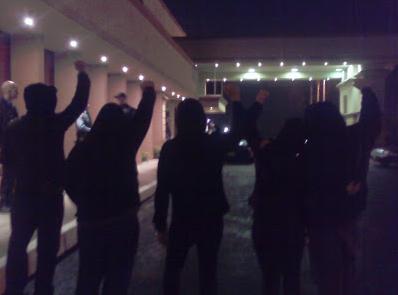 On May 1, 2014, Antifa in Britain mailed two suspicious packages by post to the UK Independence Party, UKIP.   The parcels were intercepted at the Royal Mail sorting centre in Peterborough, East England and bomb disposal unit alerted.

On May 11, 2010 in Sydney’s west, a Mazda 626 was found driven through the front foyer area of the Construction, Forestry, Mining and Energy Union (CFMEU) offices, filled with drums of petrol and set alight.   Links have been made to Antifa concerning an internal dispute with the union.

Antifa has also been blamed for the bombing of the Greek Golden Dawn office in north-eastern Athens suburb of Aspropyrgos on December 4, 2012.   The explosion was caused by a home-made explosive device that appeared to contain dynamite.

On November 1, 2013, Golden Dawn members Giorgos Fountoulis and Manos Kapelonis were assassinated in a motorcycle shooting by Anarchist terrorist group, The Fighting People’s Revolutionary, just outside the party’s offices in the northern Athens suburb of Neo Irakleio.

On May 3, 2014 Antifa Anarchists linked up with the militant CFMEU in the Brisbane CBD to violently protest against Australia First Party’s support for Golden Dawn. 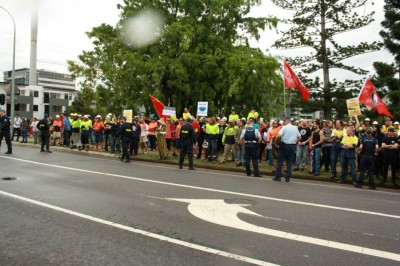 In Brisbane this week, a large stash of chemical bomb-making equipment was discovered at an outer suburban property.

A Newcastle man Daniel Fing, 30, and a still unidentified woman in her 30s used false names had rented a five bedroom home at 117 Red Cedar Road, Pullenvale in outer western Brisbane since December 2013.  The pair had arrived in Brisbane from Sydney, but vacated the property recently when they fell behind in rent.  Perhaps they had previous form in Sydney as squatters.

On August 13 2o14, Australia’s Queensland Police Service (QPS) were tipped off by a real estate agent for the rental property who became suspicious of a package with dangerous labelling in the garage.  A lucky find.

Mr Fing had left the property some time before the agent’s visit.   He is alleged to have stolen a Navy diver’s identity in order to rent the house.

Police discovered in the recently vacated house and garage a large quantity of dangerous chemicals which combined are used to make explosives.   Police say the man has considerable skill with explosives and confirm that his stockpile of chemicals was not amateurish.

Acting Inspector Mark Bradford said there was a large quantity of chemicals and equipment.  “The set-up of the shed is certainly of sophistication,” he said.  “It’s not something that – for want of a better word – a backyard set-up.”

Explosives similar to those used in the 2005 London tube bombings and maps possibly targeting two Sydney CBD locations were uncovered in a ­suburban home.  The haul of explosives included 22 litres of liquid highly explosive material triacetone triperoxide (TATP), which is favoured by ­terrorists and was used in the ­London attacks because it can create a military grade explosive.  TATP has been used by suicide bombers in Israel, and was chosen as a detonator in 2001 by the thwarted “shoe bomber” Richard Reid.

Police called in the expert bomb squad, who ordered the evacuation of surrounding residents and then executed 17 controlled detonations of the bomb-making material.

New South Wales has now arrested Fing on unrelated matters. The woman’s location is not known. 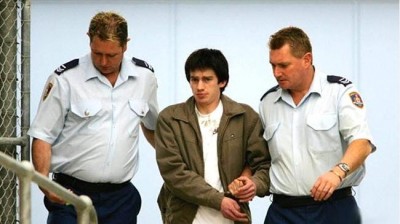 Fing has form in the use of explosives.  On June 1 2006, Fing detonated an improvised explosive device (IED) under the Holden Commodore of his girlfriend’s lover in the car park of Belmont McDonald’s in Newcastle.  The IED detonated when the man reversed out of his park, and was found to contain triacetone triperoxide (TATP). The man escaped but his Commodore and a second car were destroyed.  Fing was convicted in 2008. 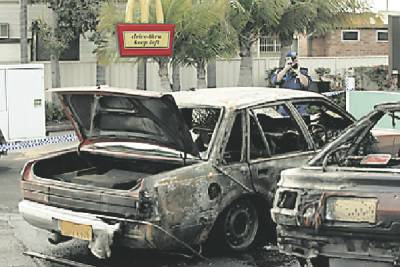 After his release in 2011, Fing survived a drive-by shooting when a gunman allegedly opened fire at his home in Belmont, NSW.   The man charged with Mr Fing’s attempted murder was later found not guilty.   Then in 2012 Fing was charged with wounding, assault, weapon and drug possession and is due to face a Newcastle court on August 27 2014.

So are these two Sydney residents linked to extremists?  Are these two linked to Leftist groups like Antifa?  Why did a Sydney pair set up a bomb-making operation in Brisbane just before the G20 Summit?

Police said that finding a cache of sophisticated explosives enough to blow up a city building was really worrying, especially just months before the G20 at the Brisbane Convention & Exhibition Centre.

‘G20’ is the Group of Twenty, which since 1999 has been a global annual finance forum for the governments and central bank governors from 20 major economic nations.  The G20 decisions have significant global influence and the G20 attracts global media attention.   It is this global media attention, irrespective of the forum’s agenda, that attracts protests by Leftists and anti-establishment groups like Antifa Anarchists to disrupt for disruption sake.

The 2010 G-20 Toronto Summit in Canada for instance saw protests descend into riots and become hijacked by Antifa Anarchists deploying their familiar ‘black bloc‘ tactics. They caused extensive vandalism to several businesses in Downtown Toronto. More than 20,000 police, military, and security personnel were involved in policing the protests, which at its largest numbered 10,000 protestors.  While there were no deaths, 75 officers were injured.  Over 1000 arrests were made, making it the largest number of mass arrest in Canadian history. 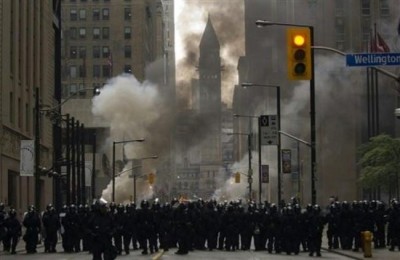 The 2014 G-20 Australia summit will be the 9th forum of G-20 heads of government. It will be held in two locations.  A private finance meeting will be held on 20-21 September 20 and 21, 2014 in Cairns likely at the Pullman Cairns International Hotel; then the main forum in Brisbane on November, 15 and 16, 2014 confirmed at the Brisbane Convention & Exhibition Centre.

The Queensland Police Service says it is prepared.  Assistant police commissioner Katarina Carroll says at this stage, no names have been put on the prohibited persons list for the summit.

However, she says community liaison is an important part of their role.  “We’ll have negotiators allocated to each of the protest groups and some of those have been very forthcoming and very involved, and obviously some of those not so,” she said.  “Even if that is the case though, we’re reaching out to all protest groups.  “It’s very, very important for us to develop a trust with these groups.”

The underground Slackbastard blogsite continues to be a voice for Antifa Anarchists in urban Australia’s Melbourne, Sydney, Perth and Brisbane.