We link through to an interview done by our party president with the Ukrainian nationalist magazine.
The text of the interview in English is provided below.
Readers will excuse the imperfect English on the interviewer.

1. When was your party founded?  What are its goal and tasks?

“Australia First Party has a long history. The first version of the party was founded in 1996 and it fragmented in 2007. The party was reformed at once and soon after registered as a party. The party also inherits the long history of nationalist struggle back over several decades in terms of ideology and some personnel. The party seeks to unite all nationalist and patriotic forces. Our goals are set out in our Electoral And Community Programme. We argue for an independent Australia, with its wealth under Australian not globalist capitalist control, a country based upon our European culture and its singular nativist identity.

2. How exactly does your party participate in the political processes taking place in Australia?

Australia First Party does contest elections. In the last few years we have contested local and Federal government elections under our party name. We have performed better at local polls where people feel more willing to cast a vote for a party always called ‘extremist’ in our media. A few precise scores are 9.55%, 9.37%, 7.1%, 6%, 5.27% and so on, at different times and places. There is a small but growing clientele for nationalism. But our party also builds a number of community based campaigns – on land ownership, refugees, housing and other issues, co-organizes forums and other ideological-cultural events. Our party temporarily has lost its Federal registration, but we are confident of regaining that very shortly. We are registered to contest local elections.

3. How divided are sympathies of Australians for different political directions?  Which party is most supported?

Australia’s formal politics is increasingly the province of two interchangeable parties. Some people imagine them to be different but essentially they are the same in practise. There is a great political ferment with all sorts of new parties coming into existence. Some of these parties are about environmental questions, others about tax reform. The Left here is very weak but it still a street power and it tries to intimidate patriotic and nationalist people.. A number of supposedly patriotic groups have come into existence but many support odd foreign policy objectives that involve them supporting Israel (perhaps this is a reflex of the national debate over Islamic terrorism).

4. According to what criteria do Australians evaluate the success/failure of the current ruling party?

System politics is all about economic management as a general rule. Sometimes, it focuses on fixed agendas such as border security. It is the same as Western European politics. The pendulum swings backwards and forwards between the two parties. It is a fraudulent politics.

5. In Europe from time to time there is interest in what Australia does.  What do you think Europeans should know about Australians in the first place?   What can learn from one another?

I would understand it if Ukrainian nationalists probably do not know too much about our country and it is probably only due to the migration of Ukrainians to Australia after the Second World War and more recently – that the average Australian knows much of Ukraine at all. Speaking personally, when I was young I lived in town that attracted some Ukrainian migrants and I had the pleasure of learning about some aspects of the Ukrainian identity and history. I have always understood that Ukrainian independence was a worthy ideal given the tragic history of Ukraine in the period from 1914 till the death of Stalin. I think that many Europeans generally – and I would be unsurprised if many Ukrainians too – have some difficulty understanding who we Australians are. Suffice to say, that if I can understand that Ukrainians are people of the great Slavic section of the white race, but one with an identity of its own, then it is only a quick jump for Ukrainians to appreciate that we are a people of collective European ancestry but with a unique identity.

6. It is well known that modern Australia is a highly developed country.  What role did the White Australia Policy play (1901 to 1973) and by limiting the inflow of non-European migrants to Australia?  Why was this policy cancelled?

The abolition of the White Australia Policy was part of the liberalization that swept all European societies after 1945. It was undermined in various legal (sic) ways, then piecemeal, then with falsehoods about it only being modified. It was abolished as part of the process which changed the dynamics of our ruling class, making it more able to adapt to the internationalization and then its globalization. I regard it as treason.
If I may be dramatic: I had the great privilege of being of being born into ‘White Australia’; I have resolved that my children will die in White Australia.

Australian multiculturalism was cleverly instituted. When it was proclaimed in stages from 1971 – 1973 it essentially only involved Europeans. It was a device to keep Europeans apart and to prevent dynamic fusion of blood and new cultural elements into Australian’s native base. Later it was developed to incorporate other groups. The game played today is hat the very definition of Australia is that it is a multicultural nation. The problem is that some of the cultures are so alien to the original base and to each other that it represents a zoo. It is also an ideology beyond criticism and lauded up in the press and media and is part of the education system.

8. What were the causes and consequences of the ethnic clashes in Australia in 2005?

You obviously refer to what we call the Civil Uprising in the Cronulla area of Sydney in 2005. This resulted from over a decade or more of harassment of European people, particularly young women, by men of Middle Eastern backgrounds. I have written extensively on that. Ultimately, it produced a week or so long upsurge of elemental patriotism which included some wild disorders on the Australian side and then targeted revenge violence. It was a watershed in Australian race relations. Massive amounts of money have been wasted by governments preaching tolerance and diversity propaganda and the matter has been the subject of extensive media propaganda. I continue to defend the Australians who rose up.

9. Are you satisfied with the economic policy which is carried out in Australia? If not, how it could be improved?

Our country is being recolonized by the global economy generally and by certain Asian states (especially China). This means that, through a series of free trade agreements and agreements on the free movement of capital and more-or-less labour, we are in a lot of trouble. Housing, land, businesses and farms are being bought up. Australia should trade (of course0 but we need a policy that leaves the vast wealth of the country in the hands of our people.

10. Europeans and people of European descent around the world currently faces many challenges, among which are worsening demographic situation, the attack against traditional family values, propaganda of various perversions and attempts to destroy national identities.  In your opinion how should Europeans should fight against such dangers?  is this possible within the limits of dictatorship of the liberal democracy?

I agree with your basic assessment of some of the challenges that Europeans face. It is necessary to construct a leading party in each country, linked through to any and all patriotic community based structures, fighting in every way (electoral, street-level, social and in cultural structures) against the establishment power. I agree with you that liberal-democracy is a dictatorship. It rules in people’s minds as much as through institutions. We have to change the rules on this system, adopting language of our own, criticising it at every turn, pointing out its link to globalist capitalism and its hypocrisies. We must also build a community effort against it.

11. In your opinion how (positively or negatively) does the particular geographical isolation of your country-continent affect the political and economic processes in Australia?

Australia is certainly a country-continent and geopolitics needs to be studied closely as a science. I have just co-authored a pamphlet on The True Cause Of Australian Independence where we discuss the problems of winning separation from the New World Order and the globalist economy. Our isolation is a factor that is positive in achieving this, but it can be overstated. Australia is too close to Asia to relax. It is because Australia is being opened up to Asia that we are in mortal danger of submergence. Our leaders now say we are “part of Asia”. Our aim must be to get out of Asia, if I may use that non-nonsensical expression of bad geography.

12. Now in Ukraine a lot is said about the dominance of corruption, especially among politicians, but nothing is being done to overcome this shameful phenomenon. Is there corruption in Australia? If ‘yes’, how the society in your country is struggling against it?

We nationalists joke that we have a politically criminal traitor class that has sold our country to any and every imperialism, but many of these crooks enrich themselves. But worse. We have widespread sexual and economic crime that beggars belief. Australia has a long tradition of all this and it has remained a cancer in our body-politik.

13. We, Ukrainians, are grateful to Australians for the support, expressed for our nation, which has become the victim of Russian military aggression. How does your party see the further development of Ukrainian-Australian relations? In your opinion what joint projects could facilitate mutually beneficial cooperation between our two nations?

Nationalists here were saddened by the conflict between Russia and Ukraine. Most of us can see that Russia was unreasonable in its demands on Ukraine but we can see that Russia was worried about the ‘Western’ penetration of Ukraine. We also say this because it seems that ultimately some forces tried to take over the Ukrainian freedom movement and direct it towards NATO, the EEC, the IMF and Israel. Certainly the present Ukrainian government supports those political roads. I think these positions are really anti Ukrainian. I would go far out on the limb here and say that if the Ukrainian nationalists fought these globalist forces, it might find a change n Russia’s attitude too. The more pressure brought on the Ukrainian authorities by the true nationalists and perhaps a future Ukrainian government could negotiate a satisfactory peace with Russia.
We would always pressure our governments in Australia to have a friendly attitude towards Ukraine. Perhaps a future nationalist government in Australia would look for a friendly relationship with Ukraine. 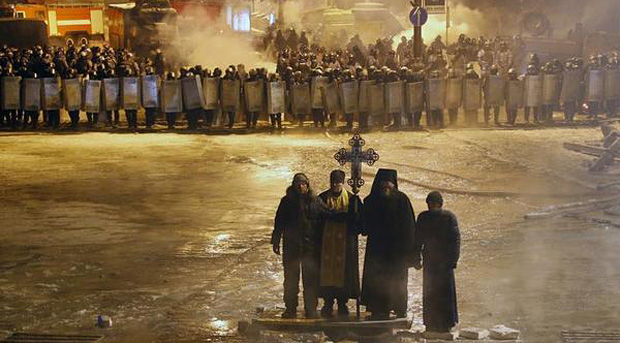 A free Ukraine outside of NATO and the EEC, and one places the great resources of Ukraine under the ownership of its people would be a beacon to the nationalists of all countries. It too could inspire the people of Great Russia to urge their political leaders to be on the best terms with Ukraine.

I thank you for your kindness in conducting this interview.”